Killing Stalking: Violence, Gore... and Love? (Or the Worst Relationship Ever?)

It is currently 4:11 am on Friday night (I guess technically Saturday morning) and as I was trying to sleep I remembered that I had a post to write! So I figured I don't need sleep anyway so I read all 13 chapters of this manhwa (it's Korean so it's not a manga) online and now I get to tell you all about it. I found out about "Killing Stalking" from Tumblr (it was actually my sister who told me about it first because she had seen it on Tumblr and decided it would be something I was likely to enjoy) and basically all I knew was that the people who liked the gay ice skating anime, "Yuri on Ice!" had now turned their attention towards this gay Korean horror manhwa for whatever reason.

Alright now here's my least favorite part of these posts, the synopsis. "Killing Stalking" is the story of this creepy stalker, Yoon Bum who is obsessed with his classmate that everyone likes and reveres, Sungwoo. One day Yoon has a great idea and decides he should break into Sungwoo's house and get off to the smell of him while he is not home. Whilst he is doing this he discovers that his perfect Sungwoo is actually a serial killer and is consequently kidnapped and tortured in Sungwoo's basement. Yoon Bum is then torn between the dilemma of staying to be with the abusive psychotic "love of his life" or escaping/ trying to get out. You might think that escape should be the no-brainer choice, but not for Yoon Bum! He is so mentally deranged that he gets excited at the thought of spending time with Sungwoo. Eventually stuff between the two gets even weirder and they form a weird sort of sexual relationship where Sungwoo dresses up Yoon Bum to look like his mom to do house chores and cook for him, and they have sex, but then Bum tries to escape one day and Sungwoo freaks out so bad he cuts Yoon Bum up pretty bad. But yeah, that's basically the gist of it! 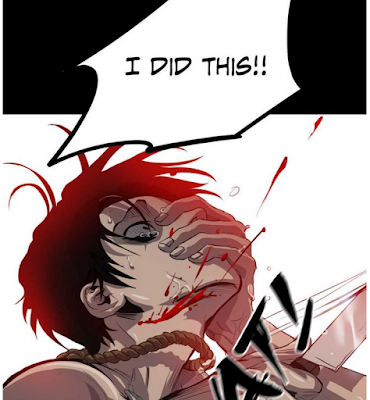 My thoughts on this are kind of scattered. I went into it thinking it would be the next thing I would be obsessed with since I loved "Yuri on Ice!" so much and a bunch of the fans of that now currently love "Killing Stalking" but unfortunately I am just not that enamored by this. I mean yes, I am interested to see what exactly the point of this manhwa is and where the story is going to go, but if I don't read the chapters as they come out or if I stop keeping up with it, it won't be the worst thing in the world for me. After I finished reading it I went onto Tumblr to see what people were saying about it so I could perhaps clue myself into what I was missing and it was basically just a lot of people debating about whether or not it was okay to glorify the relationship between Sungwoo and Yoon Bum (which I personally think shouldn't be glorified because IT ISN'T A GOOD RELATIONSHIP!!!!) I just think that a lot of the hype I saw surrounding this work was misplaced and I wish people were reading it for the story and not just the gay subplot. 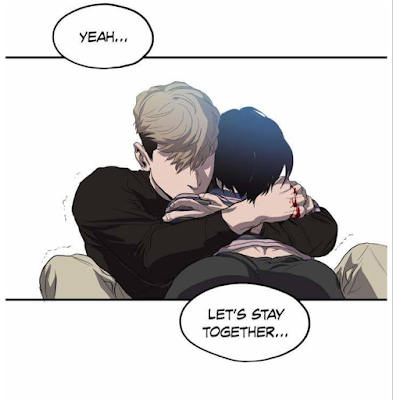 From a storytelling standpoint, "Killing Stalking" excels at suspenseful moments. There were times when Yoon Bum would try to escape (or even the first time he tries to break into Sungwoo's house) that had me freaking out because I was so anxious and needed to know what was going to happen. It is also a very gory manhwa and it being in full color doesn't really lessen the effect of it at all. (Although I do really enjoy reading something in color for once!) For my final comments on it, I would say that I do enjoy it as a whole because it is really effective as a psychological horror and the art is really nice. I can't say that I would recommend it to anyone simply out of fear they might never speak to me again, but since I don't know you, go ahead and read it! There isn't really anything for me to compare it to either because of how unique it is, but I guess if you want the Tumblr comparison that everyone has been giving it would be Jean and Levi from "Attack on Titan" are featured in the horrifically dark Korean version of  "Yuri on Ice!" that nobody ever wanted and that everyone is now reading.