March has been a rough month for screenings, so I've decided to get back to posting about things other than reviews, which has honestly been a popular request for a while now.

If you don't know what the Box of Dread is I'll take a moment now to explain. The horror news website Dread Central has started packaging up some of their horror swag and sending it out as very cool kind of blind box. For $20 a month or $57 for 3 months, you can take part in the pleasures of working in the horror industry. Here's what I received today: 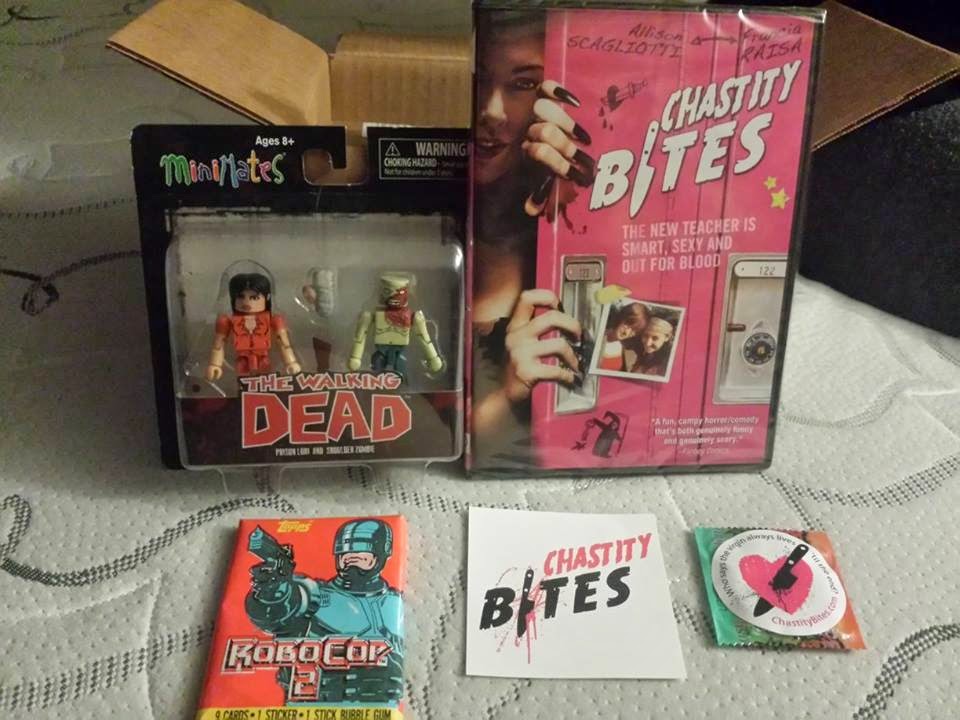 Pictured above is the contents of what I consider the best Box of Dread to date. I must admit that I'm a bit biased as John and Lotti Knowles have become personal favorites of the Overlook Theatre but even after taking that into consideration the "Chastity Bites" pack Dread Central put together is perfect for showing a special someone a horror flick. And if you don't have a special someone, they included toys and cards to make sure your night is eventfully nonetheless. Keep in mind these Boxes of Dread do vary box to box, so if you think Jail Lori is a lame character, I'm sure others got a different set.
Honestly, I find myself forgetting about these boxes every month so when they show up it's always a pleasant surprise, I highly recommend signing up for a box.

Beware Boxes of Dread are meant for hardcore horror fans only!!
Order yours here.
Posted by Lord Battle at 11:34 PM No comments: 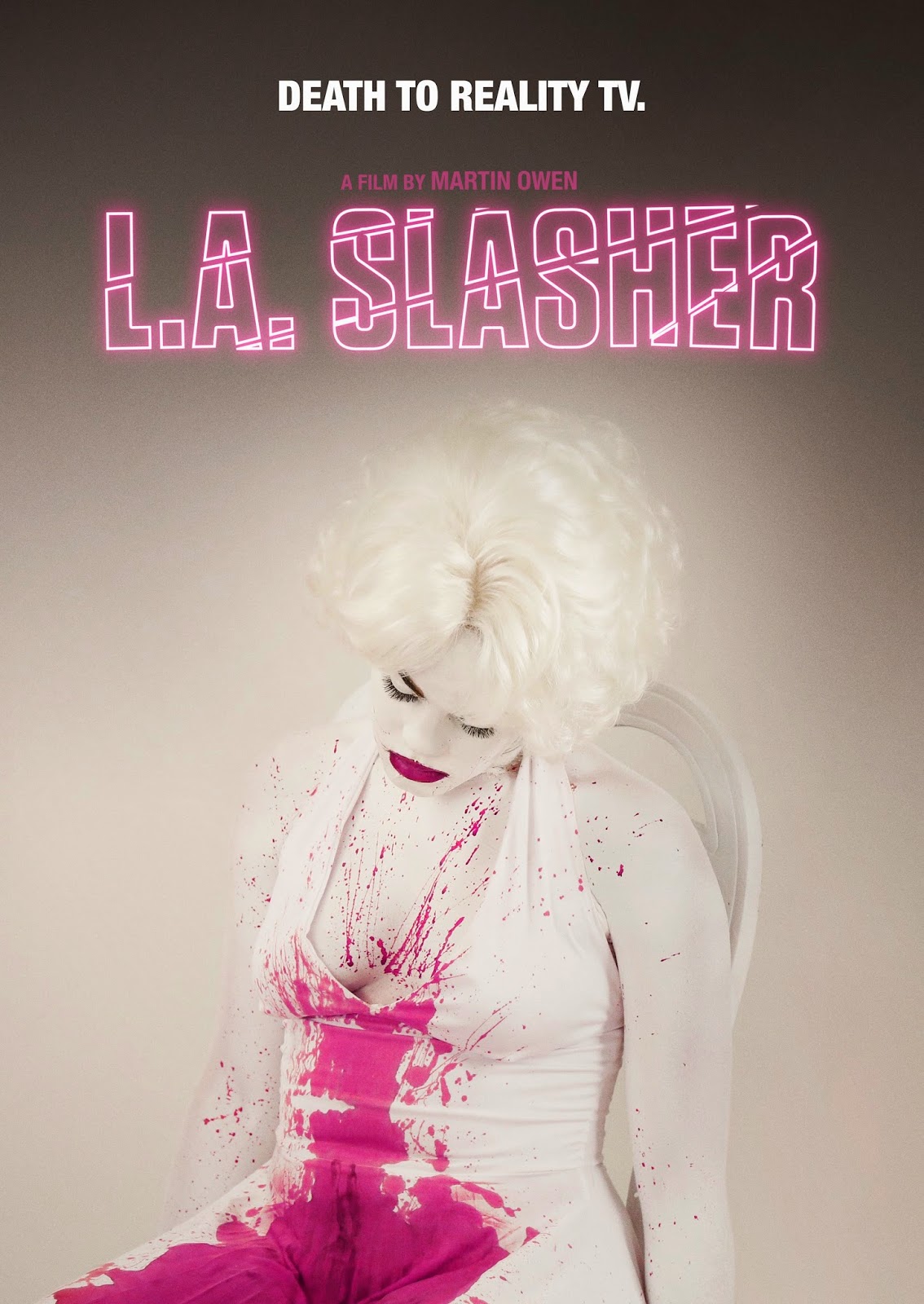 This awesome promotional poster was sent to me in an email earlier today and I must say, while I do like the first one more, this is still pretty awesome. In fact this poster couldn't have come at a better time, seeing as I was feeling extremely tired but still planned on posting something after I worked my two jobs. But the best part about this gift from the L.A. Slasher had to be what they wrote: "To my #1 fan, it's true, they Do bleed pink". If you don't know by now I, Lord Battle, really am L.A. Slashers #1 fan and I am incredibly excited they noticed! Attached to the email was this press release I'm very excited to share:

Incensed by the tabloid culture which celebrates it, the L.A. Slasher publicly abducts a series of reality TV stars, while the media and general public in turn begin to question if society is better off without them. A biting, social satire about reality TV and the glorification of people who are famous for simply being famous, “L.A. Slasher” explores why it has become acceptable and even admirable for people to become influential and wealthy based on no merit or talent - purely through notoriety achieved through shameful behavior.

Says producer Wright, “We are very optimistic about the commercial success of L.A. Slasher, given the explosion of Twitter and Facebook followers on our social media platforms. It's pretty amazing."

Sollinger adds, “The L.A. Slasher is a character that everyone can relate to. He is angry and frustrated with the often toxic role celebrity plays in our society.” Added writer and director Owen, “We are putting a funhouse mirror up to fame. The movie is vibrant and exciting and I know whoever sees it will be changed.”

Riffing on familiar television/film tropes, Brooke Hogan also appears as a reality T.V. star, along with a Socialite (portrayed by Korrina Rico), an Heiress (Elizabeth Morris), and real life scream queens Ashlynn Yennie (The Human Centipede), Barbara Nedeljakova (Hostel), Allison Kyler (Laid To Rest) and Carlee Baker (The Woman) portraying themselves. Actress Marisa Lauren appears as a stripper with ambitions of fame, and Abigail Wright plays a reporter trying to make sense of it all.
Posted by Lord Battle at 12:24 AM No comments: 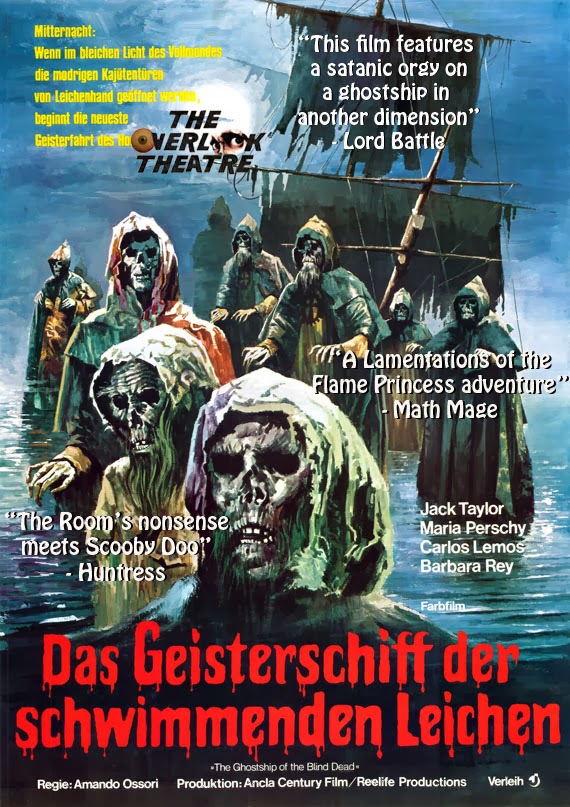 7 of 7 viewers "Liked" "Horror of the Zombies"/"The Ghost Galleon"/"The Blind Dead 3" (1974, Spain)
Here's what the citizens of the Overlook Theatre had to say:

Math Mage - "A Lamentations of the Flame Princess adventure plus some of the most ridiculous dubbing ever." - 3 Stars

The Great Hornito - "This felt like this was a really fun Italian, live action, crazy over the top Scooby Doo ghost story. Any one who loves pirates, bad dubs, sexy girls in bikinis and ghost ship exorcisms, should definitely check this out." - 4 Stars

Bug - "This movie was definitely not what I expected, but it was very entertaining." - 3 Stars

Unicorn Slayer - "Classic Italian style film making, the dubs, acting, and overall idea are painfully laughable. Amusing as a groan-inducing film, not for much else." - 2 1/2 Stars

Book Wyrm - "Interesting to say the least. No cohesive story but still sort of entertaining. Fun to laugh at!" - 2 Stars

"The Ghost Galleon" is the coolest of the films many titles so that's what I'll be calling it. There isn't much to say that fans of Italian horror won't already be expecting, the dub is amazing/awful depending on how you look at it, the story is dream like and absurd, and the characters are bad Hollywood impersonators while the undead are unique and brutal.

The story is the real oddball in this one as motivations and actions seem totally lost in translation. This normally would be a bad thing but "The Ghost Galleon" just starts to feel dream-like, just not in the typical film style, it feels more like a group nightmare. My favorite scene is also one the best examples of this group nightmare, as a model held captive in a very dungeonesk basement area of a building tries to escape. She fails miserably but the scene is defiantly strange and totally awesome.

In the header I stated that this movie would be perfect for a table top, and by "table top" I mean table top RPG's in the style of D&D. Although this movie would make an adventure far too brutal for any version of D&D and would need to be played in my favorite system "Lamentations of the Flame Princess". I can imagine a module now... It would read "The Ghost Galleon" and when you open it up you would see the same image the film opens with: 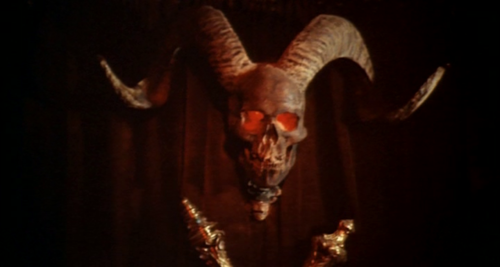 LotFP also is the perfect system because it focuses on the fact adventurers are greedy and go to extreme lengths for treasure. The people that make up the party in the film may not be adventures in the classic D&D sense but they would work perfectly for a modern game and everything in this film happens because of a cheap ploy to make money. In fact once they board the ship the way the film flows starts to feel like a group of friends in a dungeon, as players tend to be very weary until something happens. Even the speculation as to where they are and what's going on sounds like something a sleep deprived group of friends came up with. But what really makes this a LotFP adventure over any other system is the complete lack of hope and the sense of immanent doom both the characters in the film and players of the module would undoubtedly be feeling.

I could go on and on about how perfectly this film would work, so instead of ruining the whole movie let me just say this to the creator of LotFP... Raggi you gotta make this an adventure!!!
- Lord Battle

If you'd like to learn more about the Flame Princess I have his blog on my list of awesome blogs and here is a link to his games site.

*Based on the star ratings turned in by character reviewers, others viewed and got to "Dislike" or "Like" but that does not effect the rating.
Posted by Lord Battle at 7:04 PM No comments: