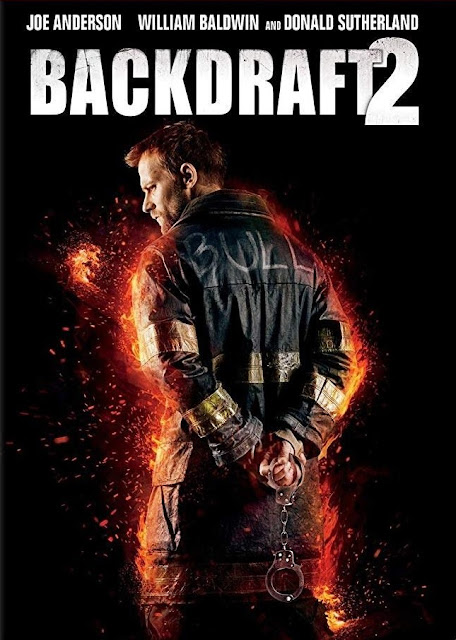 “A lot of dead kids” --- The somehow vacant line of Brian McCaffery (Billy Baldwin) as he and new comer nephew Sean look over the child carnage in the streets. They’re both wondering what Baldwin and the rest of the crew are doing back in Chicago (a CGI over Toronto) around the 20 minute mark of Backdraft 2 --- a movie, a sequel, and an over produced piece of streaming cinema that was never needed, especially today. But it makes for a dumpster fire of a bad movie night. Currently streaming over at Netflix, Backdraft 2 is something to behold when it comes to a bizarre cash grab stemming from a beloved 90’s pulp drama about the first responders who dive into flaming wreckage to save lives. The movie makes you feel the flames and the sweat, like the image of Bull (Kurt Russell) diving the flames and rescuing Chicago.

The filmmakers behind this film are aren’t known for sequels or for this level of poorly produced work. The original writer Gregory Widen gets a solo credit, Ron Howard and Brian Glazer are producers on it. Baldwin delivers bone dry lines with Donald Sutherland returning (a wacky performance of the let’s see if anyone is watching me on the monitor). The director, Gonzalo López-Gallego’s last feature, The Hollow Point, an excellent piece of border noir with Ian McShane. Something got lost on the way to the factory, maybe shooting in Canada and Romania for Chicago had something to do with it.

The main character is Sean McCaffery, played with earnest tough guy glaze by Joe Anderson, another actor whose past work is nothing on the direct to video work scale. Sean isn’t about the rescues or the flames, just drinking and punching the bad guys because he, like Baldwin, works for OFI, a firefighter with handcuffs. It’s revealed later that Sean is the son of Bull (Kurt Russell). He wears an old dust and grime jacket with the name Bull on the back to remind you of that. Baldwin, who looks to just show up on set for a moment to say some line of exposition or remind us that this is a sequel to Backdraft. A sequence taking place in a dumpster has Baldwin reviewing the last 3rd act and twist of the original with Sean. It’s good for a laugh over how the hell this ever got made.

If Sean is the son of Kurt Russell in B2, the studio probably went to the next generation of Russell with his son Wyatt, first. The pitch meeting probably went something like a scene from Arrested Development:

Studio (Ron Howard): We want to make a sequel to Backdraft!
Wyatt: So what’s my part?
Howard: Well you’re the real life son of Kurt Russell.We want you to play his son in the movie.
Wyatt: Ok. Anyone else coming back for the sequel?
Howard: Yes! Billy and Donald are coming back. If you say yes then we’ll make it for sure. It’ll be incredible.
Wyatt: But what’s the story?
Howard: You’re going to go after an arsonist who is really an arms dealer and plans to blow up Chicago.
Wyatt: So this isn’t about firefighters?
Howard: Well…We’ll have fire in it.
Wyatt: Real fire like the last movie?
Howard: Oh no. That’s just too dangerous. We have computers to create that now.
Wyatt: Thanks for your time, Ron. I’ll pass.

We have Chicago Fire on NBC to satisfy the lovers of the network pulp of drama involving first responders in the Chi-town area. Those who venture into this CGI flame engulfed sequel will not see a plotline about firefighters but a tale of lame family genealogy, dead kids, and a WMD that might blow up Chicago?! It’s all about the heroism and there are no heroes here to behold. Billy Baldwin is long gone in a ring of fire but the bad dude does get roasted with a flame throttle during the climactic shootout. It's the must-see moment of the movie.