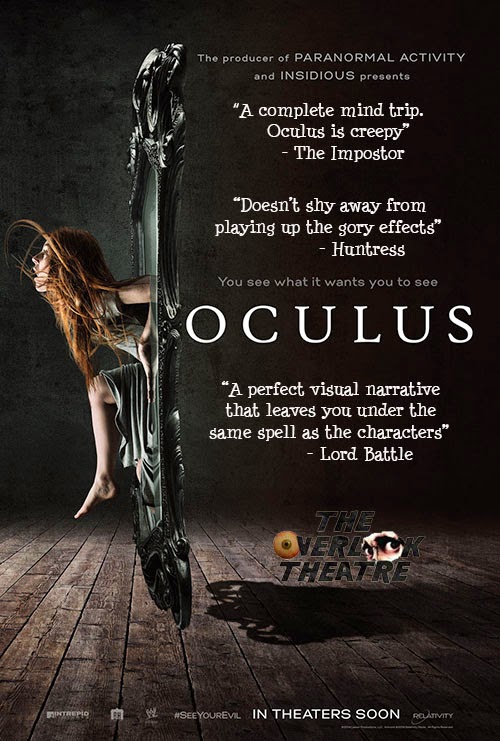 
Lord Battle - "Oculus is a fully equipped, armed with great writing, an awesome story and a perfect visual narrative that leaves you under the same spell as the characters." - 4 1/2 Stars

The Impostor - "A complete mind trip. Oculus is creepy, with a sort of gore that makes you cringe in your seat. Overall good acting and nicely executed horror film." - 4 Stars

Huntress - "This was an inventive and original story that didn't shy away from playing up the gory effects. It didn't go in an obvious direction and was a very exciting progression in modern horror." - 4 Stars

Ice Giant - "The CG eyes weren't overdone and the actors were perfect for their roles. WWE studios has up'd their movie selection." - 4 Stars

xKillDozerx - " This film deals with more then a few old school haunted house film trappings but manages to present them in a fun and exciting way that will make the most seasoned horror veteran smile." - 3 1/2 Stars

I will admit that I carry a large amount of doubt and apprehension when going to see a wide release/major studio produced horror film. I went into the theater negative guns blazing and fully ready to trash this film as a big budget "Amityville Horror" rip-off. I now have to swallow my pride and admit that I was dead wrong (Crypt keeper pun intended). Oculus is a fully imagined film based off of and written by the talented duo who brought us the short; "Oculus 3: the man with the plan" in 2006. This film deals with more then a few old school haunted house film trappings but manages to present them in a fun and exciting way that will make the most seasoned horror veteran smile. Through great acting, (even from the child actors) wonderful cinematography, lighting in all the right ways, and talented writing, we, the audience, are drawn in and made to question our thought process as much as the characters themselves. The pacing is excellent and never leaves the viewer waiting for more. At a running time of 105 minutes "Oculus" really used every inch of film time to give people all the creepy darkness they could handle. I'm not saying I have found faith in Hollywood but I am seriously looking forward to what Mike Flanagan and Jeff Howard have in store for use next (fingers crossed for more horror).
- xKillDozerX

I'd just like to elaborate on my comment above about the visual narrative. Oculus director Mike Flanagan really captures the essence of a haunting by bring us through the house in the present and flashing back to the horrors that took place there years before. And most often the horrors are nothing more than a bad memory that a child has distorted or given far too much thought and weight to over the years. "The Shining" is so powerful because Kubrick filmed the hotel in such a way that you could feel the negative energy trapped inside. If "The Shining" is the work of a mysterious auteur, "Oculus" is the calculated work of a bright student.
- Lord Battle

*Based on the star ratings turned in by character reviewers, others viewed and got to "Dislike" or "Like" but that does not effect the rating.
Posted by Lord Battle at 12:12 AM No comments: