Hello! Ribbie here with another dispatch from Fantastic Fest @ home. This time we’ve got something of a theme running through the features at hand; Family discourse!

A weeping woman stands on the edge of a bridge ready to jump to her death when a young girl covered in mud wanders from nowhere claiming to be her child. The woman climbs down from her death perch to comfort the child and help her find her real parents. They drive off into the Spanish countryside and are quickly pulled over by the police; they’re looking for an individual who has killed off a good number of cattle in the area. Things escalate quickly when the police begin to question just who this filthy little girl in the woman’s passenger seat is. One cop ends up with a severely aerated throat and the other ignites spontaneously...

EVERYONE WILL BURN is a blood-soaked satanic telenovela with curses and lore out the wazoo, featuring a spellbinding performance by leading lady, Macarena Gomez. The stellar production design and lighting make every set piece, death, and scare pop. The decades-long secrets of the townspeople make for delicious melodrama and make this small Spanish town feel truly lived in.

Sidenote: I thought it was interesting that the cast/story used little people and never acknowledged or used as crux for the way they’re treated.

Amazing Elisa
Elisa has lost someone close to her and is coping the only way she knows how: through her favorite comic. Elisa comes to believe that she has superpowers and must avenge her lost loved one while dispensing baseball bat justice to any wrong-doer she may encounter on the way.
But this isn’t just another revenge tale, we get an intense study of grief and the lengths we reach to cope in the face of extreme tragedy. Elisa and her father are broken from day one. Her father struggling to balance not just his sanity, but that of his daughter as well.
That’s not to say there isn’t some of that o’ so satisfying violent revenge that makes it on screen, but it isn’t the main focus and it’s all the better for that restraint.
AMAZING ELISA ends very similarly to a recent film I won’t name and both films reach emotional highs in their final reveals. It’s the only film from Fantastic Fest I’ve considered re-watching, and that’s saying something with the vast number of titles waiting for me in the queue.
~💀~

Flowing
Rain is bringing a mysterious gas from the sewers of Italy and causing people to confront their innermost fears and insecurities in a town where everyone seems to harbor feelings of ill will toward someone or another.
FLOWING establishes a creepy hallucinogenic tone from the start and rarely takes its foot off the pedal of dread in its 93 min run time. I love a good downer horror picture and FLOWING delivers that in spades. Every character on screen is going through some shit and wearing it on their face, some with scars of the past and some with age. And while a lot of euro horror in the past couple years has skewed more toward drama than horror, FLOWING mercilessly leans toward the latter.
Props for being one of the only films I’ve seen that utilizes the ultra-emotional avant garde act XIU XIU to great effect. Very excited to see what this filmmaker does next.
~💀~

Another Spanish film that begins with a woman about to plunge to their death from a high surface. What’s goin’ on out there? If there’s one through line in this year’s fantastic fest, it’s that everyone in the world has had quite the time these past few years. Familial discourse, loss, depression, sickness, distrust... The Elderly has it all.
Manuel has lost his wife of many years. She jumped from their balcony while he was still asleep and he seems to have no idea why she would end her life. Manuel’s son, Mario, doesn’t think that his father should be alone, so he takes him to live with him and his daughter, Naia, and his second wife, Lena. It isn’t long, though, until Manuel starts to behave strangely and is tinkering with disassembled electronics behind locked doors. There’s a record high heat wave causing tensions to simmer and Lena isn’t buying Manuel’s behavior as that of a distraught widower. And it isn’t just Manuel, every elderly person in town seems to be... off.
THE ELDERLY is a dread filled sepia nightmare sporting some truly frightening blink-and-miss sequences. Those with gerontophobia may want to stay as far away from this one as possible (and go to therapy).
~💀~
Posted by Oksana O. at 12:03 PM No comments:

Howdy! I’m Ribbie. I’ll be posting pocket reviews of films I’m covering for the 2022 edition of Fantastic Fest here at the Overlook Theatre. While I wouldn’t describe myself as a film critic, I have been considered a sort of tastemaker by some lowly individuals, and if you’re reading I have a feeling I know what your depraved ass might be into.

This year, like years past, offers a diverse selection of genre films ranging from horror to avant-garde to action to who knows what. The in-person event is currently crackin’ in Austin, TX, but for those of us that can’t make the trip, the FF@Home option gives you the opportunity to attend the festival from your couch or bed or sex dungeon at your leisure from September 29-October 4.

Join me here for coverage of all the wonderfully strange offerings the festival has to offer. 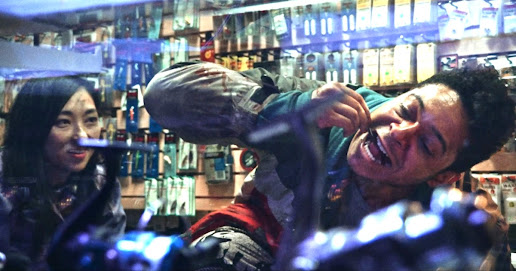 All Jacked Up and Full of Words

Wild, goopy odyssey through the homicidal clown-filled alleys of Chicago. Goes places you wouldn’t think are even legal to depict and turns the dial even further when you think it couldn’t get any more daring. I admire the restraint of filmmaker Alex Phillips, as it feels like they’re holding back, and that’s saying something.

The deformed bastard child of Born to Win and Brain Damage; ALL JACKED UP AND FULL OF WORMS is a film made for the midnight crowd and is sure to gain quite the reputation once it's unleashed on the worm-sniffing general public.

You’d be forgiven for rolling your eyes at the premise of DEEP FEAR, a claustrophobic horror film set in the catacombs of Paris. You’ve seen The Descent with its glowstick-lit crawls through cramped spaces; You’ll get that here. And As Above, So Below and The Catacombs have used the setting, so how much more blood can be rung from this particular cloth? A healthy bucket apparently.

If you can get past some of the foolish decisions being made by our protagonists, you’ll have a blast. Deep Fear utilizes its 80 minutes expertly, filling the run-time with a gaggle of tense moments and scares.

I went in blind, only knowing the setting, and I suggest you do the same for maximum effect.

Unidentified Objects
A sex worker asks a little person, their neighbor and the only person they know with a car, to borrow said car to drive her to see her sister. She isn’t telling the truth. UNIDENTIFIED OBJECTS is an equal parts playful and ominous road dramedy that plays fully with its cast and their place in society on their journey to meet beings from another world.
There isn’t a weak link in the entire cast, but Matthew Jeffers (who also acts as Producer) is MVP as the wounded Peter and I suspect this film and his performance are going to propel him into much deserved spotlight.
~☠️~ 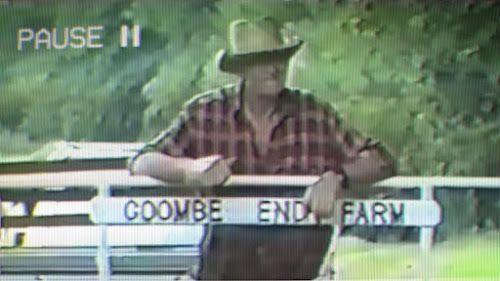 Life on the Farm
Meet Charles Carson. A farmer in Somerset, England with a penchant for filming almost every moment in his busy life, editing that footage together, and distributing the tapes to neighbors. With the tape’s cut and paste craftsmanship, Carson resembles a sort of 4H Wes Anderson, equal parts charmingly funny and painfully tragic. We watch our Farmer as he buries a beloved cat, births calves, and rides his tractor with a million dollar smile; All the while presumably moving the camera and setting up shots to make these videos something his neighbors would actually want to watch.
Charles Carson was a man ahead of his time and seemed to be bursting at the seams to express this fact, even if he didn’t know how to articulate it. LIFE ON THE FARM is a beautiful documentary with some truly strange visuals and a charismatic subject at the forefront.
Posted by Oksana O. at 5:50 PM No comments: