The Overlook creatures who were lucky enough to experience the very first Silver Screen Fest are still swooning from how much fun it was. And one person in particular is still hunting down people involved in the films we saw who are willing to let him pick their brain. So here it is - the last wave of Einstein's God Model interviews... for now. This time, KillDozer talked with one of the film's actors. 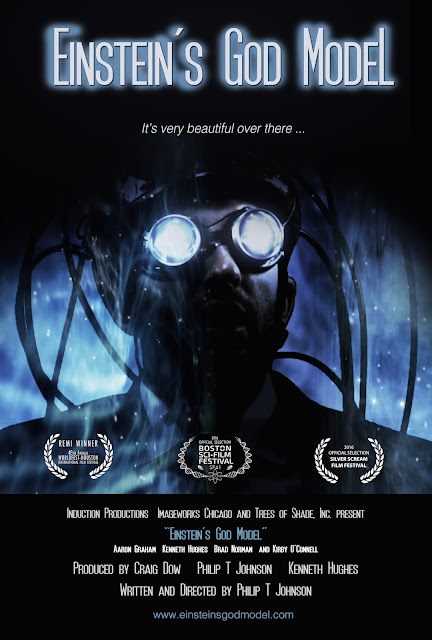 KillDozer: Let's start with a quick introduction of who you are and your relation to the film.

Brad Norman: My name is Brad DeMink Norman, I'm a character actor from Detroit by way of Chicago. I now live in Los Angeles. I've been in a lot of commercials and a few indie films. I play the role of Craig Needham in the independent film Einstein's God Model.

KillDozer: How did you become involved with the film?
Brad Norman: I was performing in the Musical Improv House Ensemble (MIHE) at the Second City Chicago with Aaron Graham (Brayden in EGM). He was already cast in the film and knew the producers were looking for someone to play Craig because a previously cast actor had to drop out. Aaron asked me if I'd be interested in meeting Phil Johnson about EGM. I talked to Phil on the phone and he sent me a script. A few days later Phil, Aaron, and I met at a Starbucks in Chicago and I auditioned with Aaron reading with me for chemistry. After we compared our thoughts a bit more Phil thought I was a good match, and I was excited about the role. Honestly, I didn't expect to be cast given the casual nature of the meeting, but Phil called me the next day and we were off to the races.

KillDozer: Your character goes through a transformation of sorts and ends up with a gift/curse. Did you have an idea of how to play the role before and after?

Brad Norman: From the second I read the script I loved Craig. Phil has a lot of natural ability to write characters, he could teach a college course on the history and science his screenplay is based on, and his jokes are a lot funnier than I think he even realizes. For me Craig really stood out as the character that changes the most drastically from page 1 to page 100 in the same story. I'm always on the lookout for characters like that because more often than not they're the characters I can sink my teeth into.

KillDozer: Craig is easily labeled the funny one in a group of very serious people. As the film continues and the audience learns more we find ourselves on an emotional roller coaster of sorts where it is revealed that Craig has a very real and moving inspiration to do what he does. As an actor what is easier to display on screen, comedy,or sadness? How do you prepare yourself for such a transition while filming? What is the best way to sincerely convey these emotions?

Brad Norman: Craig is META-SATIRE! Sometimes Craig seems like he's trolling the plot of the very story he's in and that is especially funny to me. But for every ounce of humor, there's a pound of pain in Craig. As his story progresses, he gets more relatable and sympathetic. Keep in mind that all of this is all a testament to Phil's writing of the character. As an actor, my approach was to find a sort of "emotional starting position" for Craig. Here's a highly intelligent and sensitive guy that's being tortured every waking moment of his life. He's haunted in every sense of the word. He's an exposed nerve. He turns to booze just so he can dull down his senses and maybe sleep every couple of nights. So I made a choice not to play him drunk, but hungover. Always hungover. Which turned out to be a great starting position for Craig's moments of rage and vulnerability.

KillDozer: I was lucky enough to see this film on the big screen with an excited audience. Have you viewed it with an audience? Do you feel as though your character comes across the way you wanted him to?

Brad Norman: I have not seen the finished film. I am now officially jealous of you. But I'm addicted to playback on a set. I watched and discussed all the dailies with Phil on set every day we filmed. I wanted him to make the movie he wanted to make and be the best third banana I could be for his story. I hope that came across in my interpretation of the character.

KillDozer: How close are you to your character it terms of personality?

Brad Norman: Well, I'm not as self-destructive as Craig but that's an extreme comparison. Craig's struggle with altruism, cynicism and innocence lost resonates with me though on several personal levels. Every creative person I know wrestles with those things from time to time.

KillDozer: Did you alter the character of Craig at all from the way he was written in the screen play? If so how and why?

Brad Norman: Not much tinkering on my end with Craig. For the most part I really liked what I had to work with in Phil's script. We cut a few jokes that weren't really playing in dailies, but that's comedy for you. You juggle twice as many ideas as you need and you tend to let the less successful stuff drop to the floor and roll away. In a feature, I think it's best to keep the stuff that serves the character and the story, and let the rest go when necessary without egos interfering.

KillDozer: Does an independent production inspire focus and inspiration or does a short shooting schedule and smaller budget only add stress?

Brad Norman: Generally there is little to no money in indie features for an actor, so you're free to make a choice to be involved based on your perceived merit of the project. I read a lot of scripts. I try to get involved in the ones that excite me. The inspiration you're referring to, for me anyway, comes when an indie filmmaker actually finishes their movie. Post production is a mysterious elephant graveyard of sorts where most indie features go to die. So when a passionate filmmaker actually completes their movie despite all the frustration, compromise and obstacles that inevitably occur, that's the part I find inspiring. "Idea Men" are a dime a dozen, I'm inspired by people who see their projects through to fruition for better or worse.
Shooting on a short schedule with a small budget isn't a crutch, it's a call to arms that demands the absolute best everybody has to offer. It keeps the adrenaline up and the momentum going. 14 hour days for next to no money, cold coffee and a bag of Cheetos might not be for everybody, but I enjoy the challenge to my work ethic. I'm from the Midwest, so it's hard to work me to my meltdown point. Even the worst day on set is better than the best day wondering if you'll ever work again.

KillDozer: The screening I attended inspired a lot of conversation about life, death, science and God. What do you take from this film and what do you hope others might receive from watch it?

Brad Norman: I think EGM is about life, not death. Maybe even a heist movie about death. I think death is for the living because the dead become memory and the living carry that memory on while the dead remain dead. If EGM, in all it's Sci-Fi Historical Fiction glory inspires a conversation about those huge, esoteric concepts then we've scored some extra credit while attempting to entertain people with a cool, twisty, enigmatic story.

KillDozer: Ok I have a few fun quick questions - if you could play a role in any film ever made what would it be and why?

Brad Norman: It's sort of a tie between Armand Goldman from The Birdcage and Ash from the Evil Dead series. Armand Goldman because he's in all the funniest and most touching moments of that script. Ash because I love to play characters who have the wrong idea about how cool they are until they're twisting in the wind.

Brad Norman: I kept an awesome custom wardrobe tee shirt from a movie I was in called America's Most Haunted. I love it and I still wear it. I have some props and storyboards from some of my favorite commercials. I don't keep too much stuff. I'm not the most nostalgic guy.

KillDozer: Would you actually risk your life to contact loved ones that have passed away?

Brad Norman: I would stack everything I own and set it all on fire to talk to my mom just one more time.

KillDozer: Which do you prefer Science or Fiction?

Brad Norman: I love them both! But I'm sort of a sucker/geek for historical fiction. I love creative speculation on actual historical events. I think science serves fiction and vice versa. I want those two things swirled together whenever possible.