Angels of Death; Is Zack Alive or Dead?

Hello again everyone, I have returned yet again. I just finished playing episode two of Angels of Death so I figured it was the perfect thing to post about! (Also making a second post about this game kind of commits me to finishing it because it'll give me more content to write about lol.) If you need a refresher on what exactly this game is and what happened in episode one check out my first post here: AoD Episode 1 Spoiler warning ahead! 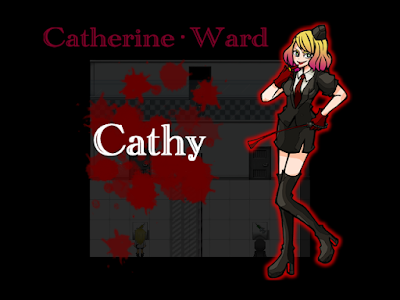 This episode begins with Rachel and Zack arriving on floor B3. They are met with iron bars and a surprise attack from some machine guns before meeting the floor master, Cathy. She is a crazy person who despises Zack and Rachel because she thinks they are stupid sinners and is committed to killing them. However as they progress along her floor she gives them a choice: they can either choose eternal imprisonment and escape death or they can continue on ahead to see what terrible things she has waiting for them. Of course being protagonists of a game with an objective to complete they decide to move forward and are faced with a series of trials. 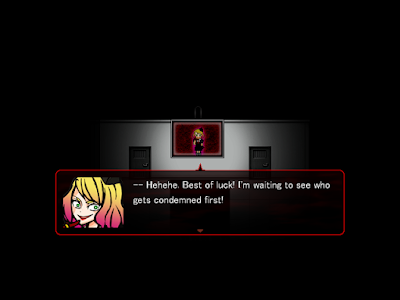 The first trial is an electric chair puzzle that Zack sits through while Ray has to figure out how to turn it off via doll heads. The second is a locked room filled with poisonous gas and only one gas mask. The two must cooperate and switch off wearing the mask in order to escape the room. The third trial is a room with spikes covering the floor and two ways to cross it. Zack and Ray split up and each take one way. The final trial involves injecting a syringe to open a door with a drawback that one syringe is filled with vitamins and the other is a deadly cocktail of poison. Zack injects them both into himself. 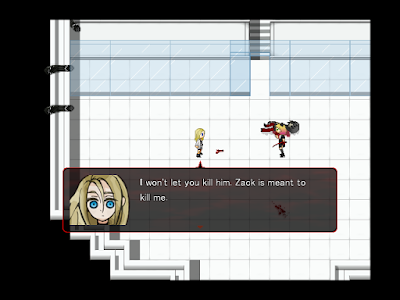 He then goes into a maniacal rampage and tries to kill Ray, so she runs and eventually the two end up in a room used for execution by guns and finally meet Cathy in the flesh. She then gives Ray a gun and tells them to face off to see who will kill the other first. However Ray will not shoot Zack and manages to talk him out of killing her, so Zack decides to kill himself. This infuriates Cathy. She walks into the room and tries to kill Ray but Ray takes the gun, finds out it was never loaded, pulls out another real gun she had in her bag that we didn't know about until just now, and shoots Cathy. Then Zack comes back to life and also helps to kill Cathy. Zack says he's fine and that it's only a flesh wound and asks where Ray got the gun from and we find out she witnessed a murder which is why she was going to therapy and that she's had the gun with her ever since. As they are riding the elevator to the next floor Zack talks excitedly about how they killed Cathy and as soon as the elevator gets to the next floor Zack passes out and we are left with a cliffhanger. Is Zack alive or dead? 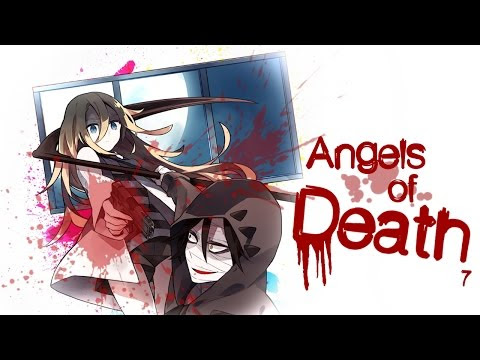 I thought this episode was pretty fun. It took me a bit longer to beat than the first one did and it had waaay more puzzles compared to the first one. It also gave us more insight into some of the backstory of the characters and showed us a new villain. I had a tough time with some of the repeating puzzles like the instance from the first episode where Zack is trying to kill you. That happened again in this episode and it was still just as hard to make the sharp turns with my keyboard but I managed to make it out okay. There was also the third puzzle where you have to cross the spiked floor on a rope ladder while being shot at by guns. That was annoying to do. I think if there had been a checkpoint or if I had been able to save then it wouldn't have been as irritating to do. However, I'm still enjoying the game and I can't wait to see what is going to happen next. Are they going to make it out of the basement alive and will Zack kill Rachel? We still have two episodes left so I'll do my best to complete the next episode ASAP!!