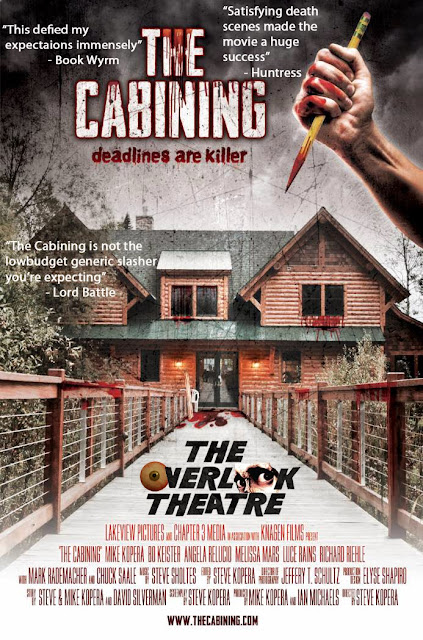 Book Wyrm - "This defied my expectations immensely. Surprisingly funny, this movie wound it's way into my heart. Bruce was a bit much though." - 4 Stars

Lord Battle - ""The Cabining" is not the low budget generic slasher you're expecting. In fact it's an intelligent self aware horror disguised as a comedy." - 3 1/2 Stars

Huntress - "A semi-self aware humor and satisfying death scenes made the movie a huge success." - 3 1/2 Stars

The Great Hornito - "This could have been a pretty good flick but Bruce was such a gigantic douche that he crushed the cabin to the ground." - 2 1/2 Stars

*Spoiler*
Having screened "The Cabining," I feel I have to mention a few things. First, it's got a bit of a slow start but don't let that keep you from watching it. Second, pay attention to plot points and keep in mind how it's effecting the story. I'll give you an example: upon finding the first victim's they instantly call the police and in turn the police shut the road down and trap them there. This normally does not happen in horror films since slashers love to hide their prey upside-down in closets, swinging out only as the cast has whittled down to a handful of 20 somethings...  So a real life reaction to the situation enforced the fictional one,  this is the type of cleaver writing that made this film so pay attention. Third, Bruce alone robbed this movie of a whole star. Once this film got rolling you could feel everyone get comfortable and relax awaiting a fun time in Shangri La, but Bruce would always manage to make people groan. He was just too unlikable and, to top it off, seeing him get a hot girl was just aggravating.
- Lord Battle

Thanks to Mike Kopera for sending this my way, it was a lot of fun and I only wish more screeners were this good!

*Based on the star ratings turned in by character reviewers, others viewed and got to "Dislike" or "Like" but that does not effect the rating.
Posted by Lord Battle at 8:35 PM