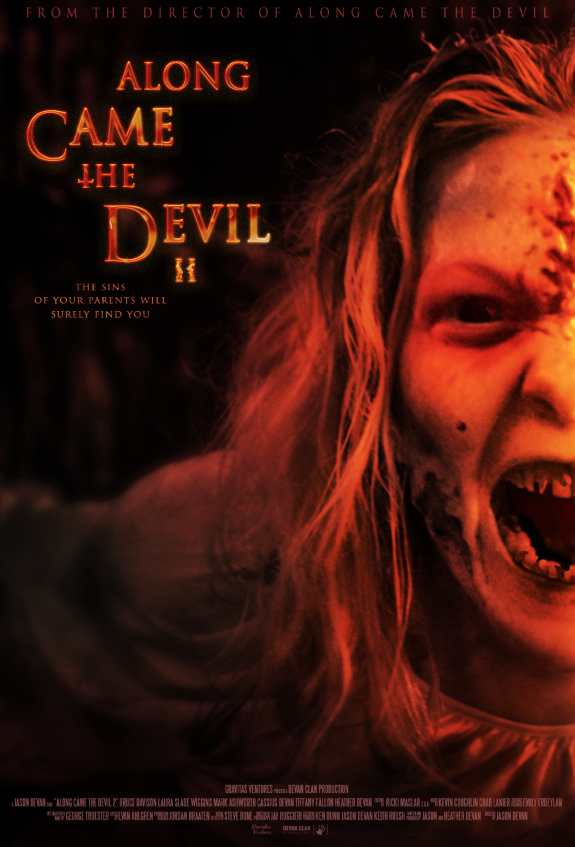 In preparation of watching this, I caught the first one, which was a surprisingly ambitious little film about a girl with an abusive past who finds herself tormented and eventually possessed by a demon, culminating in an exorcism. It has some narrative and pacing problems, but I was impressed by the lighting and cinematography, some of the scares are well-delivered, and while the performances are unbalanced, the leads are good enough to carry the film along.

All that said, the lack of budget showed, and the film relied a little too much on exposition to drive the plot. As a writer myself, I understand how this can come about, it’s simply easier and cheaper to shoot conversations than it is to keep scares themselves coming throughout the film. Though it hurts the film, it’s hard for me to fault it too much.

With that in mind, the director, Jason DeVan, showed a lot of potential and it left me interested in seeing what he could deliver with more experience and resources. Thus, I was excited to see what his followup had in store. Along Came the Devil 2 (ACTD2, from now on) immediately shows improvement over the first, kicking off with a solid, The Changeling-inspired scare sequence. The quality of filmmaking is clearly higher than the first, due in part to more interesting cinematography from cinematographer Jay Ruggieri. The increase in camera movement and the higher-quality daytime exteriors really show, and the nighttime shots help deliver better scares.

ACTD2 also features a fantastic lead performance from Laura Wiggins (Rings, Nancy Drew and the Hidden Staircase) as Jordan and excellent follow-up performances by Oscar-nominee Bruce Davison (X-Men, X2, Itsy Bitsy) as Reverend Michael and Mark Ashworth (The Magnificent Seven, Assassinaut) as Mark. It also features a fantastic performance from Cassius DeVan who is at his best as a creepy kid. Overall, these performances kick the film up a notch and help smooth out some rough patches that I’ll discuss in a little bit. ACTD2 picks up where Along Came the Devil left off, as Jordan, the sister of Ashley (the predecessor’s lead), is called back to her dreary home town because of a mysterious phone call about the degrading mental state of her sister.

When she arrives in town, however, her sister is nowhere to be found, but her estranged, abusive-but-now-reformed father is in town, and the Reverand knows something she doesn’t. We, of course, having just watched the original Along Came the Devil, know that her sister is possessed by a demon and locked up beneath the church.

This premise is both where ACTD2 succeeds over its predecessor, but also where it falters. The plot itself is far more interesting than the first. While the antagonist in the first is “The Devil” and his along-coming to do devilish things, ACTD2 has a much more human element, which is significantly more engaging. The main conflict, as best as I can tell, is Jordan’s struggle to figure out what happened to her sister. Unfortunately, in many ways, ACTD2 suffers from the first movie. Knowing what happened to Ashley means that any potential sense of mystery is diminished, and we, the audience, view the film waiting for the protagonist to catch up with what we already know. In addition, Jordan never actually finds much out about her missing sister. This causes the second act to drag heavily. While she runs into plenty of dead ends in her search, Jordan never seems to find meaningful success, which makes it difficult to stay engaged, despite the quality of Wiggin’s aforementioned performance.

During the second act, I ended up having a lot of questions about the nature of the film itself. As it drags, it also follows Reverend Michael and Mark (Jordan’s Dad) as they go about their day-to-day.

During this time, it becomes unclear quite what this film is trying to say. Maybe I missed it, but I couldn’t find a theme other than “The devil is bad, folks” which isn’t quite serviceable in modern cinema. It was around this point where I started to wonder, “is this a faith film?”. There’s nothing wrong with that, but I began to ponder whether being a faith film makes it okay to have such a simplistic plot. Obviously, in a faith-based horror film, the battle between good and evil almost always needs to be present to some degree. The Exorcist is the classic example, and this movie knows it and reminds us through constant references. The Conjuring and the rest of the Waniverse also fit the bill. In both cases, however, the battle of good versus evil is manifested in a few tangible, worldly forms, and lets us explore the human elements of horror. God and the Devil take a back seat to fear that all audiences can relate to.

For example, The Exorcist is really about a man’s faith being tested in the face of pure evil. Similarly, The Conjuring is about evil testing the bonds of a family. In both these examples, evil manifests as something other than the divine. In The Exorcist, it’s Regan and in The Conjuring, it’s a house. In ACTD2, throughout the second act, there is no human element to ground this struggle, and as there’s also no mystery, there’s just not much to it. I found myself waiting for how Jordan would fight the devil other than in the form of a futile search.

Around minute fifty, I found myself losing interest. We had no tangible devil, little-to-no conflict, and a protagonist that had seemingly nothing to do.

Then the third act started…

Here’s an excerpt from my notes, around minute 60 (excuse the handwriting):

At this point, I was really hoping something would emerge to introduce conflict, and holy crap did it deliver in spades.

Until the third act kicks off, Jordan’s father had existed within the movie but hadn’t really done much other than act as a vessel for exposition. Just as the movie starts to flounder, Satan himself grants us a little miracle, when he possesses Mark and turns him into an awesome, despicable villain, effectively saving the film. Let me lay it out beat-by-beat.

First, Mark starts drinking again, despite having gone sober following the dissolution of his family.

Second, Mark’s wife climbs into bed with him, unaware of his demonic eyes, razor-sharp teeth, and the knife clutched in his hand.

Third, Mark stabs his wife in the belly, killing her.

What the fuck is this movie?

Every preconceived notion I had about this film was instantly dispelled. I went from pondering the nature of faith films to wondering if faith films are allowed to depict necrophilia.

What follows is an amazingly tense third act as Mark goes full Jack Torrance and chases Jordan and Xavier (who until now had been little but a creepy kid to help facilitate scares) around with an axe. The remaining twenty-or-so minutes are tense and blood-drenched, shockingly so, given what had been depicted prior. It ends on an extremely exciting note, setting up for a sequel that I can only imagine would be completely bonkers.

Now, I’m not necessarily the kind of discerning viewer who needs an injection of necrophilia to make for a good horror movie. In fact, I tend to dislike movies that are overly cruel or mean-spirited. In ACTD2, however, it evokes such pure shock that I can’t help but respect it. The extreme twist this film takes really turns the film on its head and brings it from a mediocre-average demonic-possession flick to something truly special.

Is Along Came the Devil 2 a great movie? Not really. It still suffers its budget, and it’s hard to deny the dragging second act. That said, it’s definitely worth a watch. Jason DeVan is a talented filmmaker, and I suspect he’s a solid writer as well (don’t get me started on what low budget productions do to great screenplays). I’d love to see what he can do with a budget and maybe a little bit of producer oversight.

This is also a great vehicle for Laura Wiggins. I’d only been briefly introduced to the actress via Rakefet Abergel’s excellent short “Boo” (which is currently making the festival circuit. Keep an eye out for it and her future projects). As you’ll see in this film, she’s got a ton of talent and really helps carry the film with her passionate, convincing performance. Thankfully, if IMDb is correct, She’s lined up to feature in an impressive slate of films in the next few years.

If I had to make one suggestion before watching this, it’s to avoid the first. This film may be a tad more confusing because of it, but I think that by dodging it, you’ll be able to re-introduce some of the mystery into the second act. Then, you can check it out, as it functions well on its own.

Regardless, ACTD2 is an entertaining, surprising, and shocking film that’s definitely worth your time.

Along Came the Devil 2 will be available in select theatres and on VOD Friday October 11th.