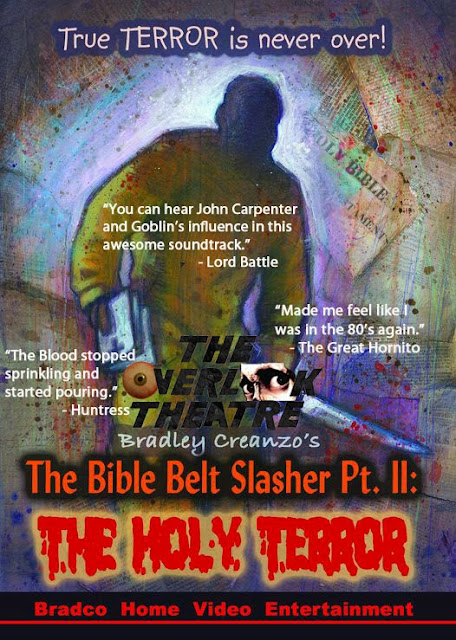 Lord Battle - "This low budget slasher put in a pretty good effort to feature it's story in the 80's. You can hear John Carpenter and Goblin's influence in this awesome soundtrack. I wish the slasher would have gained some more back story after having been run over, or donned a mask, but I guess I'll just have to wait for part 3." - 3 Stars

The Great Hornito - "Made me feel like I was in the 80's again. The Dungeon Master's sister definitely deserves an Oscar for this truly chilling performance." - 3 Stars

Huntress - "Slow build up but things got better when the blood stopped sprinkling and started pouring." - 3 Stars

Ice Giant - "Music was cool but the movie was horrible. Jason's one liners made my ears hurt and my IQ drop." - 1 Star

Thanks to the guys at Bradco Productions for sending me a copy of their film. I love slashers and will finish even the most terribly boring uninspired piece of crap, others can't even finish classics like "Halloween". The citizens that gathered to view BBS2 tonight were a pretty good mix and painted a pretty clear picture. This film definitely has something to offer fans of such films as "The Gingerdeadman" or "Leprechaun". Basically to  fans of slashers. With the amount of progress made from the original to the sequel, part 3 (if they choose to make one) may hit a much bigger audience. Also The Great Hornito's comment was referring to the fact that the Dungeon Master's sister looks just like Taylor Raftree who played Rebecca Belle or the girl who's sister was killed.
- Lord Battle

*Based on the star ratings turned in by character reviewers, others viewed and got to "Dislike" or "Like" but that does not effect the rating.
Posted by Lord Battle at 2:40 AM