This is going to be another crime filled weekend as Noir City 16 presses on at the Castro Theatre, and as it begins to wind down, SF Indie Fest takes over. Meanwhile, Mainland Noir conducts itself within the renovated walls of the Yerba Buena Theatre... 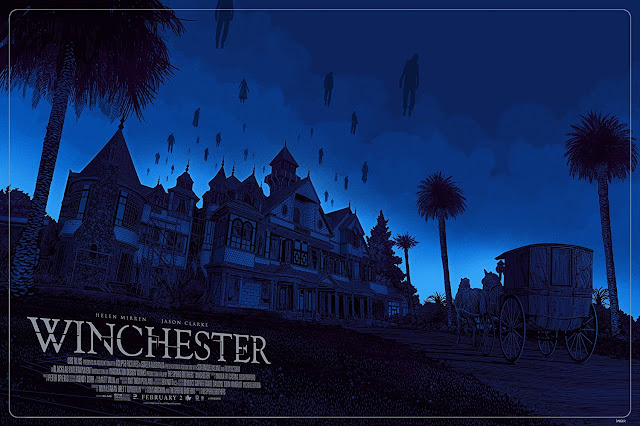 Winchester (2018)
Screening All Weekend (1hr 39min)
Biography/ Fantasy/ Horror (IMDB)
Inspired by true events. On an isolated stretch of land 50 miles outside of San Francisco sits the most haunted house in the world. Built by Sarah Winchester, (Academy Award (R)-winner Helen Mirren) heiress to the Winchester fortune, it is a house that knows no end. Constructed in an incessant twenty-four hour a day, seven day a week mania for decades, it stands seven stories tall and contains hundreds of rooms. To the outsider it looks like a monstrous monument to a disturbed woman's madness. But Sarah is not building for herself, for her niece (Sarah Snook) or for the troubled Doctor Eric Price (Jason Clarke) whom she has summoned to the house. She is building a prison, an asylum for hundreds of vengeful ghosts, and the most terrifying among them have a score to settle with the Winchesters...

Enter to win 1 of 5 of these posters at Birth. Movies. Death.! 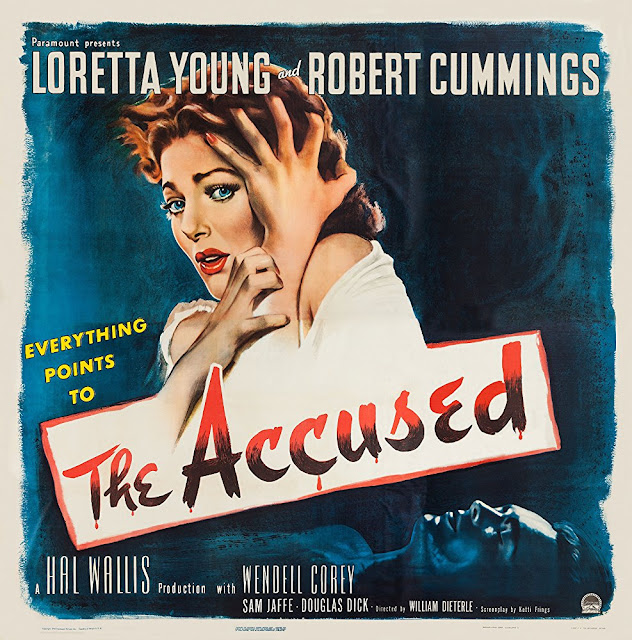 The Accused (1949)
Friday 2nd @ 7:30pm (1hr 41min)
Drama/ Noir/ Thriller (IMDB)
The Accused is a mystery melodrama with a predictable plot involving blackmail, attempted rape and murder. Wilma Tuttle Loretta Young is a school teacher who is assaulted by a student, Bill Perry (Douglas Dick), and, while defending herself, kills him with a tire iron. Frightened, she attempts to make the murder look like an accident. Wilma, despite the fact that she acted in defense, feels increasingly guilty about her actions. Wilma is further conscience stricken when she falls in love with the student's guardian, Warren Ford (Robert Cummings). Despite a good performance by Wendell Corey as a police investigator, The Accused is a rather predictable, routine melodrama, directed without any particular distinction by William Dieterle. 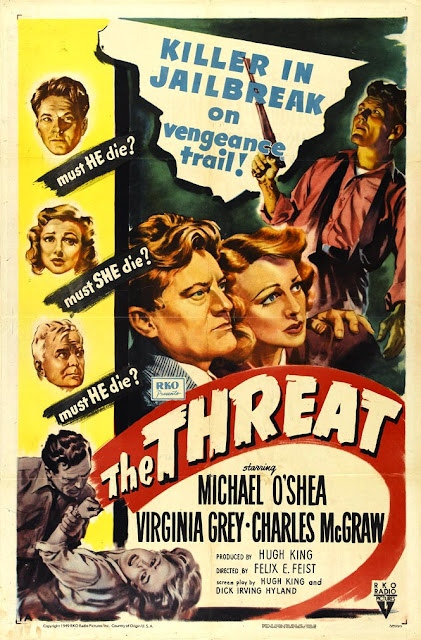 The Threat (1949)
Friday 2nd @ 9:35pm (1hr 6min)
Crime/ Drama/ Noir (IMDB)
Homicidal criminal Charles McGraw busts out of jail, kidnapping the three people responsible for his incarceration. The hapless hostages include detective Michael O'Shea, district attorney Frank Conroy, and nightclub singer Virginia Grey. McGraw makes no secret of his plans to kill O'Shea and Conroy once he has successfully made a getaway; he has other plans for Grey, however, and for a while it seems as though she'll willingly play along with him. The cat-and-mouse game reaches its peak of tension some sixty minutes into this 65-minute thriller. Sparse and unpretentious, The Threat contained far more excitement than many a more expensive, star-studded film noir.

Southside 1-1000 (1950)
Saturday 3rd @ 1pm & 5pm (1hr 13min)
Crime/ Drama/ Noir (IMDB)
This slam-bang crime yarn from the King Brothers (producers of 1950's Gun Crazy) is highlighted by shot-on-location scenes in downtown L.A., Hollywood, and San Quentin, crafted by much of the same team responsible for Gun Crazy, and directed by the man who made the influential Stranger on the Third Floor (1940). Don DeFore plays an undercover agent infiltrating a counterfeiting ring operated by sultry racket boss Andrea King. 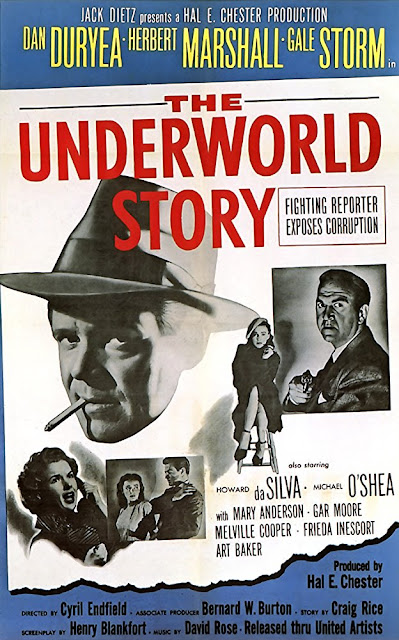 The Underworld Story (1950)
Saturday 3rd @ 3pm (1hr 31min)
Crime/ Drama/ Noir (IMDB)
This beat Billy Wilder's Ace in the Hole(1951) to the screen by a year, with a tale of a corrupt reporter (Dan Duryea) manipulating a small-town story for his own benefit. Dan Duryea is the disgraced reporter exiled to Gale Storm's small-town paper just in time to catch the case of an African-American maid charged with killing her socialite boss. Duryea could care less about justice—he wants to cash in on the woman's defense fund. 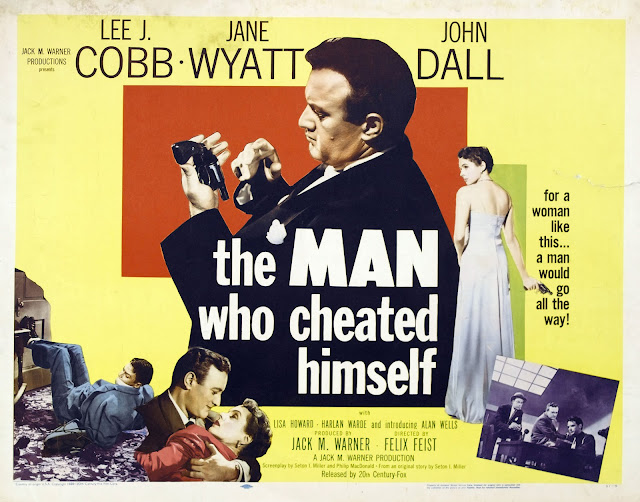 The Man Who Cheated Himself (1950)
Saturday 3rd @ 7:30pm (1hr 21min)
Crime/ Drama/ Noir (IMDB)
A veteran San Francisco homicide cop (Lee J. Cobb) spirals into a moral morass when his married socialite lover (Jane Wyatt, in a rare fatale role) "accidentally" bumps off her husband. Instead of playing it by the book (would that be noir?), he covers up the crime, only to have his younger brother (John Dall)—a rookie homicide dick—start putting together the pieces. This James M. Cain-style thriller gets maximum impact from its San Francisco locations, including a memorable climax at Fort Point. 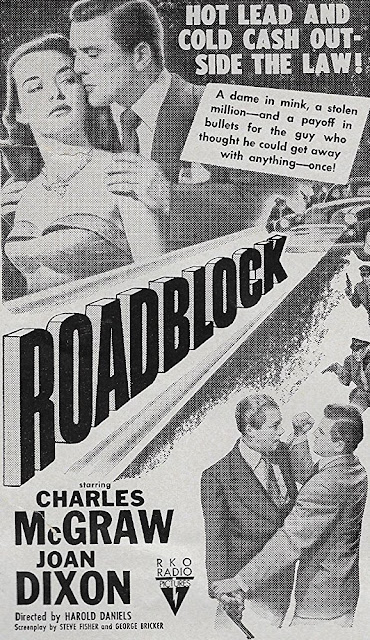 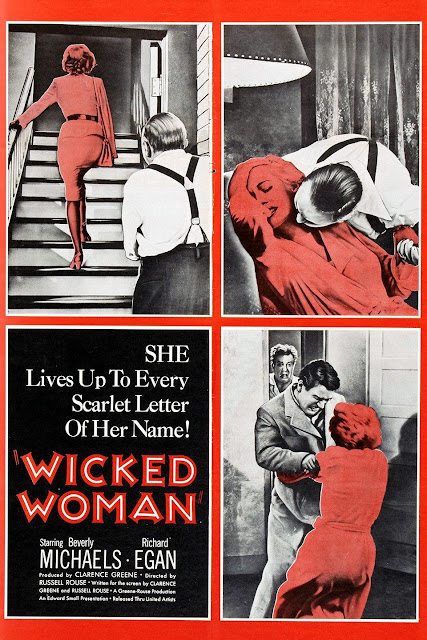 Wicked Woman (1953)
Sunday 4th @ 1pm, 4:20pm, 8:45pm (1hr 17min)
Drama/ Noir (IMDB)
In this racy little "B" movie, scarlet woman Beverly Michaels (Pickup) cons saloon owner Richard Egan into bilking his boozy wife out of her dough, then toys with the affections of slavering devotée Percy Helton (as you've never seen him before). She plans on dumping both and leaving a dust trail to Mexico. Michaels was definitely director Rouse's kind of woman: they married after making this picture—an extra twist to this juicy noir. Featuring a title song that's a cult favorite! 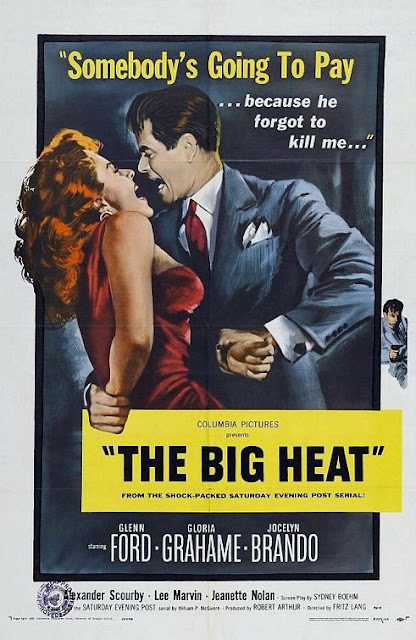 The Big Heat (1953)
Sunday 4th @ 2:30pm & 7pm (1hr 29min)
Crime/ Noir/ Thriller (IMDB)
Police Sergeant Bannion is investigating the apparent suicide of a corrupt cop, then is suddenly ordered to stop the investigation. Driven to unravel the mystery, Bannion continues probing until an explosion meant for him kills his wife. He resigns from the force and soon learns that behind it all is a powerful underworld organisation led by Mike Lagana and his cold-blooded henchman, Vince Stone. 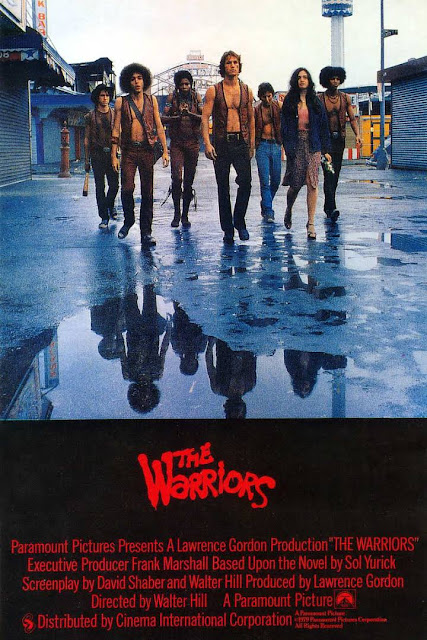 The Warriors (1979)
Friday 2nd & Saturday 3rd @ 11:55pm (1hr 34min)
Action/ Thriller (IMDB)
Walter Hill's hip, super-stylized action film unfurls in a dystopian near-future, when various gangs control New York City. Each gang sports a unique moniker ('The Warriors,' 'The Baseball Furies,' 'The Rogues'), with a costume underscoring its "theme"; each, in turn, is also responsible for one geographic area. Hill sets up the landscape as a massive, violent playground - replete with bridges, vacant subway tunnels, parks, abandoned buildings and the like, all ripe for exploration and adventure. As the tale opens, the titular Coney Island has traveled to the Bronx to attend a city-wide meeting of all gangs; at that event, however, the psychotic leader of a rival gang, The Rogues (David Patrick Kelly of Dreamscape) assassinates the head of the city's foremost gang, but The Warriors are pegged as culpable. This sends the gang fleeing through the labyrinthine city. With every thug in Manhattan in vicious, homicidal pursuit, they must also overcome all obstacles in their way. Throughout, Hill keeps the onscreen violence absurd, exaggerated and unrealistic, downplaying death to an extreme degree; despite this fact, the film sparked a massive amount of controversy and an ugly backlash for allegedly inciting violence and destruction in several theaters where it initially played. James Remar, Michael Beck and Deborah Van Valkenburgh lead the ensemble cast. ~ Nathan Southern, Rovi 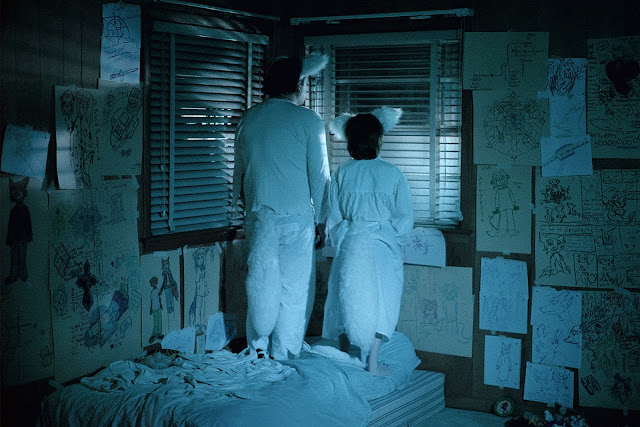 Rukus (2017)
Friday 2nd @ 7pm (1hr 26min)
Hybrid (?)
A hybrid of documentary and fiction, Rukus is a queer coming-of-age story set in the liminal spaces of furry conventions, southern punk houses, and virtual worlds. Rukus is a 20-year-old furry artist, living with his boyfriend Sable in the suburbs of Orlando, Florida. In his sketchbooks, Rukus is constructing an imaginary universe—a sprawling graphic novel in which painful childhood memories are restaged as an epic fantasy. He crosses paths with Brett, a 16-year-old filmmaker with OCD, who is working on a documentary about kinky subcultures in spite of his own anxiety. After an interview leads to an online friendship, their lives entwine in ways that push them into strange, unexplored territories. 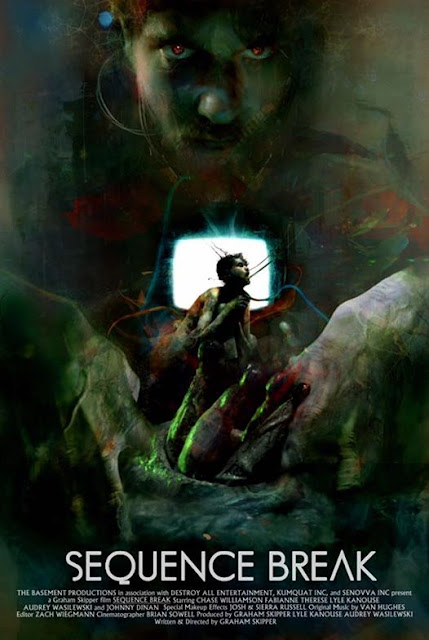 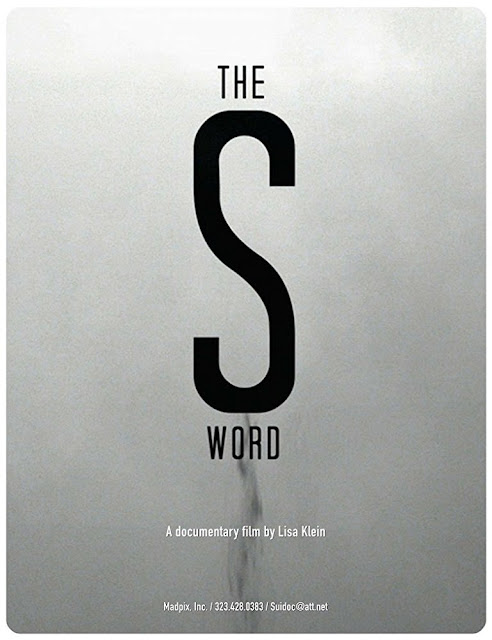 The S Word (2017)
Saturday 3rd @ 4:30pm (1hr 33min)
Documentary (IMDB)
A suicide attempt survivor is on a mission to find fellow survivors and document their stories of courage, insight and humor. Along the way, she discovers a rising national movement transforming personal struggles into action. 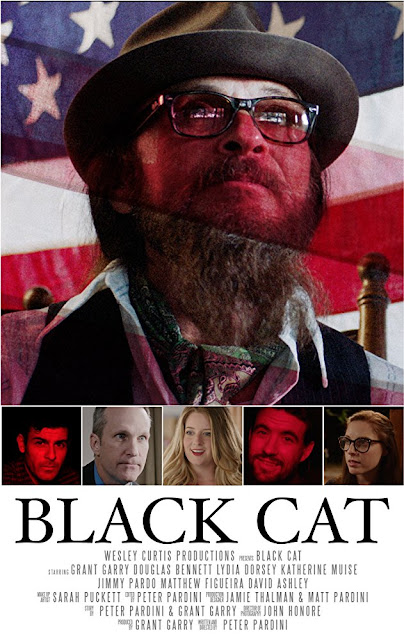 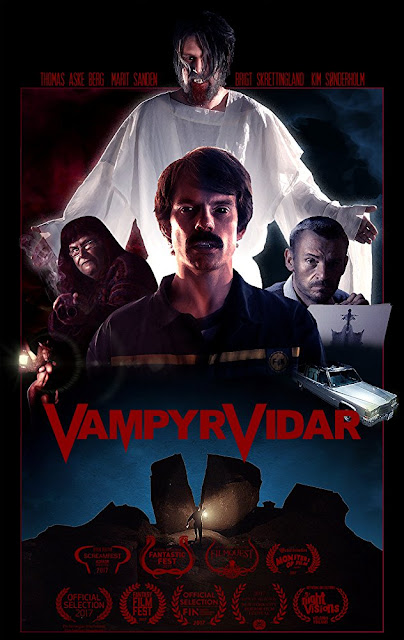 Vidar the Vampire (2017)
Sunday 4th @ 9:15pm (1hr 23min)
Comedy/ Fantasy/ Horror (IMDB)
A Christian farmer searching for a higher purpose to life, falls into sin and wakes up as the Prince of Darkness in the city of Stavanger, Norway. 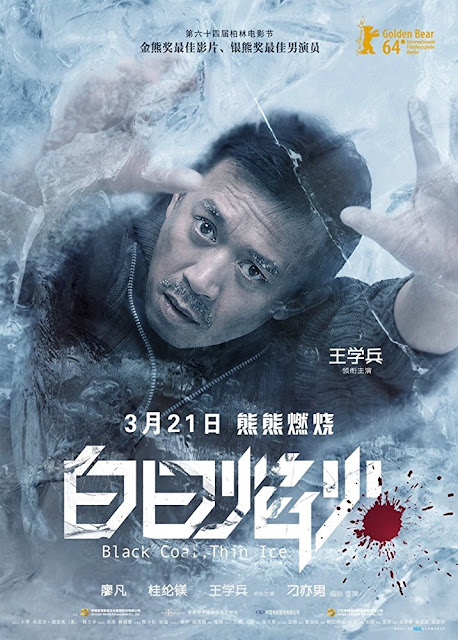 Black Coal, Thin Ice (2014)
Sunday 4th @ 2pm (1hr 50min)
Crime/ Mystery/ Thriller (IMDB)
Winner of the Golden Bear at the Berlin International Film Festival, this edgy, neon-soaked mystery begins with the discovery of a severed hand in a coal factory. Cop Zhang (Liao Fan) follows the case, but five years later, when he’s drinking heavily and working as a security guard, the body parts are still showing up. This sumptuous nocturnal noir has drawn comparison to David Fincher’s Zodiac, and is a landmark among Chinese crime films.