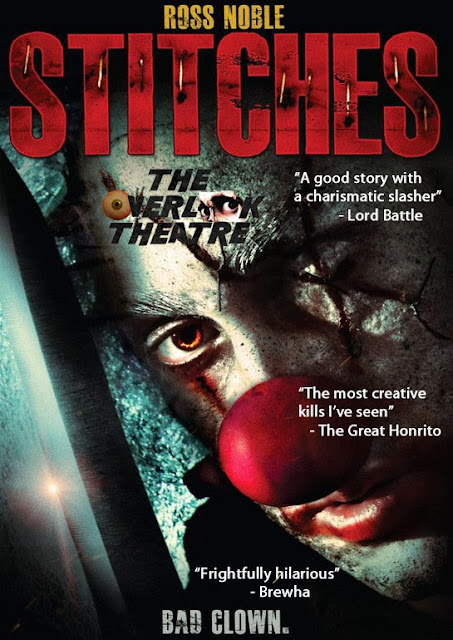 4 of 5 viewers "Liked" "Stitches" (2012, Ireland)
Here's what the citizens of the Overlook Theatre had to say:

Lord Battle - "A slasher with a comedy element is usually a scary thing to commit to, since it's almost always filled with awful puns and a lame gimmick for a slasher. "Stitches" however has a good story with a charismatic slasher." - 3 1/2 Stars

The Great Hornito - "The most creative kills I've seen in a movie. The only complaint I have is the killer clown was kinda boring." - 3 Stars

Math Mage - "I spent the last half waiting for the clown to kill the cast, but when he did I was bored and missed the teen drama form the 1st half." - 2 Stars

Huntress - "This showcased a lot of humor that didn't rely solely on pulling a rabbit out of a top hat or any other generic clown tricks." - 5 Stars

I found "Stitches" to be a pretty straight forward film. One thing I think is important to say is that the Tim Burton looking clown gang is not a big part of the film, even though they make the film seem much more interesting. The trailer I posted above doesn't show the other clowns as much as the other American trailer does but they are featured on the back of the DVD case too... Still, if you enjoy dry humor this is a solid film worth any slasher fans time.
While I was looking up alternate posters for this review I came across this Bloody Cuts short film that shares the name "Stitches". I thought it was pretty cool for a low budget short so I added it below, enjoy.
- Lord Battle


*Based on the star ratings turned in by character reviewers, others viewed and got to "Dislike" or "Like" but that does not effect the rating.
Posted by Lord Battle at 11:27 PM