Alien vs Predator or Reopening an Old Wound 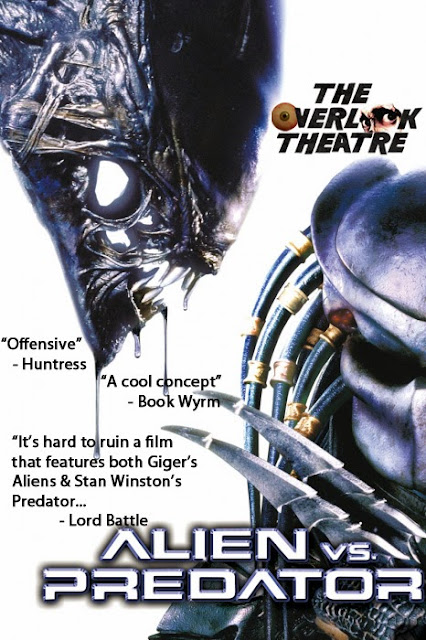 Huntress - "This was such an offensive god awful attempt to make classics modern, I could barely sit through it. This is one bad taste that won't soon fade." - 1/2 Star (Default to 1 Star)

Book Wyrm - "I think the movie had a cool concept, but was executed poorly. The predator was my favorite part, and I felt like the humans were unnecessary." - 2 1/2 Stars

Lord Battle - "It's hard to ruin a film that features both Giger's Aliens & Stan Winston's Predator. I would have made this film from a predators perspective. My version would start with him kidnapping a human to sacrifice to the alien shrine, then he would fight his way out. The film would be very minimal dialogue and a million times better than this insulting waste of time. A film I truly hate, avoid at all costs!" - 1 Star

Brewha - "Not really knowing much of either franchise, I really appreciate the movie for what its worth." - 3 Stars

Reviewing this is like reopening an old wound for some of us, but to a surprising majority of citizens that night, it was a first. The film contains two of the most interesting aliens to hit the screen. First is H.G. Giger's Alien, truly terrifying the first time you see it in action, equipped with acid blood, the ability to crawl and swim incredibly fast, and a brutal breeding process, the Aliens will survive as long as film exists.
Second, we have Stan Winston's Predator, a true big game hunter that travels the galaxy looking for his next skull to take as a trophy. Predator has become a legendary villain who appears to test many great comic characters, you can't consider yourself a true bad-ass until you've survived a predator. Here is a short list of the Predators past opponents: Batman, Judge Dredd, the Terminator, Superman, and Witchblade.
Writing about how cool each respective franchise is just makes thinking about this film all the more depressing. AVP is plagued with a boring plot that revolves around humans no one cares about, a ton of  what seems like leftover CG from the 90's, and a group of the lamest Predators to ever make it to the big screen. Honestly though, it seems that people who haven't had the joy of sitting through an "Alien" or "Predator" film think AVP isn't that bad... But then again do you want to trust a film opinion from someone who has missed out on these classics?
- Lord Battle

*Based on the star ratings turned in by character reviewers, others viewed and got to "Dislike" or "Like" but that does not effect the rating.
Posted by Lord Battle at 11:34 PM