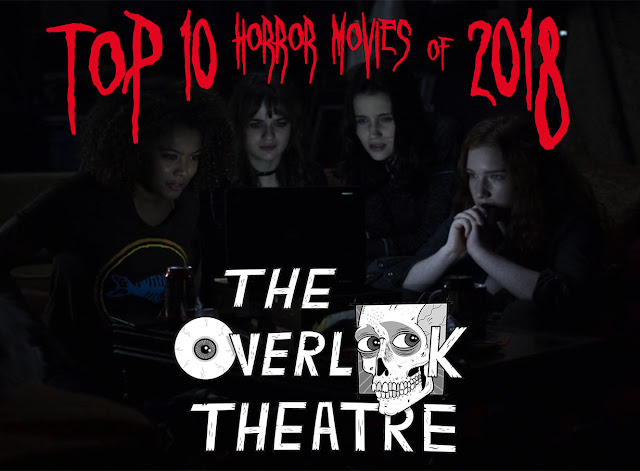 Hail horror film fans! This is Lord Battle speaking, remember me? Despite my lack of contribution to this blog, writing is now natural. And I say blog because I have decided to finally embrace the fact that TheOverlookTheatre.com is just that. I realized while putting together this list exactly how few reviews I had completed this year and couldn't be more bummed about it. 2018 had a very large number of indie and studio releases that could easily grab a spot on any top 10 list and it's a shame that I let films like Upgrade, A Quiet Place, and Butterfly Kisses go without a proper Overlook Theatre review/discussion and all because I was playing around with Wix and Squarespace trying to legitimize our content by getting off of blogger... A serious waste of time and energy and, although I would like to add an interactive calendar for all local horror screenings, I'll be returning to driving content in 2019. Who knows maybe a wizard of websites will fall in my lap and offer to take on this now 3-year task of mine. We'll just have to wait and see.

Every year the creatures are summoned together for a screening of a Krampus film, gift exchange, and verbal battle that needs to end in agreement. Honestly, this year was the smoothest creation of a Top 10 horror list (with heavy participation) yet. Thankfully, Math Mage remembered his formula from last year and we were able to get a satisfactory list done in record time! Note that the number following the film title is to total points acquired by the film. I included this little detail to help show how close some of these films really were (especially #1 & 2). 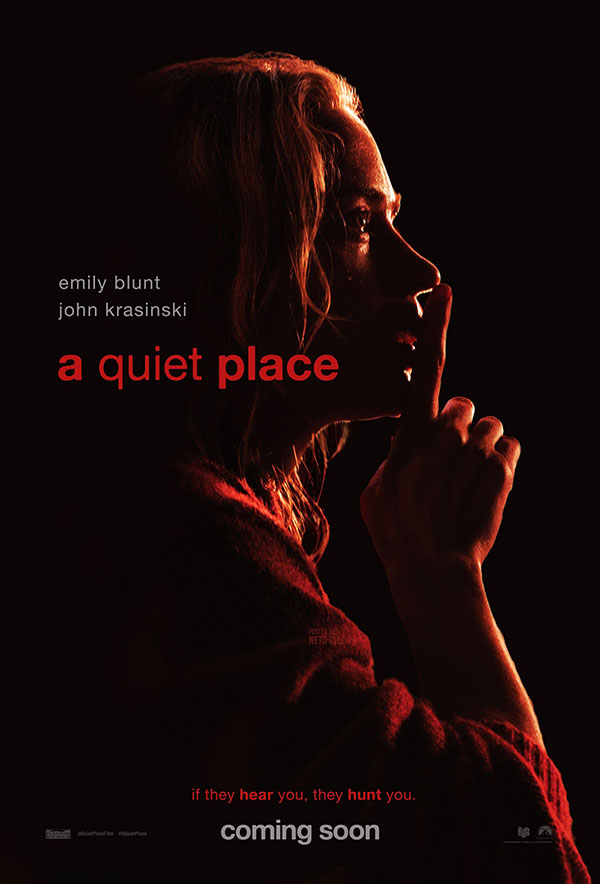 No matter how big your 4K TV is you will not get a full experience unless you are immersed and intimidated by a sound system. Seriously, A Quiet Place is 2018's Don't Breathe using a deafening blanket of silence to choke an audience into a suspense submission hold. The kind that makes you conscious of how loudly you are chewing your popcorn. I don't think I've ever recommended a film with this idea in mind but, if Twilight Zone sci-fi narratives aren't your thing watch it for the on-screen chemistry between Emily Blunt and John Krasinski. 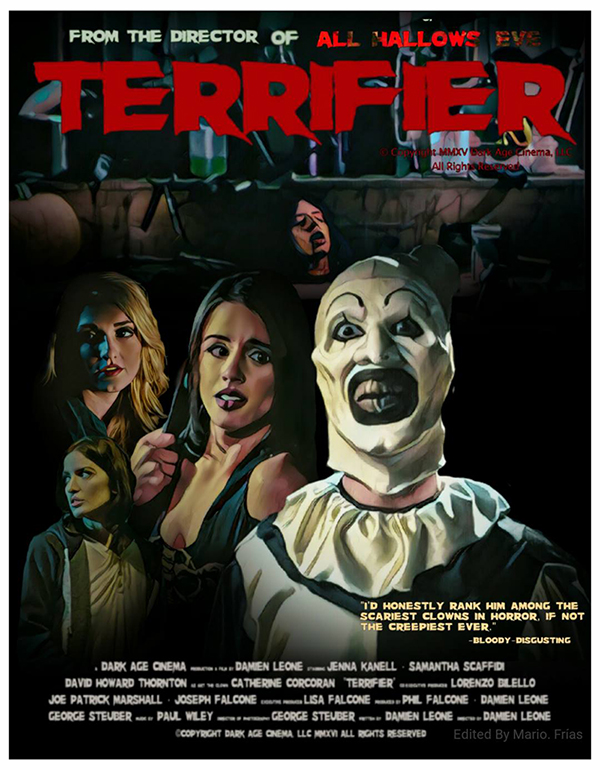 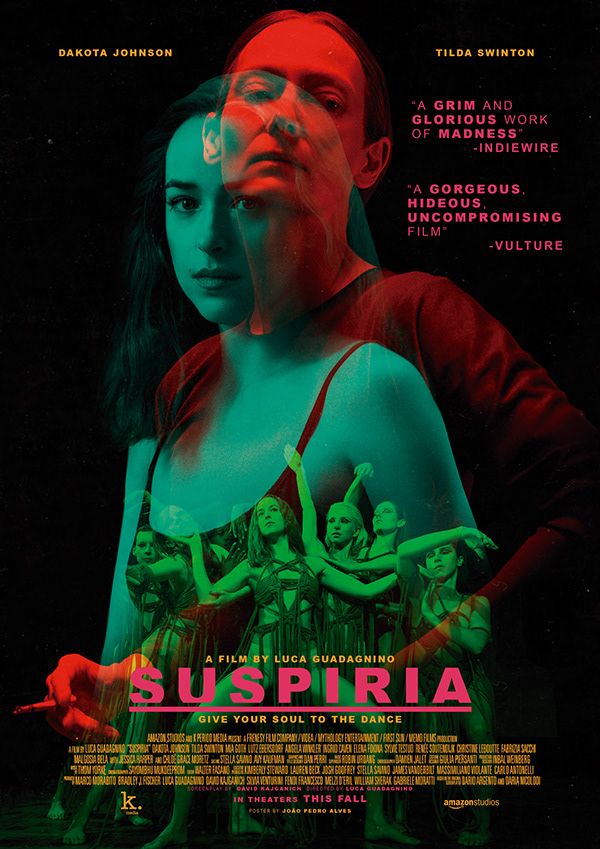 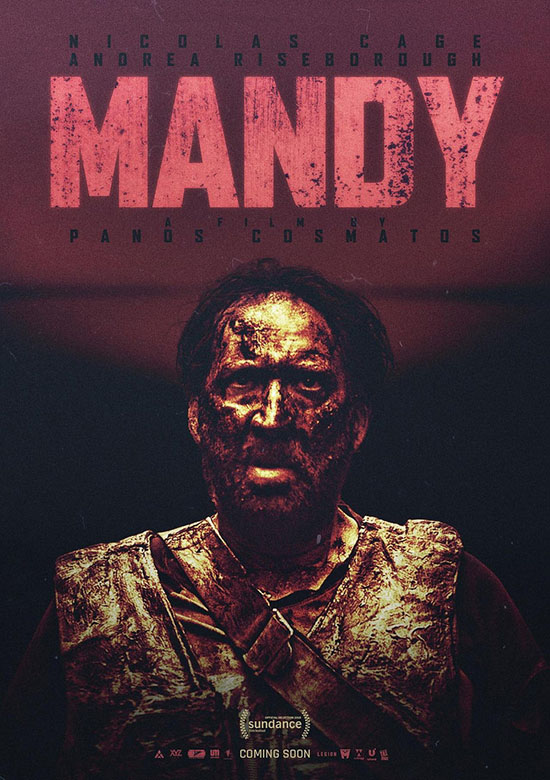 The day Mandy came out we had a special VOD screening. Almost every creature in attendance had just left an 8 work day. Those who had seen Beyond the Black Rainbow were now drinking coffee in a wonderful haze of anticipation and fear as no one could fathom what exactly was in store. That night most of us apparently had our pretentious hats on as the crowd of 8-11 was completely silent. I personally remember mustering up all of my energy to intently focus and analyze the many layers of visual narrative. It wasn't until the middle of the 3rd act when The Impostor turned around and said "Is anyone awake!? I don't understand how ya'll so quiet!". At the time I remember being completely caught off guard by this comment but after a second viewing at the Alamo (which intro'd the film with clips of Nicholas Cage screaming) I understood just how much humor there was in Mandy. Honestly, I needed a quiet screening to happen first because I wouldn't have appreciated the overnight fandom at all.

Panos Cosmatos of Beyond the Black Rainbow fame (or infamy) comes off the top rope with Mandy. Half art house visual feast and half Nicholas Cage in the front seat of a rollercoaster of gore, Mandy turns the argument of Movie fun vs Art house film into Fun House Art... 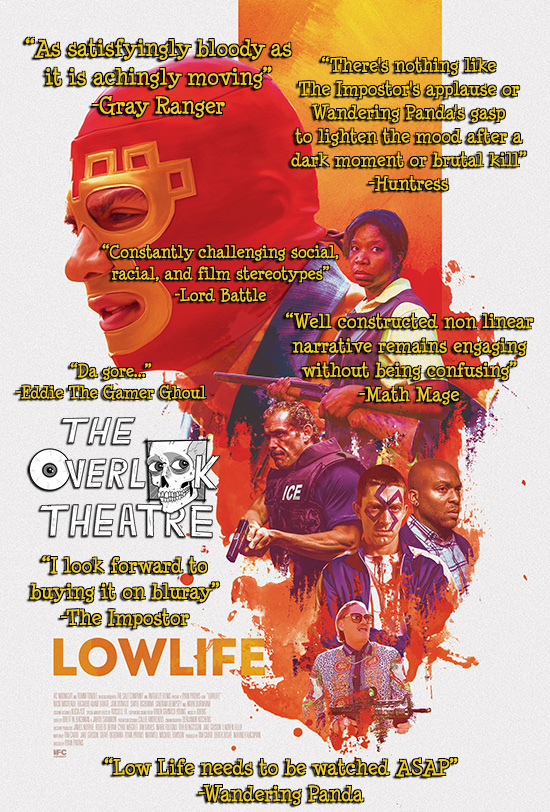 Ryan Prows' Low Life is the first ever film screened at the Overlook Theatre (which is a garage) with a member of the film crew present. This of course was exciting and incredibly nerve-wracking as none of us had seen the film prior and were all undoubtedly in fear of the film being terrible and the social situation that was bound to follow...

Thankfully Low Life was exactly what we look for, an unsung shinning example of genre film, exemplary in every category of what makes a film rated-R and filled with characters you'll hate, love, and hopefully understand. I personally loved Low Life and stress that you need to pay attention to Ryan Prows' future film career. It's going to be bright. 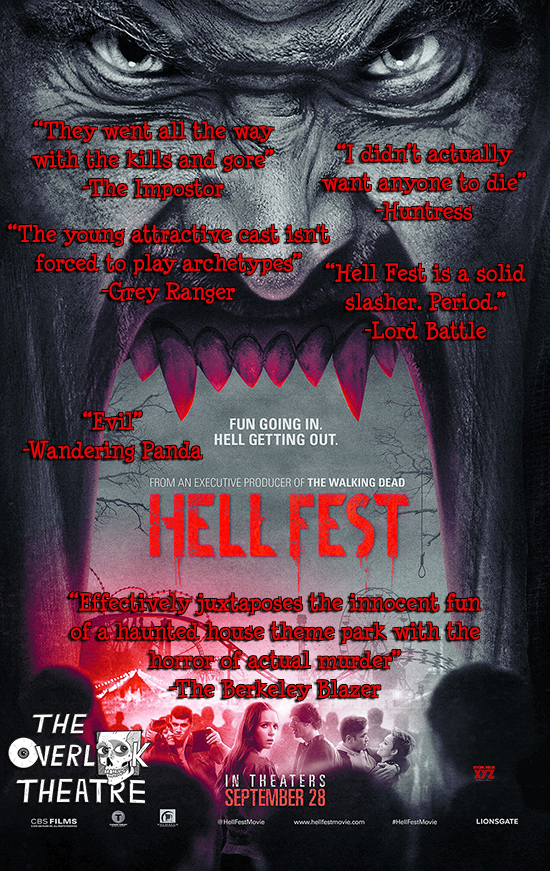 2018 was a return to slasher roots with major releases like The Strangers: Prey at Night budgeted at 5Mill earning 30Mill & Halloween (2018) with a budget of 10M earning 253M. And then there is our number 5 pick, beating Low Life by just 3 points comes what I would call the underdog of 2018 slashers, Hell Fest. 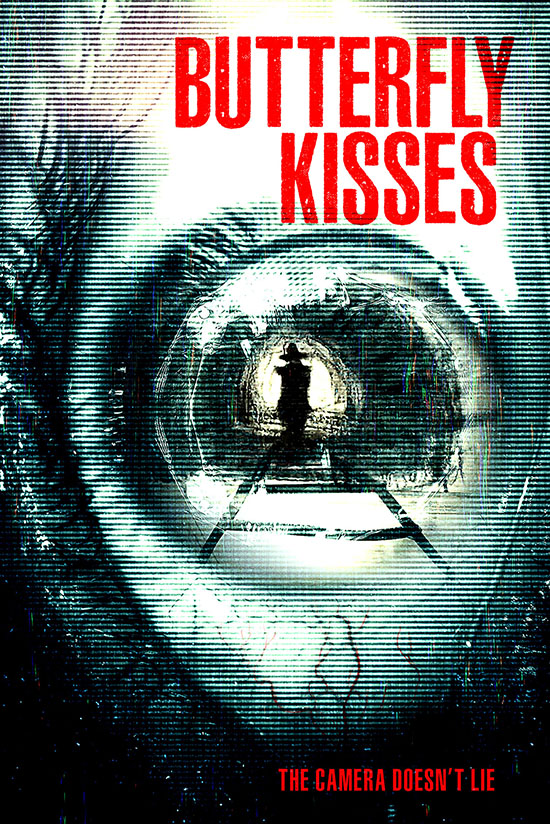 Found Footage Horror has stigmatized audiences ever since people were fooled by The Blair Witch Project in 1999. Actually, fooled isn't the best way to put it. Fooled implies the film had malicious intent and was going to point and laugh at you when you found out it wasn't actually footage of three missing people going mad...

Butterfly Kisses is a faux documentary centered on found footage. Or is it? It actually gets a little confusing at times since the film takes possibly the hardest look at Found Footage Horror in the form of... itself? This is a brilliant example of an evolution of indie film in a world saturated by video media and a studio system with no middle ground. If none of this makes sense to you, just know this: when we screened Butterfly Kisses at the Unnamed Footage Festival (2018) it won the audience award by a landslide. When I asked people why this film worked for them 9 of 10 people answered: "There was a point where I couldn't tell if what I was watching was real or not". I've since learned that no matter what the subject, genre, run time, or medium, that is all people want from found footage horror and Butterfly Kisses delivers this blurred reality in spades. Blind buy this one and show your friends, you won't be disappointed! 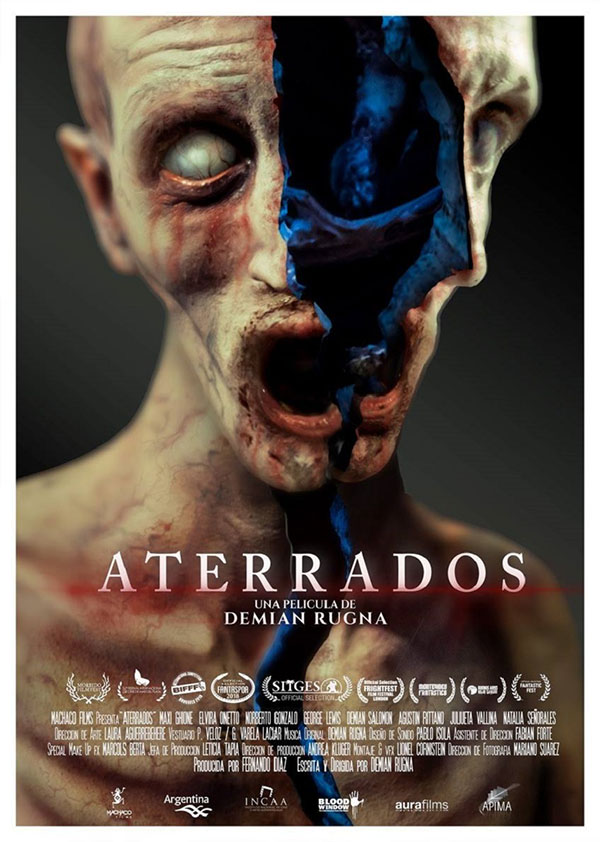 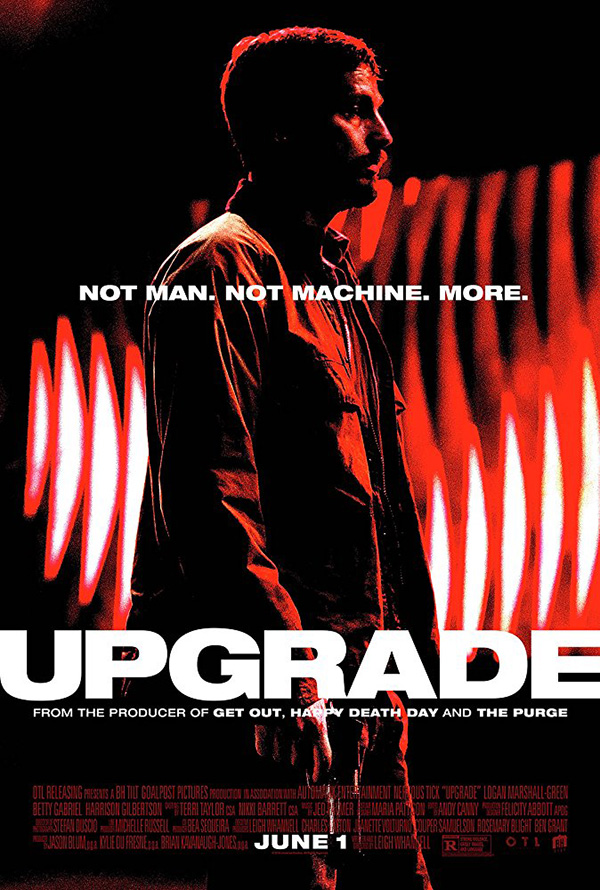 Argue whether Leigh Whannell's Upgrade belongs on a horror list all you want, just don't try to deny that this film was massively overlooked and terribly under-celebrated. Taking inspiration from rated-R sci-fi blockbusters like Terminator & RoboCop, Upgrade not only captured a near but far dystopian future but managed to infuse it with combat choreography that felt unique and exhilarating to watch. Upgrade is a Marvel movie without marketing. Do Mr. Whannell and your friends a favor and spread the good word. 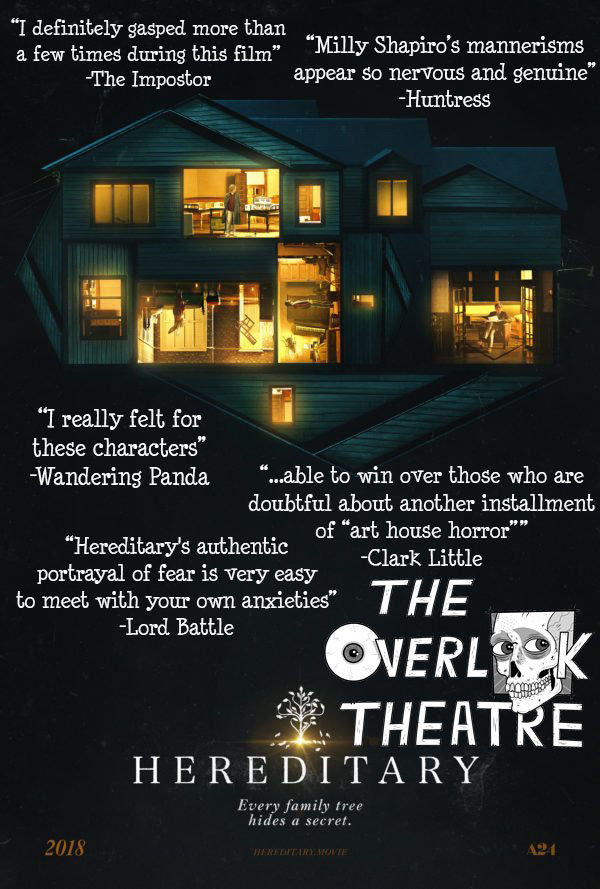 Hereditary is one of those films that makes such an impact on its first round of audiences that the second wave usually reacts poorly. Hereditary is our #1 film of 2018 decided by a vote that went surprisingly smooth and when I asked if people had rewatched it before voting I was answered with a resounding "No". It was a strange thing to experience as the film had seemed to make a mark strong enough to demand recognition without many memories of enjoyment. Hereditary played as a sort of trauma piece reminding people not only how ugly death is, but how irrationally we react when confronted with it.

Greyranger (in order viewed)
*. The Commuter
*. Ama-san
*. How to Talk to Girls at Parties
*. Zama
*. A Beautiful Sun Inside (aka Let the Sunshine In)
*. First Reformed
*. Milford Graves Full Mantis
*. Blackkklansman
*. The Other Side of the Wind
*. The House That Jack Built