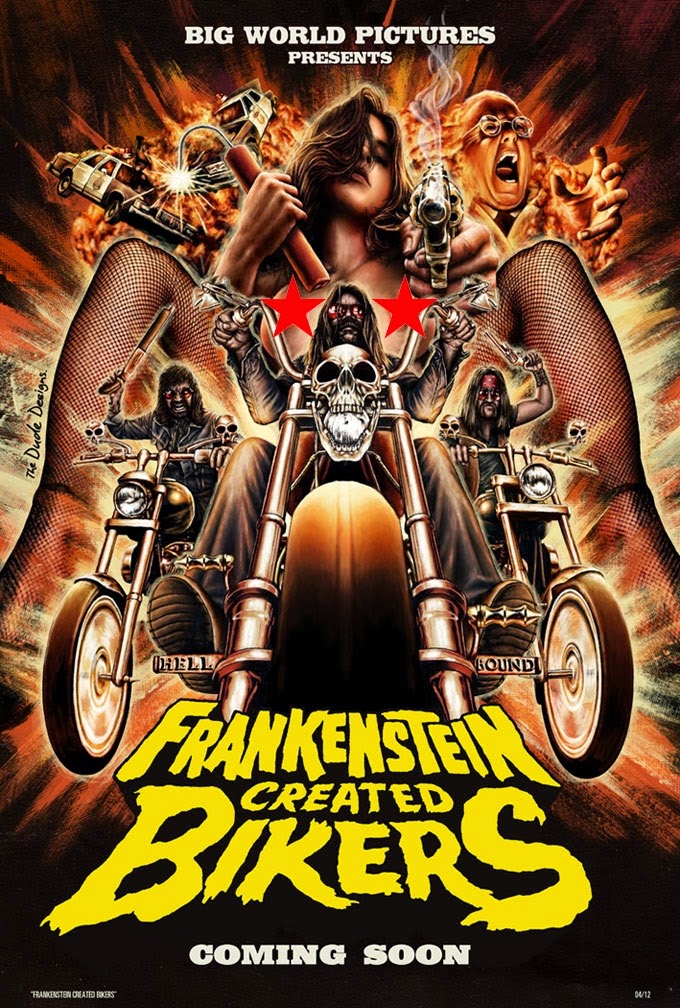 I have another cool project to share: Frankenstein Created Bikers. This is a sequel to the previously crowd funded film Dear God No, but can still be appreciated as its own movie. In case anyone is interested, it is available on Amazon on DVD or as a streaming rental. Dear God No is a "70's drive-in throwback exploitation / action / horror hybrid" about a gang of outlaw bikers who attempt a home invasion and are blindsided by the secret hiding inside.
With the sequel, the film makers didn't want to give up any control or blood, so they're staying away from any big studios and asking the fans to help them create a movie with only the audience in mind. This campaign is only for a portion of the cost of the film and will go towards funding the action filled parts of the movie. Dear God No had all practical, no computer generated effects, which is an amazing labor of love. I'm not sure how the sequel will be handled, but from the sound of things, I'm expecting gallons of blood. In this new movie, a mad scientist re-animates a notorious biker gang from the South, in order to hire them to capture a Bigfoot carrying a pathogen that will allow him to perform a human head transplant. And that's just the beginning.

In order to hang on to the drive-in, grind house feeling that the first film had, Frankenstein Created Bikers will be filmed on the rapidly vanishing 35mm film. This is another intensive labor of love and all the more reason to help this project out; film won't be around forever and the number of people who want to work with it seems to be shrinking.

There are some big names already attached to Frankenstein Created Bikers, even if you don't necessarily know their actual names. Here are a couple of the big ones:

Lawrence T. Harvey
Tristian Risk
Ellie Church
There's just under 2 weeks left to contribute to this Kickstarter and there are a lot of different reward packages to pick from. This campaign has a good idea I haven't seen from any others, they have several different rewards each for the same price. And if you spend more than $20, you'll be able to see the what happens if any of the stretch goals are met. Here are some of the highlights I found within the perks:

Affordable
Now the fun ones!
Under $100
Breaking the Piggy Bank
There are so many other packages you can get, but you'll have to check out the campaign page to see the rest. Here's my vote for most
Unrealistic but Interesting
At the time I'm posting this, the minimum goal has been met for the campaign, so the risk of it not getting funded is no longer there. Hopefully you'll at least check out the Kickstarter page and read up on the details and the rest of the perks. This sounds like a very cool project with a lot of homage being paid. Grindhouse fans will be drooling. Drooling!