Digging Up the Marrow, A Love Letter to Monsters 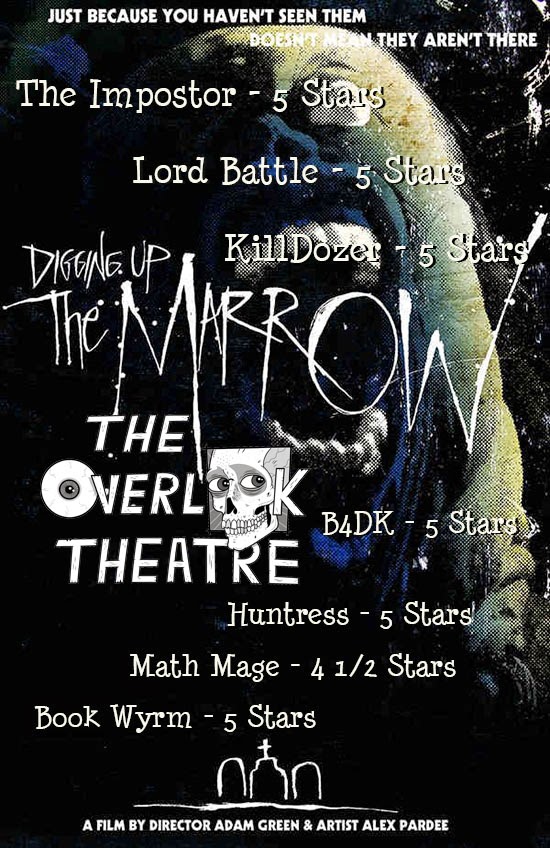 Book Wyrm - "I honestly had no expectations for this film, I didn't even know we would be watching a movie at this event (Touring through the Marrow). This movie is both entertaining and scary, I would watch this again and again. The art, by Alex Pardee, was amazing and totally enhanced the already great film. I didn't know who Ray Wise was so I thought they either got a great actor or this was sorta real. The movie had jump scares but they were fun. The effects were great, the people were great, the art was great, Adam Green was great, this film is GREAT!!!" - 5 Stars

KillDozer - "Being a true skeptic of the "found footage" approach to film making I cringed when I heard that Adam Green would be presented in this way. After seeing "Frozen" (not Disney) I eagerly awaited the next Green film not associated with the Hatchet franchise in hopes that he would continue bringing the horror community top notch intelligent scares, gore, and humor. I can honestly say he did not disappoint in anyway. With the artistic stylings of Alex Pardee thrown in the mix, the expectations were extremely high and were still surpassed. Viewing the film at a special screening in Berkeley with a sold out excited crowd of monster kids was like sitting in a living room with your best friends in grade school seeing Friday the 13th for the first time (in nostalgia only, not narrative). I can't imagine seeing it without quality speakers or a good projector. I hope this duo continues their collaborations going because this monster kid dove head first into the Marrow and came out with a smile!" - 5 Stars (Must own a copy and share with friends!)

Huntress - "This movie was better than I could have imagined. Not only were the story and acting amazing but it was actually scary too. The creatures were one of a kind and they were very obviously loved by the makers of this film; each one was built, tested, and retested so that their time onscreen looked as realistic as possible. Two independent minds synced up to create this art-film movement and they melded the two worlds perfectly. Alex Pardee's creations transferred to cinema incredibly well, and all the care to making them move naturally really made them come to life. And the atmosphere in the theatre, people's reactions and palpable support for the film, made it a big event movie. This film started out as a very selfish thing (not in a negative way); it was going to be Adam Green and company making the movie they wanted to make, which sounds awesome, but the more heart people put into finishing the project, the less ownership its loving director had. This became everybody's baby, so much so that Adam Green couldn't take out certain parts of the film that became too painful to watch after life threw some curves at him. The whole film, exactly the way it was, meant too much to everybody. Still, you can tell that this is a very personal movie from Adam Green and a lot of it feels like the closest thing to hanging out with Adam Green in real life, maybe second to the Movie Crypt." - 5 Stars

B4DK - "If you're looking for something different, then you seriously need to check this out. This movie will be stuck in your head for awhile. Such an awesome OG idea for a movie, pure awesomeness." - 5 Stars

Math Mage - "I love documentaries and I hate found footage. I feared this film would be too much of the latter and not enough of the former but the mix was perfect. "Night Breed" comparisons are inevitable but the Midians were cool guys you'd like to meet; Marrowers are inscrutable alien monsters that I want no part of, they're also the mafia apparently "It's inconvenient for us to kill you but we will if you don't stop."." - 4 1/2 Stars

The Impostor - "In my opinion, this is Adam Green's best film, I loved everything about it from beginning to end. The film brings Alex Pardee's amazing art to life and makes you want to believe monsters exist. "Digging Up the Marrow" is a tense, funny, creepy and genuinely enjoyable film. Seeing this on the first stop of Adam and Alex's Touring Through the Marrow made the experience even better." - 5 Stars

Lord Battle - "This film is the product of people with whom I deeply relate. There is something about enjoying horror in an almost obsessive way, loving practical effects, and resisting adulthood that Adam Green has become king of, not because he's the biggest nerd but simply because he's a driven talented monster kid who expresses what people like us feel but could never explain... till now. Also Ray Wise appearing in this film elevates "Digging Up the Marrow" from a classic to a masterpiece. I have my fingers crossed for much more from the Marrow." - 5 Stars


Be warned, even though this is the official trailer shared by Ariescope it still contains spoilers. Adam Green went to great lenghts to keep this film a surprise, so there must be a good reason for it...

The Overlook Theatre took a field-trip on February 12th to catch the Touring Through the Marrow event. I had been a broken record since the inception of this tour. I knew who Alex Pardee was before I had learned of his collaboration with Adam Green, but once I heard Adam wanted to take his movie on a theater tour I began telling people to get ready. I of course was assuming they'd have to come through San Fransico simply because I was aware how popular Alex is in the Bay Area. Long story short, I became frustrated repeating over and over dates, times, and location to a ton of people who flaked last minute. I mean I already harass everyone who reviews!
(The Tour was amazing and if you haven't already read about it, do so now!)
The reason I bring up the fact it was a field-trip, is simply because the theater had an excited energy running through it, which totally affects reviews. With that said, Math Mage and Book Wyrm are not the type to be swayed and honestly were the two I was most worried would have a bad time (read what they had to say above).
*Spoilers*
(for those of you that don't know how this works)
Holy fuck did the crowd jump/scream at the sight of the first monster. I had pleaded with people to avoid the trailer and just take my word that the film would at least be fun but I didn't prepare anyone to be scared! The other thing I didn't prepare anyone for was how smart this film would be and how many of the subplots wouldn't be answered but left to the audiences imagination. The Bart (Bay Area Rapid Transit) ride home that night was filled with different theories about the film and comments on how awesome Alex and Adam were in person. Also both signed 11x17 Digging Up the Marrow movie posters that were free, this is above and beyond what most people are willing to do now-a-days, yet it's exactly what they should be doing! I successfully dragged out a number of non horror fans, who after all was said and done walked out with two autographs and a movie poster! A signed poster for me is something I'll cherish forever, but also something I have a ton of, but for the people new to Adam and Alex they now have a memory and a poster that they'll never forget about, there is no better marketing. But back to theories...
I remember that on the way home I had decided that Dekker himself was from the Marrow. This was based on the fact that the security guard didn't address him and that his neighbors never saw him. I can't even for sure back up those facts since I haven't seen the film since Berkeley. I then concluded that he was exiled from the Marrow because he actually had killed that person found in the river, not Brella. Now the part of this theory I still stand by firmly is that you have to want to see the Marrowers, (as Math Mage put them) in order to, this would explain why Dekker sought out only horror directors. This would also explain why the horror directors (Adam, Tom Holland, Mick Garris) and film makers (Kane Hodder, Will Barrat, Josh Eithier) are the only people who actually have SEEN Dekker, unlike the police back on the East Coast or the neighbors etc..
I wish I had my bluray copy already, I would have done some fact checking and been more professional... Oh-well!
Lastly, I just want to acknowledge how much people enjoyed seeing real fucking monsters again! And by real, I mean practical effects. Adam had mentioned how the monsters became very costly on a low budget endeavor and my response (and I speak for everyone) is, we appreciate it! Seeing CGI is always at best a little jarring, and when the film is a love letter to monster movies, there really isn't anything us monster kids would have expected besides REAL monsters. This movie earned its score.
- Lord Battle

*Based on the star ratings turned in by character reviewers, others viewed and got to "Dislike" or "Like" but that does not effect the rating.
Posted by Lord Battle at 8:47 AM