Traces of Bughuul in 1349 *Spoiler Alert! Do not read until after viewing "Sinister"*

My favorite genre of music would have to be metal, hands down (If my freaked out early morning post didn't give that away already). Now if you know anything about metal you'd know it contains various subgenres (instead of breaking them down I'll refer you to Sam Dunn's work) a couple of my favorites being, Heavy Metal and Glam (hair metal). I really love metal as a whole but the two subcategory's I mentioned are important because they often mix with another of my loves, Horror movies. There are so many examples of this I'm to scared to write a list, for I'm afraid to leave a classic example out and embarrass myself.

I consider this one of the coolest moments in pop-culture history. 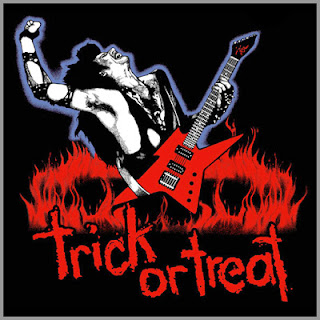 This is a shirt design from Fright Rags.
(If you removed my Fright Rag shirts and my band T's from my dresser I'd have no clothes at all) 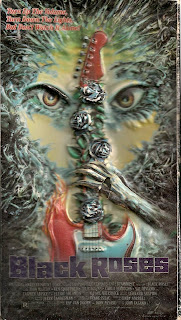 This is a picture of the 3-D cover of the "Black Roses" VHS.
A young me was mesmerized me it.

I couldn't resist sharing some cool art from a couple of my favorite Horror/Metal collaborations, plus they help prove a point I'm about to make. Point being that at the time Hollywood used bands like Dokken and Thin Lizzy because they were popular and could further market value. Glam (I'm using "Glam" although I think "Hair Metal" is more accurate, thats a different post altogether though) dominated the horror scene and not just in American. Canada had Jon Mikl Thor's movie "Rock and Roll Nightmare" aka "The Edge of Hell", Italy had "Monster Dog" etc... This post isn't about all the Glam bands/stars in horror, its about Black metal sneaking into a new hit.
Three days ago I viewed "Sinister" (If you haven't yet stop here) now just to get it out of the way I loved the film. First I have to say it totally reminded me of Cannibal Holocaust in the way they are both arguably horror movies about found footage films. But what made me want to research it and post about it was Bughuul. First thing that came to my mind when I saw Bughuul was Ravn, who is of course the front man for the Black metal band 1349. Soo they look alike...
Not really that impressive of an observation I realize this... 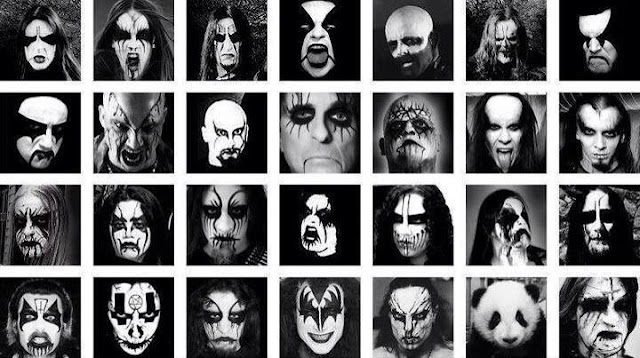 In fact some others even seem to match a bit better, still Bughuuls image is what the movie is about and whats important. So in my fantasy version of the film Bughuul (which is really Ravn) is preparing the next plague to hit mankind (1349 is named after the year the Black Death hit Norway) but in classic Metal form his fans (the children) would be spared and made immortal in exchange for they're undying loyalty. To bad  Fearnet did an interview with Scott Derrickson who directed and co-wrote "Sinister" since Mr. Derrickson went on to state that he researched black metal art to help design Bughuul's symbol and really didn't want Bughuul to feel to much to much like a Black Metal front man. Which I would say saddens me if it weren't for the fact that the he does and not only that but the whole movie felt like it had a little bit of some Norwegian black metal in it. And I think its pretty fair to say; if there isn't any Ravn in Bughuul there is differently some Bughuul in Ravn and I'm sure he'd agree.
Posted by Lord Battle at 10:07 PM