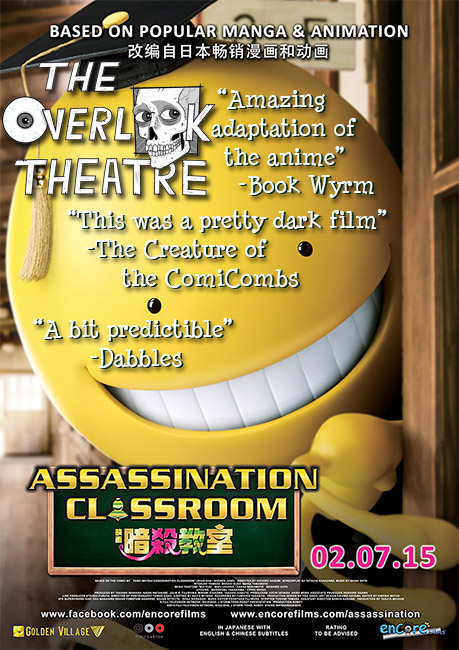 5 of 5 viewers "Liked" "Assassination Classroom" (Japan, 2015)
Here's what the creatures had to say:

Book Wyrm - "Amazing adaptation of the anime. The movie was funny, charming, and even dark; it continually kept me interested and left me wanting to see what would happen next. Even if you don't know anything about the anime it came from, this movie is still worth a watch." - 5 Stars

The Creature of the ComiCombs - "I was caught off guard by how terrible of a situation I was seeing unfold and how it was approached with so much comedy. This was a pretty dark film and I have to say I enjoyed the comedy. It elevated the horror for me because there was always that knowledge of the impending doom that everyone was faced with should they fail their mission. There are a lot of awesome scenes here if you can get passed the use of CGI. Not a perfect movie but one that had me wanting more when it was over." - 4 Stars

Dabbles - "I have never heard of this anime/manga, but was interested in it because of the synopsis. It turned out to be the best representation of a live action adaptation of anime. The anime style acting wasn't overly done but done enough to feel wholesome and fun. Nothing but good feels with this film. A bit predictable, but in a good way. I'm now interested in actually watching this anime." - 4 Stars

Lord Battle - "Assassination Classroom is exactly what non-anime fans imagine Japanese animation to be. With an outlandish plot, a crazy CGI star, and a very on-the-nose heartwarming narrative that conjurers up memories of Stand And Deliver. Assassination Classroom however breaks all anime-to-feature stereotypes, by being damn good." - 4.5 Stars

Huntress - "I knew next to nothing about Assassination Classroom, but being one of the four Dark Wave films in the San Francisco International Film Fest was enough for me to want to give it a try. And I'm glad I did, especially in that environment. The story was admittedly crazy, but not hard to get into, even if you don't watch anime regularly. By the end of the movie, it felt like the whole audience had taken on the trademark laugh of the alien teacher. It was great!" - 4.5 Stars

(I couldn't find an English trailer but don't worry, a lack of context won't take away from this film.)

I was very pleasantly surprised with this movie. Going into it, I was not expecting much because it was a live action adaptation of a fairly famous anime and my experiences with those have not been so great. The last live action anime adaption I saw was the Attack on Titan movies and if you cared enough to see those then you probably know why my expectations were so low afterwards. This movie pretty much blew me away. Before going into the film I had seen about five episodes of the anime and had a general idea of what the plot was going to be, but other than that I didn’t really know much else about the series. Basically,  what I knew was that this extremely fast alien blew up the moon and then declared that he was going to destroy the earth in a year or so unless he was assassinated. He then says that he will be teaching a class of high school failures and they will be trained as assassins and will be the only ones allowed to kill him. Craziness ensues, he actually turns out to be an amazing teacher, and the kids begin to grow more confident in themselves and also start to love their new teacher, despite him being their assassination target. The movie managed to encompass all that I had seen in those five episodes pretty thoroughly and even more, while managing to not feel overly long. It kept the audience interested in the drama and comedy that was ensuing.

What I really enjoyed and thought the crew did a great job with was the set and costume design. The set stayed true to the source material with the students’ classroom shed looking just as shoddy as it does in the manga and even having the main campus look as nice. The costumes were also done extremely well and let you know who the characters were supposed to be even without the help of their crazy hairstyles and haircolors. And of course you can’t talk about this movie without talking about the CG’d Koro Sensei who was voiced by his same voice actor from the anime. I thought the CG animation looked amazing! There were times when you could see the sunlight beating down upon his head. He looked authentic and real and even if there were times where it looked a bit strange it didn’t bother me. Apparently they even used some physical props for his arms and body. Even with all of his crazy form changes and high speed reactions, Koro Sensei managed to feel and look scarily real even though he was essentially ripped out of an anime.

All in all, the Assassination Classroom live action adaptation did not disappoint; it was dark yet charming, kept you feeling enraptured in the story, was fun to look at, had very good acting, and kept true to the source material. It made even the craziest of situations believable, making for a great stand-alone movie for fans of the anime and regular movie lovers alike. If you have the chance to see it in a theater I highly recommend it! 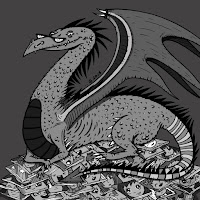 The Overlook Theatre materialized on 4/27/2016  at  the AlamoDraftHouseSF.
This screening was a part of the SFIFF Dark Wave programming.
*Based on the star ratings turned in by character reviewers, others viewed and got to "Dislike" or "Like" but that does not effect the rating.
Posted by Lord Battle at 9:45 AM