The Pyramid, or Not Alexandre Aja's, Not Found-Footage-Film 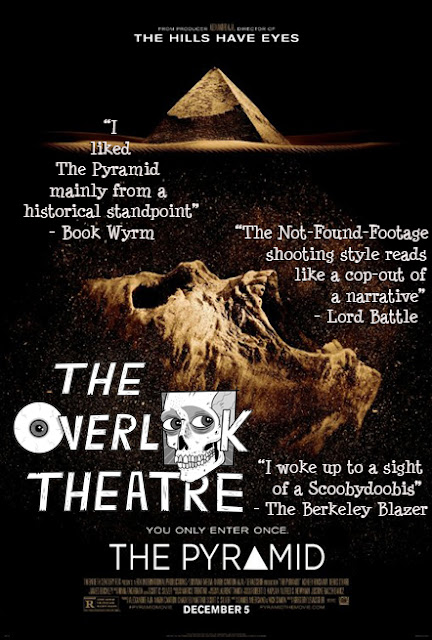 Book Wyrm - "I liked The Pyramid mainly from a historical standpoint. I enjoy things having to do with ancient Egyptian culture + lore and that's what I found to be the coolest aspect of the film. They put so much time and effort into the amazingly intricate detail of the pyramids hieroglyphics that it's crazy to think about. Story wise I didn't really like the characters + the monster reveal was okay, but I wish the ending was more satisfying." - 3 Stars

Lord Battle - "The CGI was laughable, which is aggravating since they had amazing practical effects for the same creatures. The Not-Found-Footage shooting style reads like a confusing cop-out of a narrative, honing all the bad elements of found footage while reading like the filmmakers felt above the shooting technique. On a brighter note, The Pyramid had a ton of story potential, which is too bad because as it stands I wouldn't watch it again or recommend it to anyone." - 2 Stars

The Berkeley Blazer - "I found the beginning very promising and was actually a little excited when the motley band ventured into the pyramid. At some point in the tunnels I decided to follow suit with some of the smarter adventurers and lost consciousness. When I woke up to the sight of Ascoobydoobis I asked where I was and called for an adult. This movie was a confusing and sleepy experience." - Fell Asleep - Default 2 Stars

Huntress - "The Pyramid was very tepid experience, not trying too hard to stand out but still not a complete waste of time. It was not obvious from the film itself, but a lot of love and attention to detail went into the production; the labyrinth-like walls in the pyramid were each covered with imitation hieroglyphics and assembled when the material dried. So, while the set looked great on screen, it could only make up for so much of what was lacking in the actual story." -2.5 Stars

KillDozer - "I have lost all faith in the "produced by" credit. Honestly don't attach your name to anything that you think might tarnish the horror kid's opinion of you. With that being said it honestly could have been worse. The film starts out with some fun and entertaining Egyptian lore at an archaeological dig Indiana Jones style. We are quickly introduced to our characters, "the protective father" and of course "the comic relief". Still the film is entertaining and interesting enough to continue on, then everything you think will happen... happens! Extremely obvious writing, really bad CG (Totally forgivable with a good plot), and poorly developed characters make this movie feel long and even worse, boring about half way through. After you stop caring what happens everything becomes a blur. I gave my copy away the next day. Like I said, beware the "produced by" selling point, IT'S A TRAP!" - 2 Stars (Watchable)

(This is a long spoiler heavy trailer. You've been warned...)

The Overlook Theatre is home to many opinions, some informed, some purely emotional, and some that are completely unique to the individual. I tend to think this is the beauty of the theater format and any film that inspires good conversation has achieved on some level. The Pyramid has inspired many conversations, they usually start with "What didn't you like about it?", but none-the-less it got us talking.
Let me address the elephant in the room by saying Alexandre Aja did not direct this film, in fact I question how much he contributed at all. Well I guess Aja did do a lot for the film, seeing as most of the horrors here at the Overlook only watched it because his name was attached and this did greatly help out his screen writing collaborator Gregory Levasseur (High Tension, P2, Maniac, The Hills Have Eyes, etc...) who directed (but didn't write) The Pyramid.

Alexandre Aja talks about The Pyramid

Each and every creepy crawly of the Overlook seemed to have 1 or 2 major issues with the film but otherwise liked it. The problem I had with the film relates to the not-found-footage style it was shot in. Films that flip flop in tone (The Texas Chainsaw 2013), subject matter (Tusk 2014), or presentation instantly lose me. The Pyramid was particularly annoying because it emerged in a time when hate was regularly being showered on found footage and you can feel how they tip toe around the medium, even though this film would've benefited from the shooting style. I'll have to paraphrase Adam Green and say found footage doesn't suck, the plot behind the film just needs to call for the medium. If you're cramming a regular story into the found footage medium it's usually just to save money and it's always at the expense of the film. The Pyramid on the other hand is a film that perfectly justifies the use of handheld cameras, head mounted cameras, and a weird NASA land rover. Geologists trying to maximize borrowed time to illegally document whatever they can, sounds like an awesome film! Then you locate it in a pyramid full of traps and an ancient cult? Someone needs to remake this film already. 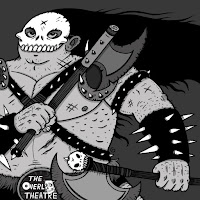 *Based on the star ratings turned in by character reviewers, others viewed and got to "Dislike" or "Like" but that does not effect the rating.
Posted by Lord Battle at 2:34 AM