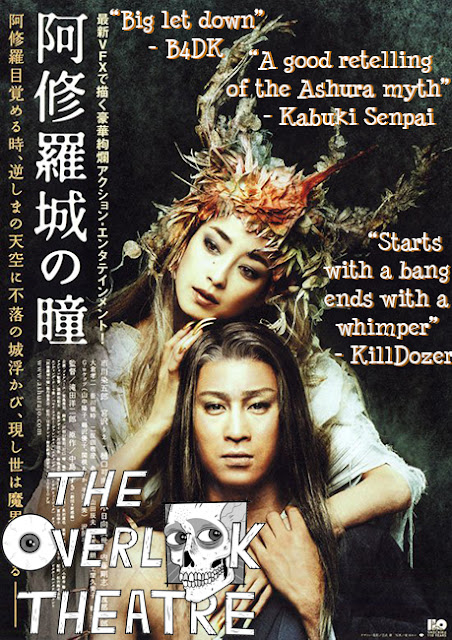 B4DK - "About six or seven minutes into this movie I was so stoked. The fighting and action sequences were so bad ass. It was like watching a live action anime... Then that was that. Expecting more to just be thrown into a really boring story. Movie was way to long and dragged on and on till the end where it finally picks up. Definitely one not to remember. Sad because I really wanted to like it. Big let down." - 2 Stars

Kapuki Senpai - "A good retelling of the Ashura myth." - 3 Stars

KillDozer - "'Starts with a bang ends with a whimper' as the old saying goes. This visually epic Japanese love story pulls the audience in with promises of demon battles and hell fire falling from the sky. Sadly these are over and done with in the blink of an eye. Obviously not everything is easily translated from the play this film is based on. Subplots pop up and distract more than the bad special effects. This film could have worked as a love story or epic battle between good and evil but throwing both in the mix was confusing to say the least. Other film makers are able to pull it off unfortunately Yojiro Takita was not." - 2 Stars (Not collection worthy)

Huntress - "The first 20 minutes of Ashura had all the elements of an awesome fantasy movie, but somewhere along the line the genre changed and the energy level of the story dropped. It got kinda hard for me to follow, maybe because I'm not used to how convoluted Asian cinema story-lines can get." - 2.5 Stars

Lord Battle - "This is one of those films you used to blind-buy in Japan town, rush home to watch, and come out bored and upset you paid so much. This film is by no-means horrible, in fact I really enjoyed a couple characters and a lot of the choreography. The problem with Ashura lies in the pace. Opening with 15 minutes of Versus-style sword play, then switching to a 2 hour rom-com centered around a kabuki actor, and then to a 15 minute finale in a floating castle filled with orcs... And even then this could be cool, yet it feels like a million other films from assorted Asian cinema." - 3 Stars

Ashura opens up like Blade or Underworld with a team that raids a small town filled with demons feasting on the unknowing villagers. It reminded me of another movie directed by Yûji Shimomura called Death Trance, with more action. It deals with a young girl who has an anti hero protecting her; she eventually dies and morphs into a grown woman goddess that the anti hero now has to kill. The legend of Ashura comes from a Buddhist myth which is in the same vein as the Greek version of god vs demi gods. This theme comes up a lot in movies and video games.
The cgi in Ashura looks like the norm for a 2005 movie, which means it isn't bad but also is not the best. The practical effects, such as the demon's green glowing blood and tapetum lucidum (night time reflective eyes), were more impressive. The filmmakers managed to keep these glowing whenever they needed to be, even in lighted scenes, which meant that they had a massive UV light on set, alongside normal lighting equipment. And reflective eyes are tough to pull off when they need to glow as in The Howling, the Pitchblack series, and This is the End. To get this effect just right, that actor must wear specific contacts and be lighted from the right angle.
The movie also has some really beautiful settings, especially the ones that are littered with cherry blossom petals. The village in which this was filmed in looked like Edo Wonderland Nikko Edomura in Tochigi, which made it look authentic, but it also made me think of the festival scene in Afro Samurai. The switch in the middle of the movie threw me off but it was still a good retelling of the Ashura myth. 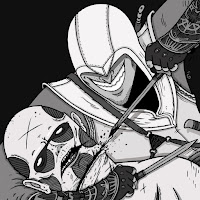 *Based on the star ratings turned in by character reviewers, others viewed and got to "Dislike" or "Like" but that does not effect the rating.
Posted by Oksana O. at 2:20 PM