The Overlook Theatre Reviews: Ruin Me 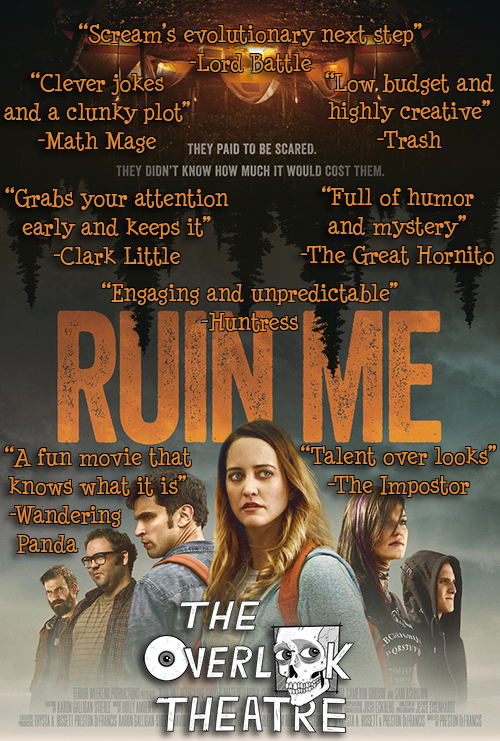 Lord Battle - "If Scream's underline achievement was granting the horror community a voice while also deconstructing one of its most prolific subgenres, Ruin Me also deservers recognition for being the evolutionary next step in this chain of thought. Showing how the Netflix & Chill generation seeks its horror movie experience not in a theatre but in a haunt, escape room, or scary sleep over and how the quest for escapism may develop a dangerous skepticism. What I mean when I say a "dangerous skepticism" is that horror fans used to the idea of "the ride breaking down" may end up walking through a haunt of actual corpses only to comment how fake it looked." - 4 Stars

Math Mage - "A surprisingly predictable 'haunted house is actually haunted!' tale. Carried by clever jokes and interesting characters, but weighed down by a clunky plot and boring twist." - 3 Stars

Trash - "Low budget and highly creative, Ruin Me starts as one movie and turns into something more sinister and complex. The creators coming from a theater background makes sense, as there's a lot of weight put on the performances and intricate construction of this movie. Set in an extreme haunted experience called Slasher Sleepout, in which players buy a ticket to spend a night in the woods solving puzzles and being tormented by haunted house actors. Themes of manipulation and questioning reality are layered into the plot, as the event grows out of control, and you start to learn more about the lead character, Alex. This movie thrilled me. I love immersive horror, and I love when reality breaks. Watching it with a big audience definitely enhances the experience as well! Catch it at a film festival if you can, it's playing a bunch!" - 4.5 Stars

Clark Little - "A fun, smart dissection of the slasher genre. With a pair of charismatic leads, Ruin Me grabs your attention early and keeps it." - 3.5 Stars

The Great Hornito - "Ruin Me is a slasher movie that is full of humor and mystery. The characters were well written and brought with a talented unknown cast that had amazing chemistry. Ruin Me was also well paced, funny, and featured some interesting kills. The ending was the only thing that "ruined me"." - 3.5 Stars

Huntress - "We all secretly love watching other people do things that we would never take on ourselves. And being that I’m too much of a wimp to ever venture into an immersive haunt, watching someone else do it was bound to be fun. And Ruin Me definitely started out fun, as we were introduced to the band of clashing personalities that must work together in order to win this escape room type game. But the adventure quickly takes a surreal turn and we’re left questioning what's real and what's part of the game. The story is told from the reluctant girlfriend, Alexandra (Marcienne Dwyer) perspective, which effectively puts us in her shoes and makes us question everyone else in the party. I feel like I went into Ruin Me a bit naïve, kind of like Alexandra and as the film continued I was equally as confused. This is as close as I’ll ever need to get to an extreme haunt, but it was so engaging and unpredictable that I'm not missing out on anything." - 4.5 Stars

Wandering Panda - "A fun movie that knows what it is. It makes fun of some horror tropes which I like. It's meant to not be taken too seriously and that's one of its best qualities. The cast is cool and believable. The funny fat horror nerd is by far my favorite. His quick one-liners and well timed jokes made me love him. The story is ehh... but not so bad that I got bored." - 3 Stars

The Impostor - "Ruin Me is a refreshing surprise of a film for me. While the slasher sub genre of horror is by far my favorite, there haven't been many that excited me. Ruin Me has the perfect setup for an all out bloodbath in middle of woods with little to no resources. Characters were fun and I was actually rooting for a few of them, which is rare. I tend to want many to die right off the bat. Acting is top notch, I feel they went with talent over looks which isn't a bad thing at all. The film felt more real and authentic that way. The main character got put through the ringer and even made me wonder if this was all real. Is she crazy? I don't know. I'd highly recommend everyone check this out, it will definitely surprise you and keep you guessing from beginning to end. This will be in my top 10 of 2017 hands down." -  4.5 Stars

Much of the reason I was first drawn to Ruin Me is an odd one, and a modern invention in the world of haunted attractions: my obsession with extreme haunted houses. These aren’t your typical haunt, where you walk through while actors pop up and startle you, but a new breed of immersive theater in which you sign a waiver, get a safe word, and are thrown into a sort of false reality in which a living horror movie plays out and you’re the star. Ruin Me’s main character is a woman named Alex who isn’t a horror fan, and certainly would never sign up for an event like this. In fact, as we get to know her character, she divulges a much deeper side of her life that explains why she wouldn’t have chosen to participate -- but she’s a devoted girlfriend, and she’s not going to abandon her boyfriend who has been looking forward to attending Slasher Sleepout for some time.

As you can imagine, the audience for these kind of events isn’t a huge one -- most people aren’t game to throw down $50 to simulate a traumatizing experience -- so there aren’t a ton of active extreme haunts. The most common ones are tamer, leaning in the direction of elevated escape rooms, asking a small group of players to solve puzzles to avoid being slain by a killer or bitten by a zombie on a chain increasing in length. Fun, but not the eye-opening personal experience a thrill seeking horror freak might have in mind.

To learn more about what I’ve done, check out my write up for the legendary New York haunt Dead Of Night for Fangoria… like being pinned against a wall while “worthless bitch” was written across my chest in black marker. 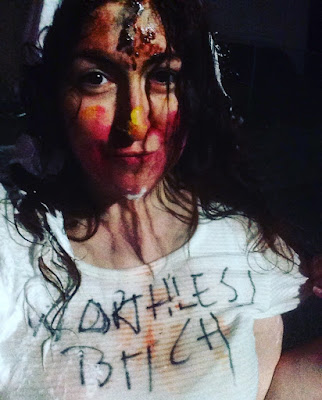 The be all end all in extreme haunts is a legendary establishment called McKamey Manor. Founded by Russ McKamey in San Diego, the stories floating around regarding this experience are so dreadful and strange, even I’m not certain I’d be willing to brave it. Being hit and forced to puke is one thing, but I hear they shave off your eyebrows? For me, that’s a HARD NO.

See, that’s the most exciting part about extreme haunts, the self-discovery. It’s a device which Ruin Me uses to flesh out a really fascinating character in Alex, is finding the answer to the question of how far are you willing to go? What skills do you hold that you’ve never had the chance to put to use, because you’ve never been in a scenario like this? What don’t you know about yourself, that an event like this may be able to reveal?

One of my favorite events I’ve attended is a haunt called Nyctophobia. Unlike the explicit sexual shocks of Blackout, or the gross-out splatter challenges of Dead of Night (now rebranded as Fringe Theater), Nyctophobia plays out more theatrically, planting small psychological seeds, disorienting you, and then reaching into your psyche to tug them out by the roots. In a particularly memorable scene from their 2013 show, my partner and I were sat down facing each other in a pitch black office, noise cancelling headphones strapped on our heads. A bright light was shone on us, and a man said he’d be asking a series of questions, his growling voice booming through the speakers. If the answer was yes, keep your eyes open. If the answer was no, close them. The questions began, prodding but benign, and we lined up every time. But then it got harder: Do you trust this person? Has this person ever hurt you? When my eyes stayed open and his closed, my anxiety spiked -- that’s not the kind of scare you expect from a haunted house.

Ruin Me is playing on November 6th at the Another Hole in the Head film festival in San Francisco, and I’ll be there, so if you want to watch this one in an awesome theater and then have beers at a weird underground lounge that plays 90's dance music afterwards, join me. I’m the one who looks like trash. The Overlook Theatre materialized at the Philadelphia Unnamed Film Festival for a screening on 10/1/2017
*Based on the star ratings turned in by character reviewers, others viewed and got to "Dislike" or "Like" but that does not affect the rating.
Posted by Lord Battle at 10:28 AM