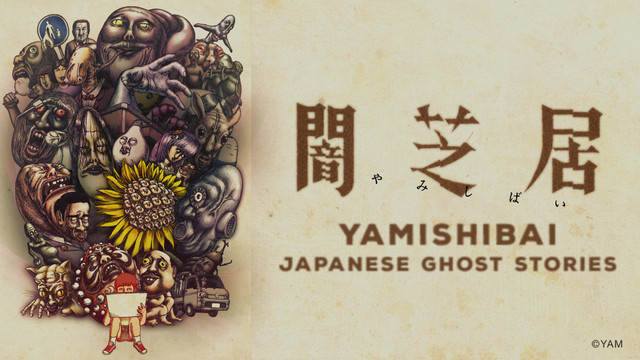 I finally watched something that made me jump! I came across this scrolling through Crunchyroll  and finally gave in and watched it one night at 3 AM. This anime has been going on for a while and has over fifty episodes, but they are all only about five minutes long so you could potentially finish an entire season in a little over an hour. Also the art style is super weird and unique, but I'll get to that later.

Yamishibai is an anthology anime kind of similar to what I reviewed last time, Fuan no Tane. Each episode is a new short story that has either been a Japanese urban legend or was a rumored event. Every story told is kind of unsettling in that because they were supposed to have happened in real life they make you feel as though the same thing could happen to you, or as if the same monster is watching you. This feeling is especially prevalent if you happen to binge watch this at three in the morning one night like I did. Some of the shorts feature jump scares, and even if you are anticipating them, it's hard for them not to get you.

As you probably noticed from the pictures, the art style in Yamishiba is not as traditionally anime as you may have guessed. The show is done in a sort of picture book animation where everything is hand drawn (I think, it might just look like that...) and there are no actual movements, but rather one standee moving from side to side. That was a horrible attempt at explanation so I'll try to link an example of it below lol. I thought this style of animation was really cool. I had never seen anything like it before and it kind of reminded me of The Marvelous Misadventures of Flapjack, while also making me recall picture books from my childhood.

I really enjoyed watching this anime despite being scared by it because it was something new and unexpected. There was also no need for commitment as each episode is standalone with no long plot line running through the series. So if you need to put it down you can. Some of the shorts do fall flat because the stories are kind of Japanese culture specific and aren't really enough to scare me, but most of them are super creepy and spooky. In the later seasons some episodes feature different art styles and a little more movement making me wonder if maybe they got some guest artists to do an episode or something which would actually be really cool if it were true. (Also a side note if you like Vocaloid, the first two seasons have some good Vocaloid songs for the OP/ED themes.) If you've got a tight schedule, but still want to check out a good horror anime Yamishibai is the one for you!