I'm back again this week having just finished the manga pictured above, Doubt. It was yet another suggestion from my sister and I am now starting to think that maybe she should be writing these posts instead of me lol. There is a difference between this post and my last few in that this week I had time to plan ahead and am feeling quite coherent so hopefully my thoughts come across not so scatterbrained this time! Doubt is a short manga about a group of people who were all playing the same online game, Rabbit Doubt, that decide to meet up in real life. The game consists of them assuming rabbit personas with a wolf hidden among them; the wolf then proceeds to kill off the rabbits and the game doesn't end until either the rabbits find out who the wolf is or the wolf kills all the rabbits. During their meet up they all head to karaoke and have a great time until someone goes to the bathroom is assaulted by someone wearing a rabbits mask. They all later awaken in a strange warehouse where they learn they are now playing the game in real life and must find out who the wolf among them is in order to escape. Here are my basic first thoughts on the manga after completing it. I enjoyed it, but I didn't think it was original and I thought it was kind of predictable as well. I have read and watched countless other things with story lines similar to Doubt and this really wasn't refreshing in any way. It was short, only twenty chapters long, so I really didn't have any investment in the characters and by the time they started to be killed off there was no reason to care because you can pretty much tell where the story is headed and who is going to come out of it intact. It has a really similar premise to Mirai Nikki (even including a surprise Yandere) and if you read my last post then you know why that might have been a turnoff for me. 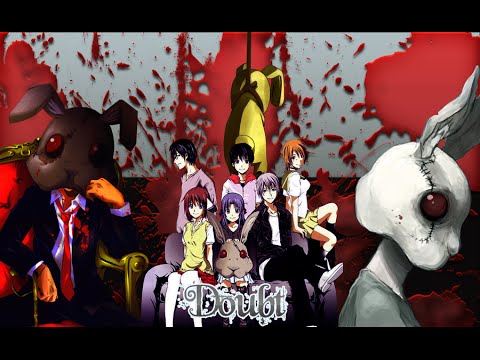 I can't really think of anything else to say about this because it was that lackluster. The deaths weren't too jarring and the continual usage of plot twists just really got old after the first two. In terms of suspense, I did want to know who the wolf was, but if I was reading this on my own and not to write about it, I don't think I would have felt compelled to finish it. I want to know what my sister found so enjoyable about this manga because in all honesty, there wasn't much that I felt was worth my time to even write about for this post. Check it out if you want to, but I would completely understand (and even agree) if you decide not to.