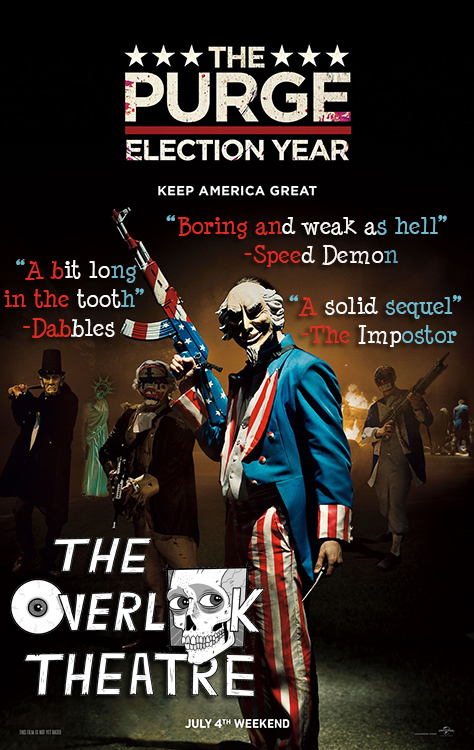 Speed Demon - "Disappointing. It's pretty obvious by the title we all know where this is headed going into the third installment of the Purge franchise. A candidate wants to end the purge and the other doesn't. The craziness from the first two is nowhere to be found in this one. It focuses too much on one group and there are no cool kills. Boring and weak as hell." - 2.5 Stars

Dabbles - "The Purge: Election Year is a really good suspense driven movie. Some of the characters are a bit cliché and some of the scenes are a bit long in the tooth but it does have a lot of spunk. My only gripe is that this movie didn't go further than I expected. But it did make a good impression on me with the main characters and structure of the story line. A lot of the events that take place aren't scary as in the sense of slasher-scary but in the sense of damn, if this were real life, that's really horrifying. No doubt though there are a lot of undertones you tell they were really pushing." - 3 Stars

The Impostor - "Started the Forth of July weekend off right with The Purge: Election Year, the third installment in The Purge series. I found this movie just as entertaining as its predecessors. Rooting for characters that I wanted to survive the night kept me on edge. Some not so likable characters kept me in suspense to see how and when they were gonna die. The pros  for me the creepy masked purgers and craziness in the streets, booby traps and murder tourists. I was hoping for more of these things but our characters were up against a lot in this film. The cons are definitely run-time in some parts that were drawn out a bit to long, overacting of some annoying characters, and all the political issues thrown in. I felt these issues took up time that could have been used for more kills, violence, etc. on this twisted holiday. Overall, I found Election Year a solid sequel in the Purge series." 3.5 Stars

Clark Little - "An interesting concept has yet to be fully realized and reckoned with in three movies. Instead of delving deeper into the socio-economic theme that it flirts with, the film decides to spend more time with slow-motion, masked teenagers lamenting about their parents and the lack of candied treats in their life. No joke- it’s a big chunk of the film. The Purge: Election Year features Neo-Nazis, Crypts, European tourists and Republicans. And despite this “all-star” cavalcade of clichés, it still couldn’t trap my audible sighs. I rolled my eyes so hard I think I pulled my cornea. I doubt this franchise is finished with fleecing the interest of the public, but I certainly am." - 1.5 Stars

The Creature of the ComiCombs - "There's so much that could be done with a concept like The Purge. Unfortunately, with Election Year there is a lot left to be desired. I couldn't find a character to get behind and everything that took place was very predictable. Because of that I found myself bored through a lot of the movie. Not the worst movie I've seen but I still don't recommend watching this unless you're a big fan of the Purge series." - 2.5 Stars

Math Mage - "I've been reading a lot of Warhammer 40K lore recently, so I couldn't help but see the influence of Chaos in the impossible morale of the rioters, purgers, and random lunatics in this film. I don’t care how psyched you are, if a superhuman warrior appears and kills 4 of your friends in less than 20 seconds you’re gonna at least pause, maybe run or try to surrender. This just contributes to the uneven feel of the film. Despite that I was able to enjoy the almost slap-stick level carnage, but could barely manage to care about the otherwise sympathetic and interesting characters. Characters like Realist Princess, Captain Bad-Ass, and Minority Support Trio Who Conveniently Are All Expert Fighters Because Brown People Live Dangerous Lives And That’s Not At All A Racist-generalization." - 2.5 Stars

Lord Battle - "The Purge: Election Year could have been anything but what it ended up being is a fun violent romp that becomes bogged down with political shaming. But once the funs gone, it just won't end. Awesome concept, insanely boring script." - 3 Stars

Huntress - "The Purge: Election Year is a very confused movie; it feels like the filmmakers just want to make a modern day splatter film but feel pressured to class it up with political satire drama, which is not what their audience is looking for, judging by the theatre we saw this in. I just had so many issues with this movie that any fun I might have had watching it couldn't survive the night." - 2.5 Stars

It takes a special kind of person to put on a Halloween costume and semi-randomly murder people. I don’t know what kind of person that is and the film makers don’t seem to know either. I say that because even if you accept the base premise*, there are some logical extensions that are not present. Such as:

The film seems uninterested in answering these questions but answers other ones instead. Questions like:

In total this film has the exact same problem as its predecessors: Squandering its own premise.

*The government makes all crime legal for one night a year and this is a popular event.
**Anyone/Everyone could be a murderer! Trust no one outside your immediate family! Especially not the other races! 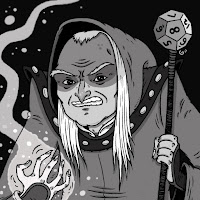 The Overlook Theatre materialized on 6/30/2016 for the 7PM show at Century Tanforan.
*Based on the star ratings turned in by character reviewers, others viewed and got to "Dislike" or "Like" but that does not effect the rating.
Posted by Lord Battle at 12:54 PM