This is the first well rounded week of movies we've had in weeks and I'm excited about it!
We start off light-hearted, with Balboa's AniMonday screening of Spirited Away. I love the creatures in this family friendly fantasy movie. From there, things get darker as Terror Tuesday presents The Sentinel at the Alamo Drafthouse. I've actually never seen this one, so I'm very excited! Every still I've ever seen from this film looks insane.

Wednesday is the busiest day surprisingly! Not only is Rewind Wednesday happening at the Balboa, and Weird Wednesday at the Alamo Drafthouse, it's also the Sleaze Apocalypse at the Roxie Theatre! This is a one night event, curated and hosted by Joel Shepard, who was the guest on the Overlook Hour a couple weeks ago.

And the cherry on top is one that I've been waiting for for months... Unfriended 2: Dark Web! Several of the Overlook's creatures were lucky enough to check this one out at an advanced screening last week and, well.. we recommend it! 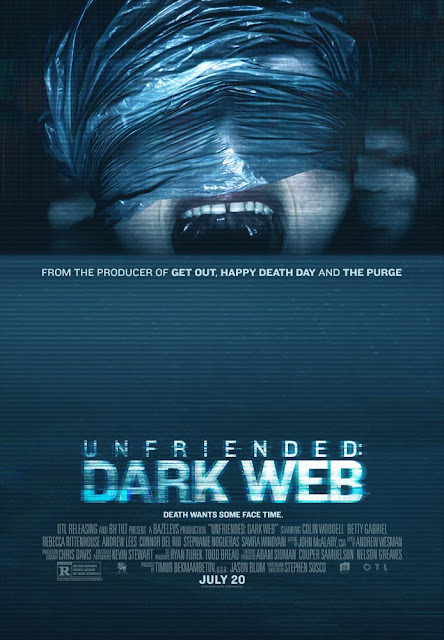 Unfriended 2: Dark Web (2018)
Early Screenings Thursday 19th (1hr 28min)
Opens Friday 20th
Horror (Rotten Tomatoes)
When a 20-something finds a cache of hidden files on his new laptop, he and his friends are unwittingly thrust into the depths of the dark web. They soon discover someone has been watching their every move and will go to unimaginable lengths to protect the dark web. 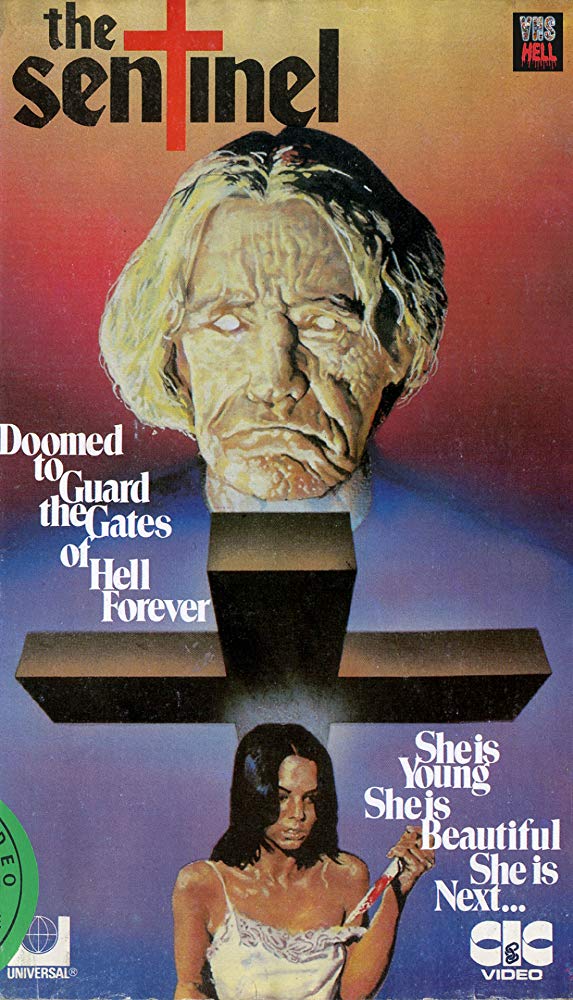 The Sentinel (1977)
Tuesday 17th @ 10pm (1hr 32min)
Drama/ Horror/ Suspense (Rotten Tomatoes)
In the wake of such Satanic-themed thrillers as Rosemary's Baby, The Exorcist and The Omen comes The Sentinel. When New York fashion model (Cristina Raines) splits with her fiance (Chris Sarandon) and moves into an old brownstone, she soon discovers she has more than she bargained for in the lease. As luck would have it, a mysterious blind priest (John Carradine) who lives upstairs happens to be guarding the doorway to Hell, and she has been chosen as his replacement. Incidentally, when the door is finally opened, out spills an assortment of deformed humans whom director Michael Winner hand-picked from hospital wards and circus sideshows. 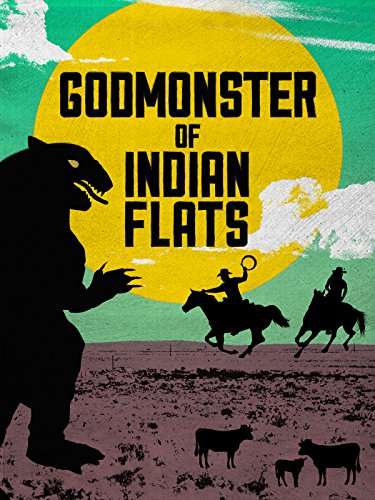 Godmonster of the Indian Flats (1973)
Wednesday 18th @ 10:15pm (1 hr 29min)
Horror/ Western (IMDB)
Virginia City, NV, is home to the Comstock Lode, a mine that struck big in the latter half of the 19th century. One hundred years later and the city looks very much the same, thanks to the efforts of Mayor Charles Silverdale (Stuart Lancaster), who has bought up most of the property and restored the town to its historical state. When a representative for an Eastern mining concern (Christopher Brooks) comes around trying to buy up shares in the Comstock, Silverdale and his henchmen must go to some extreme lengths to discredit him, framing him as a dog-killer and even attempting a secret lynching. Meanwhile, anthropology professor Dr. Cyrus Clemens (Kerrigan E. Prescott) and a local sheep rancher named Eddie (Richard Marion) have made an astonishing discovery: One of Eddie's flock has given birth to a mutated embryo that could prove a cellular realignment theory that the doctor has been working on in his secret laboratory. 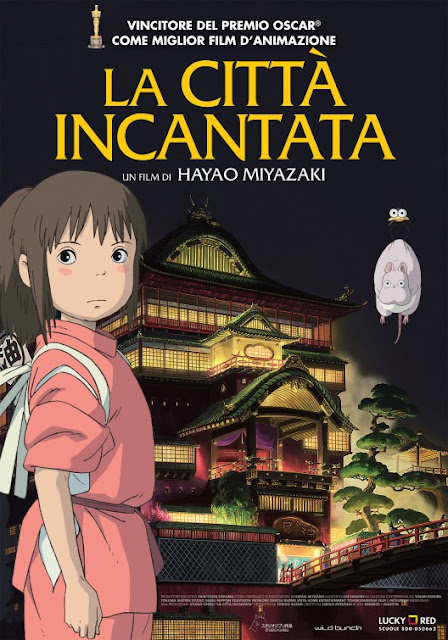 Spirited Away (2001)
Monday 16th @ 7:30pm (2hrs 5min)
Fantasy/ Mystery (Google)
In this animated feature by noted Japanese director Hayao Miyazaki, 10-year-old Chihiro (Rumi Hiiragi) and her parents (Takashi Naitô, Yasuko Sawaguchi) stumble upon a seemingly abandoned amusement park. After her mother and father are turned into giant pigs, Chihiro meets the mysterious Haku (Miyu Irino), who explains that the park is a resort for supernatural beings who need a break from their time spent in the earthly realm, and that she must work there to free herself and her parents. 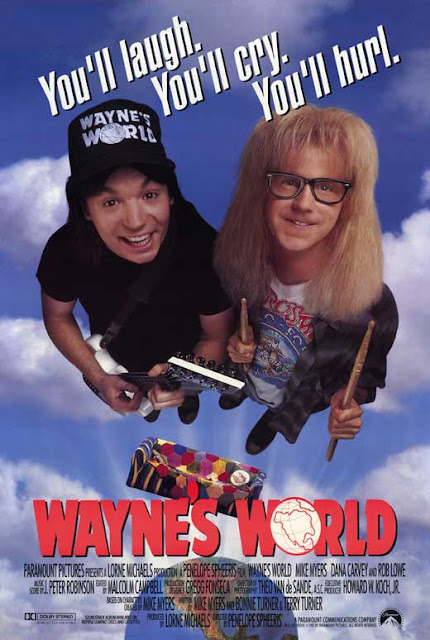 Wayne's World (1992)
Wednesday 18th @ 7:30pm (1hr 34min)
Comedy/ Music (IMDB)
Originally a skit on "Saturday Night Live" during the late '80s and early '90s, "Wayne's World" is about two teenage dudes who host a public access TV show, which is mainly about rock, babes and people who live in the area. One day Wayne and Garth go to a rock concert, and Wayne falls in love with a bass guitarist named Cassandra Wong. Wayne spends the rest of the movie trying to get Casandra to fall in love with him. He also struggles with a network executive who wants to buy the rights to his show. 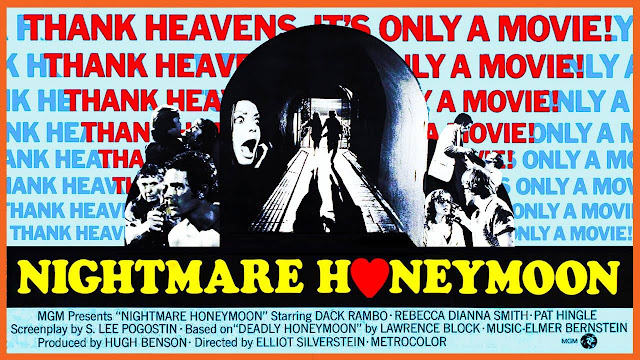 
They don’t exist anymore, but there used to be disreputable movie theaters in all major cities that showed double and triple features of low-budget genre films. These theaters could be spooky and intense places, catering mostly to emotionally damaged solitary men. Strange things happened in these decrepit, dark spaces, which served as anarchic dream palaces for freaks of all stripes. Curator Joel Shepard has been collecting grindhouse horror, softcore sex, and action movie trailers from the 70s and early 80s for decades. Many of these films could never be made today. Tonight he presents a rollicking and sometimes disturbing program of the best of the best.
All killer, no filler, and everything on real celluloid 35mm film!

Curated and hosted by Joel Sheppard 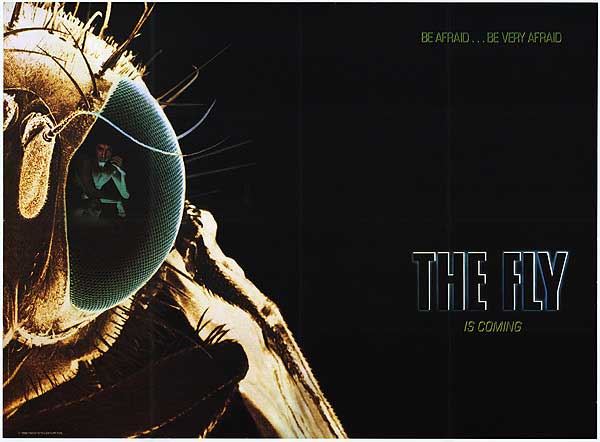 The Fly (1986)
Thursday 19th @ 7pm (1hr 36min)
Drama/ Horror/ Sci-Fi (IMDB)
Considered fairly gruesome in its day, the original 1958 The Fly looks like Mister Rogers' Neighborhood compared to this 1986 remake. Jeff Goldblum and Geena Davis star as Seth Brundle, a self-involved research scientist, and Veronica Quaife, a science-magazine reporter. Inviting Veronica to his lab, Seth prepares to demonstrate his "telepod," which can theoretically transfer matter through space. As they grow closer over the next few weeks, she inadvertently goads Seth into experimenting with human beings rather than inanimate objects. Seth himself enters the telepod, preparing to transmit himself through the ether -- but he doesn't know that he is sharing the telepod with a tiny housefly. 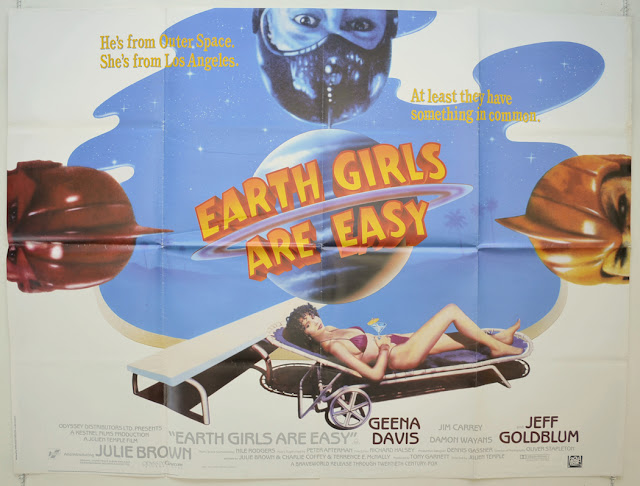 Earth Girls Are Easy (1988)
Thursday 19th @ ~9pm (1hr 40min)
Comedy/ Musical/ Sci-Fi (Rotten Tomatoes)
In this madcap comedy, Geena Davis plays Valerie, a manicurist living in the valley with her cold fiancé, Dr. Ted Gallagher (Charles Rocket). At the Curl Up and Dye beauty salon where she works, Valerie enlists the help of her boss, Candy Pink (Julie Brown), for some style advice to try and win back Ted's affections. After undergoing a brand-new hairstyle, Valerie learns that Ted is having an affair and she kicks him out of the house. Soon, while lounging around in her bikini, a spaceship from the planet Jhazzalan crash-lands in her swimming pool. Curious, Valerie befriends the ship's inhabitants -- three horny aliens covered in fur named Mac (Jeff Goldblum), Whiploc (Jim Carrey), and Zeebo (Damon Wayans). Introducing her new friends to Candy, the aliens get a shave and a total makeover transformation into hot, available dates. They all go out dancing at L.A. nightclubs and party.

Both screened in 35mm