The Overlook Theatre Reviews: Be My Cat: A Film for Anne 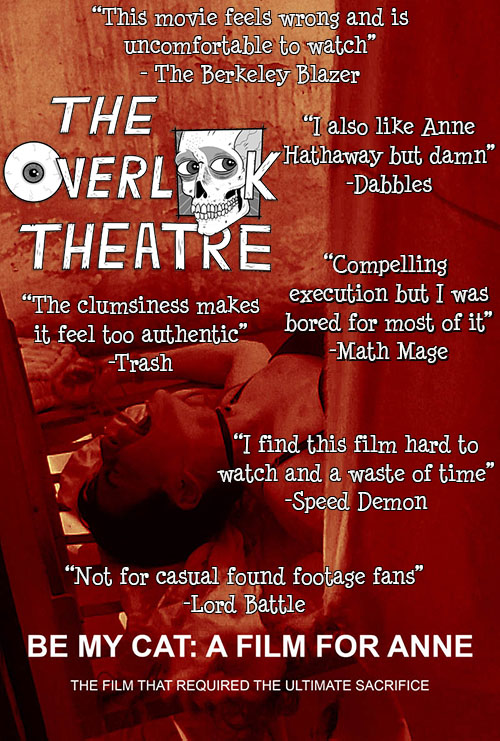 The Berkeley Blazer - "This movie feels wrong and is uncomfortable to watch, and it’s obvious the filmmakers set out to do this. Be My Cat is a Romanian found footage film about a delusional man who is making a movie for Anne Hathaway which somehow (of course?) means he going to murder young beautiful women. There is merit and good work here, and yet I can’t help but wonder why so many films eventually lead to young beautiful women being tortured to death. It’s not particularly graphic in this film, but it’s disturbingly realistic and the actresses do an amazing job at conveying agony and desperation, but for most of the movie I was asking myself, “Why am I watching this, what do I get from seeing this unfold?” And yet I cannot deny this film has some bravura performances and brilliant moments, especially in the final confrontation. Horror fans should go ahead and take the plunge, but your average viewer is probably better off without this genuinely disturbing but ultimately empty experience." - 3 Stars

Dabbles - "Cringe worthy from beginning to end. I like found footage but this was a bit too much. I also like Anne Hathaway but damn. Not my cup of tea." - 3 Stars

Trash - "I had to sit with Be My Cat on my mind for a few days before it really clicked, I was actually upset by it, and when that died down, I realized how impressed I was. It's too long, and a lean 70 minute cut of this movie would make for a brutal found footage treasure. Forget the explanation on the top, it would have benefited from just starting, no titles, no background. This is something you found, someone’s video diary that you shouldn't be seeing. The clumsiness makes it feel too authentic, and at one point I started questioning if the guy playing the filmmaker playing a character in his own film is not really playing a character at all. Nah dude, be your own cat. You're the creepiest person I've ever seen." - 3.5 Stars

Math Mage - "Entertaining premise, compelling execution but I was bored for most of it. Also this seems like a lot of work. Why not just mail her a bomb or assassinate Ronald Reagan like a sensible stalker." - 3 Stars

Speed Demon - "Seemed interesting but then became uninteresting fast. The dialogue really killed the real feel you get from found footage due to them repeating themselves over and over again. As if they were trying too hard but failed, to the point where it's like, get on with it already, we heard you say that three times. I find this film hard to watch and a waste of time." - 2 Stars

Lord Battle - "Easily the best cast in any found footage movie I've seen but don't expect a film that feels like an authentic LiveLeaks video to win an Oscar or anything. In fact, I should make this clear: Be My Cat is not for casual found footage fans. The film isn't particularly gory or gruesome but the high level execution (mainly the ladies's performances!) of something that so awful that feels so real is brutal. Be My Cat is a true found footage treasure." - 4.5 Stars

KillDozer - "With a budget of $10,000 and a dream, Adrian Tofei manages to pull off something rarely seen in the found footage realm of horror; real creepiness and an unsettling believable character. With that being said and giving credit where credit is due, the film is not without flaws. The pacing feels off with long overdrawn scenes and a repetition that makes you want to shout MOVE ON WE GET IT! The acting is solid especially from the director Adrian Tofei, who stars in the film and is so realistic that I would have anxiety meeting him in person. I thoroughly enjoyed the ending but oddly enough thought the torture scenes ran way too long and weakened the entertaining appeal of the main character. All in all it was worth the watch and I look forward to Tofei's next film "We Put the World to Sleep"." - 3 Stars (not collection worthy, you can get the effect of the film by watching half and turning it off but I have a bias against found footage films)

Huntress - "As far as found footage is concerned, Be My Cat pays immaculate attention to the rules. The film is 80% one guy with a camera in his hand and we’re seeing most of it in real time.In terms of a re-watchable and enjoyable movie, it's not as perfect, but even that makes it better as found footage. Be My Cat doesn’t waste time; when the camera starts rolling, the story starts spinning. Then again, Be My Cat simultaneously manages to spend too much time on a lot of scenes. I won’t call them a waste, because a full week later, I’m still questioning how much of that character was real..." - 3.5 Stars

The Great Hornito - "Be My Cat really feels like an actual crime video that the police found. I felt like I shouldn't be watching it. Really good writing and very creepy." - 4 Stars

Adrian Tofei - In 2013 I moved from Bucharest, Romania’s capital, to my home town of Radauti, with my mother, and began to live in character and experience some of the circumstances that surround this character’s life. He lives with his mother in a small Romanian town, raises money through an Indiegogo campaign, buys a video camera, makes an online casting call and selects the actresses by their pictures and videos, rents a pension and waits for the actresses to come. I also raised a part of the production budget through Indiegogo campaigns, selected the real actresses only by the pictures and videos they sent online, rented a pension and met the actresses for the first time at the filming location.

The movie’s script had only plot points that needed to be respected, with no lines, which needed to be improvised, because that’s real life: you never know what the other person will say or what you will say of what will happen until the exact moment when the words are being said and the events are happening.

All our words and actions in real life are the result of our goals, of our efforts to achieve our goals. We can achieve our goals only by interacting with other people, by changing something in the people with whom we interact in order to achieve our goals. But we are not aware of the other’s goals, so, when they have a goal towards us that is incompatible with our goal towards them, conflict arises! So, months before they came to the filming location, I spoke with the actresses by email and on the phone and instruct them to select goals for their characters (the actresses that they are about to play in the movie), goals towards my character (the guy who pretends to be film director in the movie). I gave them a list of goals, but told them to select whichever they want, but keep the choice secret, only for themselves. I didn’t want to know their exact goals because that way genuine conflict could not be born during filming (conflict in character, between the director that I was playing and the actresses that they were playing, not between me and the real actresses).

The actresses also didn’t know much about what was about to happen at the shooting and also they knew very little about the movie’s plot. This was because I wanted to capture on camera their authentic reactions to new, surprising elements. No matter how great actor you are, I’s impossible to perfectly recreate an authentic reaction to something that should be new to your character, but it is not new to you as an actor because you read about it in the script or rehearsed it. That’s why the actresses didn’t knew a lot of plot elements, didn’t knew what I was about to say or do in character, and I also didn’t knew what they were about to say or do in character. But this wasn’t random improvisation! Their performances were directed by the goals they previously selected from my list and the plot’s key points! We also didn’t rehearse the scenes and didn’t take double shots, because the second ones would have never been authentic, the reactions would have never been authentic as in the first ones. We just shot a lot of footage and then I selected the best of it!

In order to clearly differentiate the fictional relation between the guy I was playing and the actresses they were playing and the real relation between me and the real actresses, I implemented this rule: whenever it’s the real me giving them instructions we speak Romanian, and when I switch to English then that’s the sign that it’s my character giving instructions to the actresses they are playing. The Romanian-English switch was the out-of-character versus in-character relation switch.

An this method of work reworded us big time! Because we actually went in character through authentic transformations during filming, we had real revelations in character! Two of them are the ones that my character has near the end of the movie; one of them was not scripted at all, it was just the result of creating the right circumstances for such a thing to happen! I needed almost a month after the shooting to wash those experiences from my soul. 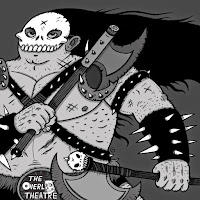 The Overlook Theatre materialized in a residence for a screening on  2/9/2017
*Based on the star ratings turned in by character reviewers, others viewed and got to "Dislike" or "Like" but that does not affect the rating.
Posted by Lord Battle at 3:00 PM