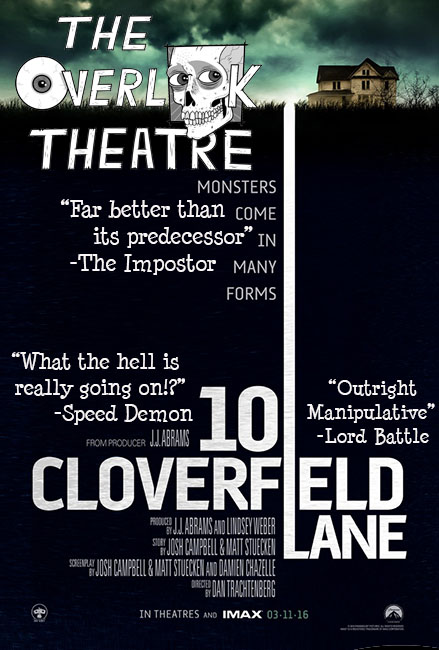 The Impostor - "10 Cloverfield Lane is a gripping, intense film filled with claustrophobic situations. The great acting, dialogue, and story kept me on the edge of my seat the entire film. It's very unpredictable and will keep you guessing. 10 Cloverfield Lane is by far better then its predecessor in my opinion. Overall I loved this film and look forward to owning it on bluray in the near future. So go check it out you won't regret it." - 5 Stars

Speed Demon - "Damn! When the film hits about four minutes in, the out of nowhere craziness is ridiculously awesome. Intense! An awkward situation paves the way for a mystery yet to unfold. What the hell is really going on? I do not believe you need to see its predecessor. You can easily watch this and then Cloverfield or vice versa. This film is super fun and entertaining. Hell yeah!" - 4 Stars

Lord Battle - "I may be the only person alive upset by the fact a film was released under the Cloverfield name, yet wasn't found footage. Having said that, 10 Cloverfield Lane is somehow more effective at placing the audience in our heroin's shoes by just being outright manipulative. 10 Cloverfield Lane simply works in every aspect a good film should" - 5 Stars

Math Mage - "Excellent acting all around. The other actors do a great job remaining relevant in comparison to John Goodman's scene stealing mania." - 4 Stars

Huntress - "I barely blinked during 10 Cloverfield Lane and it definitely made me an easy target for all the startling moments in the movie. It was entirely too easy to get lost in the mystery and forget about trying to figure the story out, I was just captivated the whole time!" - 5 Stars

Dabbles - "I came into this thinking that it was a sequel without reading or looking at other synopsis, but when the first scene rolled, I figured this is a whole different ball game. And with that said, this movie is awesome, filled with so much character work and suspense. The editing and "pops" in the middle kept me at the edge of my seat all the way. I hope they keep coming out with more "Cloverfield" movies in the future." - 5 Stars

Ice Giant - "John Goodman is such an underutilized actor who is always great in every movie he's in, his presence alone was enough to make me give this movie a shot. Unlike a lot of people, I actually enjoyed  Cloverfield and was wondering how they would even put the two vastly different movies together. ...Short answer is they don't and Abrams was right to call it a "spiritual successor." Not being an actual sequel takes nothing away from this movie. If anything it helps, since it was free to tell its own story." - 5 Stars

Clark Little - "85% of 10 Cloverfield Lane is outstanding. And that's far better than my collegiate GPA" - 4 Stars

Berkeley Blazer - "This is primarily a work of suspense that did its job admirably. I constantly found myself having to reassess the what was happening in the movie, largely due to a dynamic performance of the ever-impressive Goodman. The premise of Cloverfield I found promising but was severely underused. The closed-circuit thriller movie and the world outside added suspense to the film but I could have done with a more organic and evenly proportioned blend. Nonetheless both aspects are enjoyable and worth watching, and if nothing else a great excuse to see Goodman as terrifying and lovable crazy butt." - 3.5 Stars

Originally titled The Cellar, 10 Cloverfield Lane is a film that had its ending rewritten to fit in with an existing films mythology. What caused this drastic change? Read all about it here as I'd just like to point out the effect this choice had over audiences.
When approaching a film titled 10 Cloverfield Lane, one could assume an association to the JJ Abrams found footage monster movie Cloverfield but the trailer put to rest that entire aspect as one can clearly see that the shots are edited together. This left most audiences wondering what the Cloverfield connection would be, with a majority of people assuming our characters would simply be hiding from the original monster. As it turns out this confusion not only bleeds into the film but becomes a major theme.
Misleading the audience is not a new concept; Hitchcock loved tricking audiences by disguising a spy as an old lady or a murderer as a charming young man. He would play the audience’s assumptions against them and the writing team of Drew Goddard and Daniel Casey channeled into this while working on 10 Cloverfield Lane. This theme of deception became apparent to me once Emmett (John Gallagher, Jr.) told Michelle (Mary Elizabeth Winstead) to think of her room as a good thing because at least she has a door. That change of perspective transforms the windowless dungeon into a bedroom in need of a couple of homely adjustments.
Internal transformations make up a lot of 10 Cloverfield Lane. Characters, locations, and even the genre of the film all take several turns, just as the audience was comfortable with them. Howard (John Goodman) has some of the most drastic changes, ranging from behavior to appearance. His character is a conspiracy theorist which, in a standard horror movie, would have marked him as untrustworthy and an obvious threat, especially in a film called The Cellar. But in 10 Cloverfield Lane he acts as a voice of reason since obviously the audience knows more about this film than the characters. I personally think this film has worked if at any point during the movie you felt "safe" below ground. I was going back and forth the whole film, much like the protagonist. Although for her, it became difficult to argue as soon as she saw some evidence in the form of the neighbor woman coming to the shelter's door. That is, until Howard's disarming and heartbreaking story of his past starts falling apart and he's tied to a girl's disappearance and assumed murder. And just like that, all the authority he had is gone.
10 Cloverfield Lane really makes you work as an audience member. Watching these characters meld into a sort of family unit, only to uncover more pieces to the puzzle and realize that Michelle's initial suspicions were more deserved than she knew, kind of throws the assumptions about where this story was going out the window. And in this constant back and forth, in the very last 15 minutes of the movie, the story ends up going exactly where we assumed it would.

Love or hate the ending, if there was an instance where you weren't sure what was coming, I'd say 10 Cloverfield Lane won. Especially if you're a jaded horror fan. 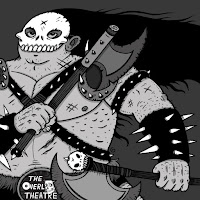 *Based on the star ratings turned in by character reviewers, others viewed and got to "Dislike" or "Like" but that does not effect the rating.
Posted by Lord Battle at 2:36 PM