Devil's Due or a Retelling of Paranormal Activity 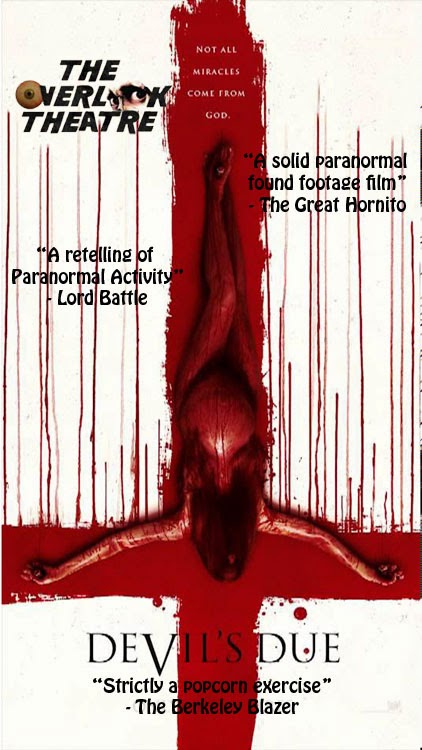 The Great Hornito - "Devils Due a really sold paranormal found footage film the only problem I have with it is that it is generic and the ending was boring. The acting and story were really good but I feel like I've seen movies just like this many times over the last 5 years or so." 3 1/2 Stars

Lord Battle - "Pretty much a retelling of "Paranormal Activity" with nothing new to offer to the found footage genre." 3 Stars

The Berkeley Blazer - "I'm liking this movie, but strictly as a popcorn exercise. The beautifully simple performances of the two protagonists, the solidly crafted tension-building, and the Manichean cosmology are assets for most of the film, yet the ending frazzles and slumps so limply, failing on every possible level, and those assets are poisoned by this dreadfully unimaginative conclusion, which fails to address neither the religious narrative nor the domestic narrative in any satisfactory way." - 2 1/2 Stars

The Impostor - "Overall, Devils Due is an entertaining film. It begins very promising and the two main actors did a great job, but for me the finally was a bit of a disappointment. Nothing new was brought to the table. Devils Due is your typical found footage/supernatural horror combo we have seen before." - 3 1/2 Stars

Huntress - "After such an entertaining beginning and strong ground work I was hoping for more from the second half of the movie. The anti-climatic ending wasted a lot of potential." - 3 Stars

"Devil's Due" has helped me understand why people call found footage the worst genre in horror. I originally thought people disliked the genre because of it's attempt to seem real, which never made sense to me since all movies try to suspend disbelieve and found footage simply had an advantage. I now understand that this advantage draws in lesser talents or is a crutch for a lack of ideas.

This film suffered from the latter, the last couple of scenes were by far the worst of the film, not only were they dumb but they weakened the story as a whole. I'm of course referring to the 2 police officers that were either cult members playing a really cruel joke for no reason or real police that are comically bad at their job. The Berkeley Blazer said it best "They couldn't tell that their house was exploded?". The other scene that was lazy and stupid is the last one showing the next newly wed couple. Here are 3 reasons why I hated this scene: 1 The cab driver, why did it have to be the exact same guy? It would have been a lot scarier if it wasn't him. It also would have implied a lot more people are out there. 2 Imagery of the Eiffel Tower is not scary and France does not give off the same tourist lost in a foreign land vibe. But if they really felt the need to keep this scene they should have at least shown the driver taking them to the catacombs or something. 3 The addition of this scene only leaves you with questions that ultimately poke holes in the story, like "So how do they know about newly weds and the duration of their honeymoons?" or "Are all the girls "Born from death" or was that a coincidences?" or "How many of these babies do they need, if in the womb they can psychic slam people?".

The other problem with this film is it basically just retells the "Paranormal Activity" story. I mean we even ended up referring to the girls after the film as the marked ones. I could write about all the similarities between the paranormal series and this film but I'd rather people see it for them selves. I also went on a rant above when the movie wasn't terrible it just did nothing for the found footage genre, or horror in general. The Great Hornito put it best when he said, "If this was the first found footage movie I ever saw I would have loved it but since I have seen better ones it's just okay."
- Lord Battle

*Based on the star ratings turned in by character reviewers, others viewed and got to "Dislike" or "Like" but that does not effect the rating.
Posted by Lord Battle at 11:54 PM