Awesome Theatre's HOLY SH*T THAT WAS SCARY PART 2: THE CITY 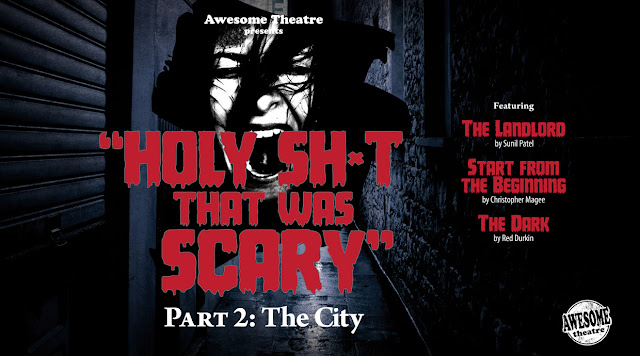 THE LANDLORD
Written by Sunil Patel
Directed by Colin Johnson

THE DARKNESS
Written by Red Durkin
Directed by Tanya Acosta

I’d be lying if I said that I knew all that much about theater. My experience doesn’t go much further than a kindergarten performance of The Three Little Pigs and an eighth-grade performance of A Midsummer Night’s Dream. I played the Big Bad Wolf and Puck respectively.

I know what you’re thinking, and yes, I was an adorable big bad wolf.

Beyond that, I’ve seen a few film adaptations of stage plays (William Friedkin’s Bug comes to mind). Like most, I had to read some Shakespeare in high school and I’ve watched Stage Fright (1987) a few times. That’s the extent of my theatrical knowledge.

At its core, I think there’s something inherently intimidating about theater. Society leads you to believe that (school plays be damned) it’s an activity reserved for the Bourgeoisie. I felt a degree of anxiety on my way to Holy Sh*t That Was Scary. I imagined a high-brow production, presented by a clique insular thespians, and aimed at an audience far above a plebeian like myself.

What I got was a revelation. I adored Holy Sh*t That Was Scary. As a lifelong horror fan, it managed to be one of the most visceral experiences I’ve ever had in a theater.

Let me set the stage.

I leg it to Market at about 6:30 pm and head for PianoFight. Having never been there before, I gave myself a little extra time to make sure I found it alright. Coming from 4th, I took Market to Turk, to Mason, to Eddy, to Taylor. I haven’t spent a ton of time in that part of the city and forgot just how much of it overlaps with the Tenderloin.

I’m not necessarily uncomfortable in the TL, but it’s inarguable that it’s the bad part of the city. It’s hard to not feel a little unease crossing from the tech-startup bloated streets of SoMa to the poverty-stricken streets of the ‘loin.

It’s not just the neighborhood though. For those unfamiliar with San Francisco, much of the city doesn’t feel like a city. Buildings rarely rise above five or six stories, and in places, the transition from city to urban sprawl is indecipherable. Downtown, however, is a tangle of skyscrapers, tight streets, and Gordian knots of foot and vehicle traffic. The constant shadow of the metal and concrete behemoths, and the nonstop thrum of humans makes me claustrophobic.

Regardless, I round the corner onto Taylor and make my way to Pianofight. I hopped inside, grabbed a beer, and headed for the theater.

The first thing I saw upon entering, besides the splotchy black of the stage, was a pile of tarps, garbage bags, and other refuse. I almost thought I’d walked into the wrong room or maybe out a back door. I wondered for a moment, “maybe thespians are messy. Maybe these are mess-pians.” (I’m sorry.)

Then I looked left and saw the audience. I took a seat, sipped my beer, chatted with my seat-neighbor, and waited for the show to start.

Okay, I’ve wasted your time with about 300 words describing a trip that amounted to maybe 10 blocks. You’re welcome. Let’s get on with the show.

Holy Sh*t That Was Scary is comprised of three segments and a wraparound, not unlike the formula of found footage classics, V/H/S and V/H/S 2. Although I don’t have much experience with theater, I felt like this format worked well, especially in the realm of horror. The breaks between segments were comprised of blackness and video segments that included titles and credits for each segment as well as found footage clips central to the wraparound.

Below, I’ll detail each segment individually. There’ll be spoilers galore, but because (to the best of my knowledge,) this was a one-time production that shouldn’t be a concern. Rather, I’d recommend reading it for fun, and to gauge interest in future productions from Awesome Theatre, Colin Johnson, and the others involved.

The play begins with a video segment, where the two leads (Olivia Brown and Melissa Keith) meet in an apartment to discuss a missing friend. We learn that they were sent a mysterious package that contained a videotape.

Despite the extremely distorted video, they realize that the tape shows a person with the same birthmark as their missing friend. We eventually learn that the friend had allegedly died in a ferry accident, though her body was never found. With only a return address, they embark on a journey to a seemingly abandoned building in a bad part of the city.

This is how we transition to the stage portion, where we find our leads in the basement of an abandoned warehouse. Eventually, they find an audio recording, and we begin our first segment.

This segment opens with a man planting the recorder that our wraparound characters later find, and then confronting his landlord about an unfair “Asylum Tax” that she charges him because he’s an undocumented immigrant. The tax has become too much, on top of his already high rent, and without a reprieve, he’ll no longer be able to support his family.

The segment, for the most part, plays out as an argument between the landlord and her tenant, before diverting into the supernatural. The dialogue is quick and punchy, and the acting was superb. Unfortunately, I wasn’t able to find the names of the actors for this article, but they deserve recognition. The tenant is portrayed as haggard and downtrodden, and the landlord (depicted with a twangy southern drawl) excellently captures the “I’ve got mine” mentality of a slumlord.

As their argument reaches its climax, the tenant reveals his recorder, and plays it back to his landlord, only to realize that it’s captured something otherworldly. A demonic voice rumbles from the tapedeck and seems to possess the landlord.

The segment ends with the demon taking over the body of the tenant to replace the landlord and continue providing the demon with new lives. When the demon takes over, the performances stay strong, as both actors take turns being possessed, showing off some particularly effective body movement to give the sense that something else was controlling their skin.

This segment is by far the most political of the three, and insomuch as it was, felt the most timely and relevant. It also had one particularly effective “jump scare” involving a desk. Together, these provided a great introduction to Holy Sh*t, giving us an idea with what to expect (and what will be unexpected) without providing all its scares upfront.

After this scene, the wraparound continues, providing additional context into the first segment. The women find newspaper clippings that reveal that the tenant grew to become an infamous serial killer who murdered his tenants, apparently continuing the sacrifices for at least 10 years.

Soon after, the leads find a body bag, corpse and all, and we segue to our next episode.

START FROM THE BEGINNING

Start From the Beginning was my favorite segment but is also the most difficult to write about. It follows a discussion between a woman and her therapist (Jan Gilbert and Michael Magee), as she discusses a past trauma involving a man whose face appeared “wrong”.

Throughout the conversation, the story becomes simultaneously more outlandish and more real. As the segment progressed, the therapist repeatedly asks the patient to “start from the beginning,” beginning a new iteration of the same story.

By the conclusion, the therapist has become a raving lunatic as the man with the “wrong” face has come to take him to his inevitable fate.

I’m not doing it any justice, but the whole segment is pure, beautiful dream logic with a heavy dose of cosmic horror. It felt like equal parts Lynch and Laird Barron, and the effect was amazing. I wish I could talk more about it, but it would be a disservice to Christopher Magee’s phenomenal writing. This is almost part of why it’s great. As I write this, I recall it more as a nightmare than a true experience, and it’s rare that any kind of media would affect me like that.

On the topic of writing, the dialogue, especially as the lead actress's monologue about the indifferent and terrifying cosmos, was fantastic. I’m a huge fan of Lovecraft and most horror in that vein, but it’s not known for having particularly engaging characters. Seeing it delivered with the fervent passion of these actors was transcendent.

This segment ends, and we return to the wraparound, where the leads get as close as they ever will to their lost friend.

They find a camcorder and play the tape inside.

The final segment again features two actors, one playing the role of the missing friend, the survivor of a ferry accident, and the other as a madman who’s kidnapped her.

We learn that she’s been selected by some malevolent force (perhaps the same one as in The Landlord), to act as a vessel. Her kidnapper holds deep resentment that she was selected instead of him, but because he fancies himself an acolyte of this malevolent being, he’s not committed to outright murdering her.

This segment above all others has extremely impressive physical acting. The leads, Sarah Coykendall and Travis Maider, both take on far more physical tasks than we saw in previous segments.

As the villain, Travis constantly spasms and twitches, toeing the line between neurological condition and demonic possession. He plays a near-perfect maniac.

Sarah, on the other hand, is a fantastic hero, who provides what may be the most cathartic moment in the entire performance. To escape her imprisonment she manages to get the jump on her captor and bludgeons his head in with a telephone.

This near-final scene has all the brutality you’d expect, masterfully hidden (just barely) by the garbage bags I’d mentioned earlier in this article. By using a rotary phone to do-the-deed, each hit provides a satisfying audio element.

Despite being a bit skeptical of theater coming in, I enjoyed the hell out of Holy Sh*t That Was Scary and I’m looking forward to Awesome Theater’s future productions, and the output of the creators involved in this production.

You can find more details about Awesome Theater at AwesomeTheatre.org.