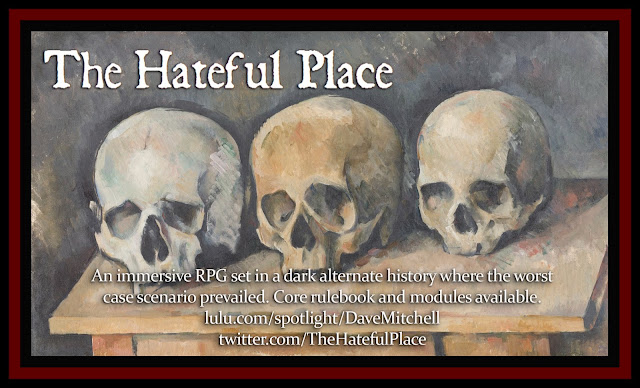 “The Hateful Place” is an RPG that hates you, and not just in a narrative sense with its bleak setting and unfair odds.  “THP” hates you on a mechanical level.

If you play this game your character will die.  I don’t mean that in the “I hate you but secretly I love you” Dark Souls way; your character will die miserably and permanently and that’s the point.  The system is a very simple 3 stat system* that can be covered in a single page.  This makes character creation (relatively) quick and easy.  Which is good since you don’t want an emotional investment in someone who’s going to die in half an hour (or sooner, more on that later).  Here’s why you’re going to die: all attacks deal 4d10 damage (except demons, they do 5d10 damage), PCs have ~30hp, monsters have 40, and demons have 100. Attacks include everything: thrown rocks, dagger in the face, laser cannon, stubbed toe, and way more.  Assuming the scenario doesn’t simply begin with you bleeding to death already, any conflict at all will lead to your gruesome demise.  This is not a game of heroic adventurers battling evil, or even underdogs struggling against impossible odds.  This is a game about watching your character die in horrible and (hopefully) entertaining ways.

The setting is the real selling point.  Left intentionally vague so that the system can be applied to a variety of genres, the whimsical and horrible dark fantasy comes through in both mechanics (as explored above) and in the prose and advice.  Except not really.  All of the books read like the notes an improv-loving GM would write to himself**, and there does seem to be a default setting if one reads between the lines.  It’s North-Central Europe in the age of pike and shot and if you told me that this was intended to be a campaign resource for Lamentations of the Flame Princess I would believe it.  The simple monster/demon rules would be an excellent solution to LotFP’s general lack of monster support.  This setting seems eerie and grim and I would love to play in it, but I can’t with just the info provided.  To paraphrase the title page, the Hateful Place only exists in its creator’s mind.

Additionally, as much as I praised it above, the system’s simplicity is also its biggest weakness. There’s no real way to differentiate between a toxic plant spraying acid in your face and a werewolf eating your leg if both deal 4d10 damage.  You can, of course, make up new rules for those specific situations, but if you’re doing that, why use these rules at all.  Even worse, as simple as they are, the character creation rules still require rolling stats and choosing classes such that character creation could take longer than the scenario.

So should you buy this system? Emphatically yes! Although as I can’t recommend it as a game system, it is a wonderful campaign resource for any GM looking to inject some whimsical horror into their game.  The random tables especially help fire up the imagination, with entries like: STARTING PLACE (burning an innocent person alive as a witch) and YOU ARE (bleeding to death).  I’m planning to send my ACKS campaign to the Red and Pleasant Land very soon and these books will be a great resource.
I would recommend “3” especially.  Although it reads like random ideas on post-its rather than a sourcebook, most of those ideas are good ones.  And the random tables could sell the book on their own.  Providing creative answers to questions like WHAT’S IN MY MOUTH and WHOSE HANDS DO I HAVE?


*which makes me nostalgic for Big Eyes, Small Mouth but that’s another story.
**I know because my notes look like that :)

Keep an eye out for VICTIMSHIRE which should be released the end of September!
And check out all of The Hateful Place books at Dave Mitchell's page on Lulu.com. 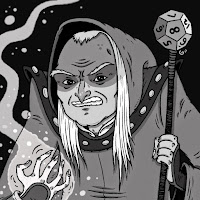