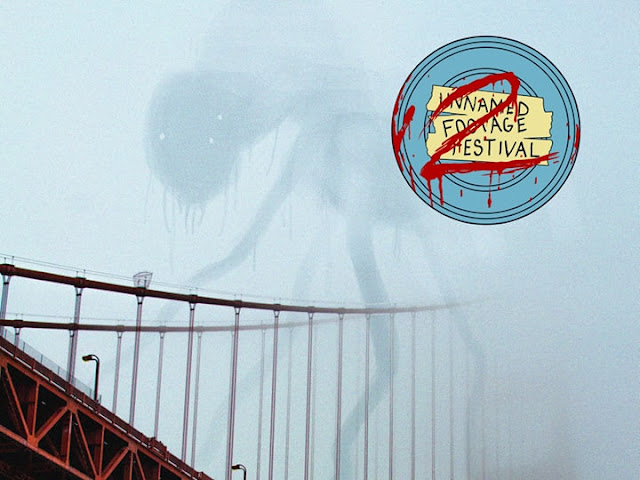 I thought I was going to be late. I woke up at noon, hazy from the edible and drinks I’d taken the night before. My girlfriend and our friend Jessica should be arriving at my house around 12:30 noon. We’ll be driving the short, but congested distance of Oakland to the city of San Francisco where we’ll attend the second year of the Unnamed Footage Festival.

We dusted through the deceptively dense traffic, smoke bellowing from the windows of Jessica’s 2003 Tercel. Parking was a fucking dream. Things were going too well. We arrived about halfway through Paranormal Activity: Tokyo Night, the opening film of the festival. We checked in. I grabbed a beer despite my empty stomach. My nerves were vibrating. After Paranormal Tokyo was the first Short Form Footage Block and my short film, Snake Bite, was playing. There was a decent crowd and all I could think of was the crowd shitting in their hands, tears streaming down their scowled faces as they chucked the excrement at the screen, appalled at what they were seeing, not content until the screen was covered. Then they’d turn to me, howling in pain and tearing at their eyes with their shit filled fingernails. What good was vision after this pie in the face of cinema. All that was good was dead. After tearing me to shreds they’d drag what was left of me into the depths of the ocean and..

Which brings us to a film by film recollection of the short film block. I’m just going to do a little blurb about each one, forgive me if my memory is a bit spotty, as I’m doing this a month later. I am a world class procrastinator.

Strong opening to the short block. There were quite a few quality tier actors at play here and there seemed to be some production value. The real gold is in the final moments when things get weird.

I couldn’t stop thinking of how fun this must’ve been for the couple to act and create together. Huddled over their devices and reveling in this found footage inspired weekend getaway. It would have been cool to hear them talk about it. They did a great job for what I’m guessing are first time filmmakers.

The tall can was a good idea. The joint might not’ve been. My nerves were on the fence. The damn thing started and it could not have gone better. I made a found footage movie in my undies and it went far better than I thought it could’ve. Two hearty tears fell from my right eye and you couldn’t have beltsanded the smile from my face.

This was a joy. A kind and pleasant meditation on art and creation and letting your inner self pop at all moments.

Did I miss this? It’s listed as 1 minute long, so I could have had a restroom break and got caught chatting with Clark? Sorry, Ryan Davis.

This is why I love UFF. I don’t have to sit through 14 shorts about ghosts in the corner of surveillance camera footage. I can see these fuckin' weirdos fumble hilariously through their odd ‘jobs’.

One of the more effective films in the block. You could see a slice of this thing and think that what you’re watching may be something truly sick and real. I did a Q&A with Benji, the films director, after and I believe he said he was working on a feature version. Should be nice and creepy.

An modern Orwellian game show that might exist in the purge or pre-hunger games universe. An effective villain helped this one. I can’t imagine anyone in our audience wouldn’t have strangled this dude given the chance.

The Lady from Tulon

A mock investigative TV episode.. I gotta be honest, I couldn’t make it through five minutes of this one. I had some insider information that this was the last short and quietly crept out of the theater and into the blinding San Francisco sun where I’d walk two blocks to the east and buy a 6 pack. The rest of the day was a beautiful 14 hours 38 minutes and 16 seconds of people screaming and waving low quality cameras in the dark.

And the audience selected Snake Bite as their shorts winner! Check it out below and follow its creator Robbie on YouTube to see what he makes in the future.