Found Footage Horror Comes to the Stage in San Francisco 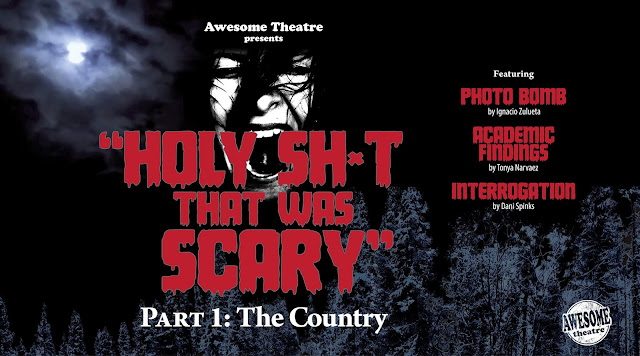 There aren't many good things I can say about Facebook lately, but there is one thing I must give it credit for. Specifically the Bay Area Horror Group, which I visit regularly. And that is that it turned me onto what sound like a revolutionary undertaking - a found footage horror anthology play... in San Francisco!

In exactly one week, we will be counting down to HOLY SHIT THAT WAS SCARY, which is being presented by Awesome Theatre at Piano Fight Productions. I saw those words on a poster, immediately dropped what I was doing to reach out and find out more. I was lucky enough to talk to the founder of the project, Colin Johnson.

How did you get involved with Awesome Theatre?

Anthony the Executive Director contacted me in 2013, asking if I’d consider directing Terror-Rama, which was a horror/comedy double bill of one acts complete with a horror hostess. The show worked, against all odds, and we decided to keep pushing ourselves, eventually creating a business that exclusively showcased weird new plays by local artists.


You have directed several shows with Awesome Theatre, ranging from camp to comedy. What would you say is your favorite genre to direct?

I love directing comedy. I direct for circus and work often with clowns and nailing the precision of comedy is absolutely invigorating, but I’m fascinated with horror. Horror doesn’t get produced a lot, and when it does it’s usually a gothic thriller or a Grand Guignol style campfest. I’m interested in translating the tools of effective horror filmmaking into the stage, what that entails, the challenges, the priorities. Much like radio, the stage limits your ability to truly frighten and manipulate what the audience experiences. You need to find creative ways to lean into your limitations, and in the process you boil the ideas down to their calcified foundation. It’s more stylized, and somewhat more tech-dependent, than most theatre, but it’s fucking exciting.


Where did the inspiration for a found footage horror anthology play come from and how long did it take to flesh out?

I’d been looking for platforms to work with horror writers, and after the success of (In Search of ) the Funniest Play Ever, which yielded two wonderful comedy commissions (and more to come), we wanted to put up another “greenhouse show”, which is a low-impact series of one-off performances designed to collaborate with new artists and develop new works. I pitched a horror angle, and then it was a matter of finding the perfect context. I'm a lifelong fan of horror and found footage, which I feel is one of the most primal and pure subgenres--as horror tends to be most effective in raw, simpler and less expensive forms. I've yet to see a truly magnificent horror film that had big budgets and fancy effects (with a few notable exceptions). I re-watched the V/H/S Trilogy and then came up with the ridiculous idea to tell stories like that onstage. The idea was broached last summer, and it literally took about five or six months to land on an approach that wasn't overly complicated.


What are some of your favorite found footage horror/ anthology movies?

The Blair Witch Project started it all for me. Man, that fucked me up. I was fifteen. It hadn't been released, yet, so there was no available information on the film. Then after the movie, like an asshole, I went for a run in the woods. Stupid idea. I'm also a big fan of Behind the Mask: The Rise of Leslie Vernon, the aforementioned V/H/S movies, Man Bites Dog, The Borderlands (which has another title that I can't remember), REC, Grave Encounters, Willow Creek, and several more that aren't coming to me at the moment. Since found footage kind of saturated a lot of the market, I try to look for stuff I haven't seen done before.


How many of the people involved in the production would call themselves fans of the genre?

Well, all of my writers, Tonya Narvaez, Ignacio Zulueta and Dani Spinks, are pretty big horror fans. As are my directors, Puja Tolton and Nikki Menez. It was really important to me that the creative crew for the show were fans. It's hard to do live horror if you don't watch horror. There's an atmospheric and pacing precision there that a lot of non-fans don't understand, and therefore can't convey.


What’s the overall tone of HSTWS? Does it take itself seriously or go for the more satirical approach?

We are taking the genre elements very seriously. We hope we can make it work for the audience. There are of course comedic elements, but the sound design, the video design and the performances will all be sincere. No winking. I made a conscious decision after Funniest Play Ever, we wouldn't break the fourth-wall for Holy Shit. I want to create and completely maintain an unbroken atmosphere. Fingers crossed.


What are the pros and cons of translating this form of visual narrative to a live production?

Some of the cons are the spacial limitations, the technical limitations, finding clever ways to translate images or ideas that would normally be viewed in a tightly-edited package. You must literally think so far outside the box you end up in some weird neighboring box. For instance, creating a found footage feel to a live performance meant having characters come across old digital cameras or torn up journals or weird things under tarps. As they investigate, we literally see the story of how that camera or journal or that weird thing under the tarp came to be here. We thread multimedia into everything we do at Awesome Theatre, but my hope is to use this workshop production as a way to subvert the idea of video transitions or video backgrounds to scenes and really put the audience in the shoes of someone who can't believe what they're seeing.

The pro is the ability to dive into the meat of the horror. Utilizing sound, performance and very deliberate pacing to evoke what would normally take, again, a tightly-edited package, to convey properly.


Does HSTWS feature scripted dialog or was improv encouraged?

Everything is very scripted. My writers are wonderfully talented individuals. The pieces are only ten pages or so, but each one feeds the overarching narrative. We have created a shared horror mythology concerning an abandoned nature preserve and the unexplainable events that have plagued the area over nearly a century, so the writing was very important.


What role, if any, does the audience play in this production?

They have that old phrase, "If these walls could talk". I want the audience to be a fly stuck to the wall of an old, rotting cabin, subjected to these freakish events over nearly a century and not being able to look away.


What is your most memorable story from this production?

About 6 hours after we attended a day-long Bachelor Party for our Executive Director Anthony, Jess (our Technical Director and Artistic Producer) and I took two of the casts up to the Sibley Volcanic Preserve in Orinda to shoot all the creepy video and photo content. There's nothing quite like a wholesome Sunday family hike being interrupted by creepy hermits and bloodstained Cultists. So, you know, apologies to the nice people who sped up as they passed our crews.


Join me and several Overlook creatures as we venture into the theatrical depths of live found footage! HOLY SHIT THAT WAS SCARY is a one night only event happening Wednesday 10th at 7pm. You can connect with other people attending through the event page, and keep up to date with Awesome Theatre's latest projects by liking them on Facebook, Instagram, and Twitter!

Get tickets on Eventbrite while you can!