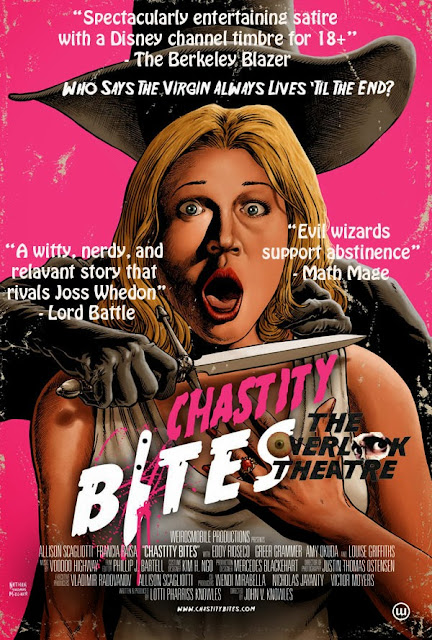 The Berkeley Blazer - "Spectacularly entertaining satire with a Disney channel timbre for 18+. The way gender roles & pop culture have congealed in this film is both refreshing and yet somehow nostalgic. More, please." - 4 Stars

Lord Battle - "The Blood Countess finally has a cool feature about her. Lotti Pharriss Knowles has written a witty, nerdy, and relevant story that rivals Joss Whedon." - 4 1/2 Stars

Book Wyrm - "I felt like I wasn't watching the same film as everyone else. Maybe it's because I watch this type of newage stuff a lot but I felt like I was watching an ABC family movie it wasn't a bad movie though." - 3 Stars

Huntress - "This movie was the perfect storm of a natural flowing script, a solid cast, and an enjoyable story. I don't think I disliked a single character." - 4 1/2 Stars

The Great Hornito - "A really witty hip current horror comedy. A cool mix of "Saved", "Veronica Marrs", Buffy and "Mean Girls". The cast was perfect and the movie had me cracking up the whole time. This movie gets a solid five. I wish I could give it more stars." - 5 Stars

Unicorn Slayer - "Enjoyable teen horror, it plays to a classic 90's vibe; cringe worthy moments and all. The protagonists felt real and relatable, and the feminist, role reversals were refreshing while not overbearing or tropey." - 4 Stars

Ice Giant - "Loved everything about this movie, the role reversal in the main characters relationship was especially clever and very well acted." - 4 1/2 Stars

I started the Overlook Theatre for two reasons, the first being that I thought I had a unique situation that would be fun to document. The second, and real reason, is that I love film and wanted to start a blog so I could receive screeners. Screeners (and yes this is for the 88% of people who somehow don't know what a screener is but read blogs?) are films that are sent to review sites with the idea that in return for a free copy of a film the site will offer up advertising. This has worked out kinda awkwardly in the past, as talking to a director about his film then screening it for people who haven't... It can get pretty cruel. Also, I realized I am a fan of things most people wish they could unsee (Retard-0 Tron III will be reviewed soon!).
Now that the wine has set in and I'm in full rant mode... Chastity Bites was awesome. I know I only gave it a 4.5 but I honestly think it's because I was tired from laughing and as it neared its end, was just plain worn-out. I have always thought Elizabeth Bathory was a very underrated horror character; I mean she married the first real vampire, drained a city of virgins, and bathed in virgin blood to retain her beauty... Yes. I think she was conceived to have Buffy stake her but that's just me (and Knowles apparently).
Above I said this film rivaled Joss Whedon's writing. What I meant by that statement was exactly what I said in my quote - a witty, nerdy, and relevant story. These things most often come from Joss Whedon, Somehow he knows what young people are saying and how to make them seem witty yet real. Still I'd say that "Chastity Bites" has a dialogue set to a Gilmore Girls pace but backed with Joss Whedon's insight.
Okay drinking and talking about a movie I like could result in an endless post but really I used this film as an apology for past terrible ones. "Chastity Bites" kicks ass and the only thing that could ruin this film is watching it alone and paying half attention to it. The Overlook Theatre loved this film and for 8 reviews to have seen this and given it a 4 means this is a film you must see! So watch it!
-Lord Battle

*Based on the star ratings turned in by character reviewers, others viewed and got to "Dislike" or "Like" but that does not effect the rating.
Posted by Lord Battle at 2:25 PM