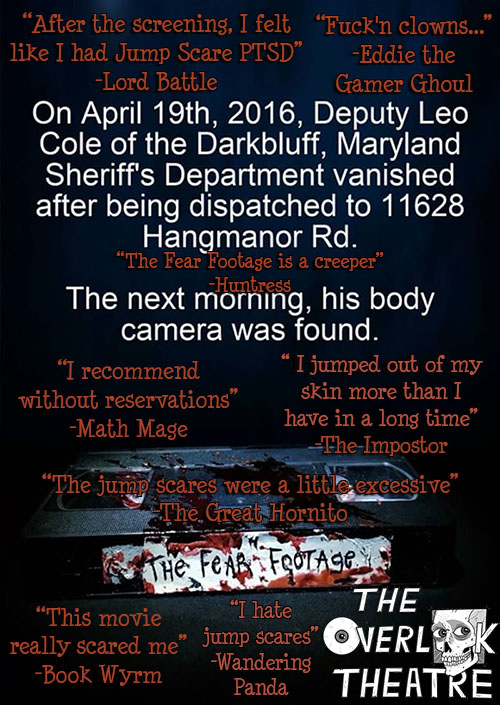 8 of 8 viewers "Liked" "The Fear Footage" (2018, USA)
Creature reviews have been minimally altered in an attempt to maintain their voice:

Lord Battle - "The Fear Footage is a found footage anthology film that's kicked off through the badge camera of an officer as he investigates a mysterious residence and watches a VHS tape. Do not be dissuaded by the opening POV segment as the following 3 stories are all traditional found footage. I don't want to spoil too much here, but one short follows a group of storm chasers speeding towards a storm. They hit a pedestrian out in the middle of nowhere and while checking to see if the victim is alright are attack by a cult. We're clearly not reinventing the wheel here, but simple setups, relentless scares, and the unpredictability of indie filmmaking charge The Fear Footage with an exciting and fun energy." - 3.5 Stars

Eddie the Gamer Ghoul (R) - "Fuck'n clowns..... Dat cop sat der an watched dem videos even as dat crazy stuff was go'n down. Da monsters were sub-par at best, though da clown was fucked up man. Da stories were interest'n but almost forced. All in all dis movie was so bad it made it kinda good. I in fact had fun watch'n it." - 3.5 Stars

Huntress - "The Fear Footage is a creeper! There's no way to foresee the depths this low budget anthology will reach when you hit play and that's the best way to go into it. What starts off almost disarmingly indie gradually spirals into monster infused madness and ends in outright haunted insanity. Watching The Fear Footage with the intention of tearing it apart because of its CG fopauxs or budgetary restraints would be a waste of a fun horror movie." - 4 Stars

Math Mage - "The scariest 70 minutes I've seen. I could nitpick (use 9-1-1 recordings instead of text scroll), but it was enjoyably terrifying. I recommend without reservations." - 5 Stars

The Impostor - "I'm always excited to check out found footage horror films, and while The Fear Footage may not be my favorite film from this subgenre it's definitely thrilling. I jumped out of my skin more than I have in a long time. The "tapes" are all full of very familiar scenes we've seen before but with a few unexpected twists. Overall The Fear Footage did work in a dark, loud room filled with friends but I feel I wouldn't have enjoyed it at home alone." - 3 Stars

The Great Hornito - "The Fear Footage is a found footage anthology that has some really great stories. The ideas for the 3 stories are all unique and scary as well. The jump scares were a little excessive and the CGI was bad at times but overall the movie was very interesting and scary." - 3.5 Stars

Book Wyrm (R) - "This movie really scared me and I'm not sure if it was because I haven't watched a horror movie in a while but one of the jump scares actually made me yell. I watched this by myself at midnight and when I went to give the DVD back, I was scared to walk down the hallway and stairs to put it back. When I saw someone coming toward me on the way, I yelled again. I hate panning camera movements and that's how a lot of this movie was shot. They make me so anxious I can't stand it! The shorts were really good and they really creeped me out so much so that I watched most of them from behind a potato chip bag so I wouldn't be as scared by the monsters." - 4 Stars

Wandering Panda - "Intense, loud, effective. I hate jump scares, but here there's more to them in this movie and they work. I was tense for most of its runtime. The characters are generic but not hateable, and they're weirdly interesting, especially the "I'm not on drugs" guy. All in all The Fear Footage is worth a watch, just follow the creator's steps; no lights, volume up, and don't look away." - 4 Stars

Jump Scares. What comes to mind when you hear someone mention the phrase "Jump Scare"? This is what I asked the creatures in attendance after screening The Fear Footage since it seemed to be the only thing everyone was commenting on. I also noticed that when most people refer to a moment as a jump scare, it usually means a moment that scared them in a negative light. I personally had always used the term to describe a cat running out of anything suddenly. So I asked the question:

Which would you prefer, an effective or earned scare?

My biases of this argument was that The Fear Footage contained a lot of jump scares, with around 90% of them landing. So even though you saw it coming, thought it was dumb, or essentially were scared out of your seat by an overly loud phone ringing, it didn't matter as long as you're engaging with the film and or having fun. I mean most people honestly become upset because they are embarrassed...
And just to be clear, jump scares can serve the purpose of relieving an audiences building anxiety to avoid the same audience creating unintentionally funny moments to the same effect.

The Overlook Theatre materialized in a Residence for a screening on 6/7/2018
*Based on the star ratings turned in by character reviewers, others viewed and got to "Dislike" or "Like" but that does not affect the rating.
Unknown at 6:16 PM
Share