Digging Up the Dirt with KillDozer and Director of Einstein's God Model, Philip T. Johnson

Last week, KillDozer picked the brain of actor/producer of Einstein's God Model, Kenneth Hughes, (which you can find here). Today he continues digging about this indie sci-fi film but this time director, Philip T. Johnson, will be answering his inquiries. 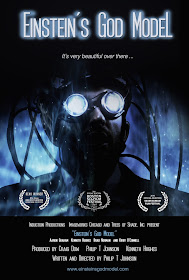 KillDozer:  Can you tell me how you became inspired to make this film? Did the subject matter come from personal experiences?

Philip Johnson: The original premise for the story came to me on a beach in Kaua’i, while I was reading Brian Greene's book The Elegant Universe. He does an amazing job of explaining complex physics like String Theory and M-Theory in layman's terms. The anecdote of Einstein describing the God Model was told to me by my former physics professor (who has a cameo in the film).


KillDozer: In being both writer and director on the film were you able to achieve everything you envisioned?

Philip Johnson: I don't know if a filmmaker is ever able to achieve "everything" they envision, but yes, we're very happy with the end result. The story and imagery evolved a lot from what was in the script to what ended up on the screen.

KillDozer: This film is a bit of an emotional roller-coaster at times. Which did you prefer directing and which is harder, the sorrow or the comedy?

Philip Johnson: Of those two, the comedy came easiest to me. I was fortunate enough to work with principal actors that had terrific comedic timing, so they certainly made me look good. I tried to sprinkle moments of wit throughout the story to relieve tension and make the characters more relatable. Achieving genuine and believable sorrow is such a big challenge for directors and actors. It has to come from a very deep, personal place inside someone. As a director, I do my best to create an environment on set where the actor can visit a memory or an experience that allows them to channel it into their performance. Basically, minimize distractions and get out of the way of their art.

KillDozer: From what I understand this film was funded by the film makers themselves, was this for total artistic control? How and why did you fund this the way you did?

Philip Johnson: Partially for artistic control, but, to be clear, you never have total artistic control (unless it’s just you and a camera). If you want talented people on your project, you need to allow them to bring their own gifts and resources to it. Your film will be better for it, as long as you stay true to your original vision and true to the characters. My day job is in anesthesia, so I spent a lot of long hours in the operating room earning the money to finance this film.
KillDozer: Tell me a little about the science in this science fiction tale. How far did you go to make sure the science was accurate? Who did you speak to?

Philip Johnson: All the science in it is accurate, even though the story itself has a fantasy element to it. I did a lot of research on string theory and m-theory during the script’s development, so when the characters are talking about things like "membranes colliding", "an object existing in two places at once", and "parallel universes", all of that comes from current literature. Our physics adviser, Daniel Record, is a veteran of the Apollo program, was a candidate for the teacher in space program, and a presidential national teacher of the year awardee. I ran all the science by him to ensure the physics elements were accurate. At our Boston screening, we had a Harvard physicist endorse the accuracy of the science. Much of the scientific design for the experiment itself came from a great book called Spook by Mary Roach. That is also where I learned of the interview Edison gave with Scientific American Magazine.

KillDozer: The machine in the film is beautiful. Did you have a specific vision for the machine used in the film? Did you make it yourselves?

Philip Johnson: I have a great affection for vintage electronics, and adore the craftsmanship that goes into them. It's like they're beautiful by accident. There was a lot of discussion about whether it should be one machine or a collection of devices. For the main component, I did both - I bought an antique steamer trunk off of Craig's list and mounted some of the more interesting electronics into it. Many of the props were built by my dad 50 years ago, and he generously donated them to the production. I found the old phone in the trash outside an Irish Pub when I was living in NYC years ago. Seriously, I could do a whole interview on this topic alone.

Still, without the artists, they are just props. Kenneth did a great job in his performance of operating the machine - his body language and focus conveyed a sense of purpose, like he knew exactly what each switch did. The other person who really brought the devices to life was Naaman Haynes and his team of audio wizards at Technicolor Sound. Their sound design and sound mix convinced even me that these devices were actually doing something!
KillDozer: The screenings at Silver Scream Fest went over extremely well and inspired a lot of conversation. What if anything do you hope audiences will take away from this film?

Philip Johnson: We heard that in Boston as well. People were telling us how their friends were still talking about it the next day, and I think that's the biggest compliment any film can receive. Kenneth and myself both have a passion for science, and we truly wanted to introduce people to these amazing theoretical physics concepts in a fun and exciting way. At the Silver Scream Q&A, one woman was asking for a reading list of books, so she could learn more about what we portrayed in the film. Sparking that curiousity and inspiring people to learn more is exactly what we want audiences to take away from it. What surprised me was how many audience members told us it hit home for them on an emotional level, whether it provided them some comfort in grief or reminded them to appreciate and love each day you have with those that mean the most to you.

KillDozer: I, like others that were lucky enough to see the film, will now be following your work closely as we can't wait to see whats next. Can you share any new projects you might have coming up?
Philip Johnson: I have outlines for several stories, but the one I'm developing next is also science-based. Obviously, I don't want to give the premise away, but it involves quantum entanglement.

KillDozer: Okay, now some fun quick questions- What was the last book you read and why?

Philip Johnson: The Martian ... because the first two times I read it, I couldn't put it down. I’m currently reading a book called No Better Friend ... a true story about a dog that served on a British war ship in World War II, and was ultimately a prisoner of war in a Japanese concentration camp.

KillDozer: What are your top 3 must-see science fiction movies?

Philip Johnson: Great question! I will try and skip the blockbuster films that most people are already aware of:


1. Primer
2. Dark City
3. Fantastic Voyage
KillDozer: Do you think Einstein would like your film?

Philip Johnson: Tough to say, since he was pretty suspicious of quantum mechanics, but yes, I think he would enjoy it.
KillDozer: Who is on your list of people you would love to meet some day?

Philip Johnson: My list for that has always been pretty short. There were just two people I had always wanted to meet in my lifetime, and I was lucky enough to meet one of them in 2010. After one of the last shuttle launches, people were just sort of milling around Kennedy Space Center at 7am. I noticed a man in a blue blazer walking with what looked to be his family and a NASA executive. It was Neil Armstrong. He was so excited, pointing to the gangway they walked on when boarding the capsule on Apollo 11 and a Gemini rocket like he rode prior to that. Amazingly, no one recognized him ... people were just walking right by. I introduced myself and he graciously shook my hand and let me get my picture with him. The other person, I've seen in concert, but never met ... Paul McCartney.

KillDozer: Who is the last director who impressed/inspired you?

Philip Johnson: That is a really tough question. There are so many. Duncan Jones did an amazing job directing a film called Source Code. I thought that was one of the most elegant marriages of abstract science and character study I had ever seen. Alex Garland's Ex Machina also belongs to this small club.

KillDozer: If you could have one piece of movie memorabilia from any film ever what would it be?

Philip Johnson: Whoa! I think it would be Keir Dullea's space helmet from 2001. I saw it on display at a Kubrick exhibit the LACMA was having, and it was all I could do not to break the glass and take it home. 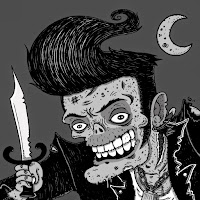